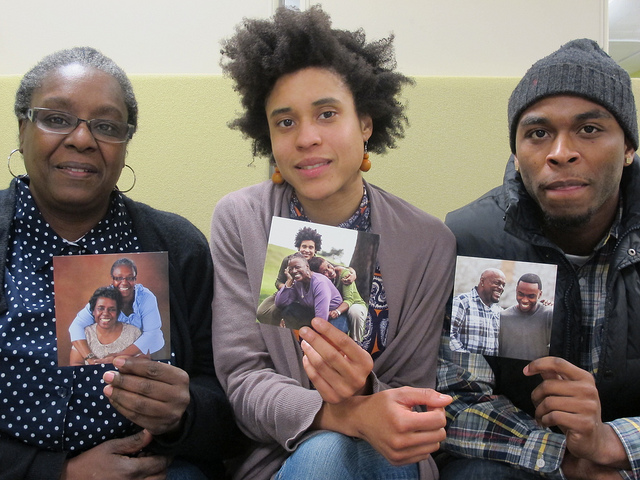 When Kingston Lenard, 22, was a freshman at Bradley Tech High School, he witnessed the bullying of LGBT students, but didn’t do anything to stop it. Then, he learned his favorite uncle, Ronnie Grace, HIV counseling, testing and referral specialist at Diverse & Resilient, was gay. He faced a choice to love and accept his uncle for who he is, or to reject their relationship altogether.

Lenard chose love. He explained that learning about his uncle’s sexual orientation “could have built or destroyed [their] relationship.” In the end, he said, “It built [our relationship] because I made the choice to accept him.”

Lenard’s story is one of 61 stories featured in Diverse & Resilient’s Acceptance Journeys project, begun in October 2011 to improve the health outcomes for LGBT people by sharing stories of love and acceptance and educating the Greater Milwaukee community about LGBT discrimination.

The stories are published on the project’s website and Facebook page, as well as on colorful story cards with photos of more than 100 project participants. The photos also have been posted around town on billboards, buses and bus shelters. Participants come from all walks of life. Mayor Tom Barrett, for example, was featured with former chair of the Milwaukee Fire and Police Commission Leonard Sobczak.

The project is the result of a 2009 study by the Centers for Disease Control and Prevention, in collaboration with the Wisconsin AIDS/HIV Program, the City of Milwaukee Health Department, and Wisconsin’s HIV Prevention and Testing Programs, to investigate a large increase in HIV infections in Milwaukee’s young African American gay and bisexual men. Findings indicated that the increase was indeed real and not merely the result of intensified testing. 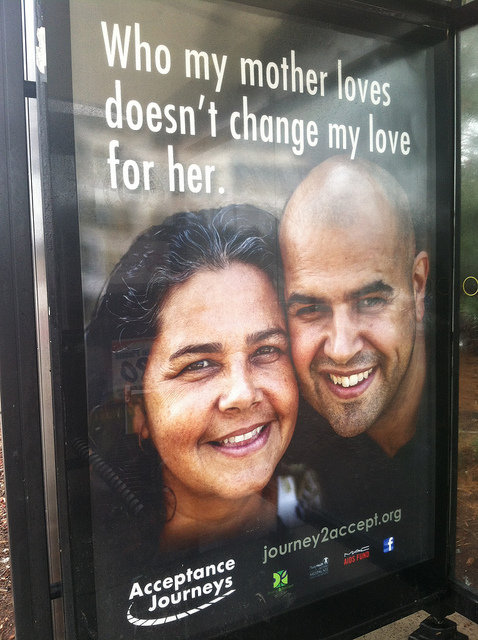 An Acceptance Journeys bus stop sign on Capital Drive and Richards Street reads, “Who my mother loves doesn’t change my love for her.” (Photo by Ciera McKissick)

The study also found that anti-gay discrimination plays a role in the transmission of HIV in the gay community, especially among gay and bisexual men of color. It causes housing instability, HIV stigma, a code of silence about same-sex behaviors and internalized homophobia. These may result in risky sexual behaviors, non-disclosure of HIV status, lack of concern about HIV and poor coping skills.

And, the effects of anti-gay discrimination go beyond HIV transmission rates to other health-related issues, including depression, suicide, substance use, and community violence.

“What we know is that self-esteem has a lot to do with a person’s preventative health matters,” said Brenda Coley, Diverse & Resilient director of special projects. “If you accept and love someone they have a better support system and they’re able to thrive and live healthy lives without having to face the stigma.”

That’s why the project targets the “larger heterosexual community,” said Coley. “They’re unaware of what oppression does to LGBT people because LGBT people mask it.”

This was the case for Lenard, who was transformed by his choice to accept his uncle. “I learned a lot about oppression and what it does to people. I came a long way. It changed my view on the LGBT community. I became more aware and understanding,” he said.

As a volunteer with Diverse & Resilient, Lenard now speaks out against the bullying he sees, and as a result, his choice has also changed those around him.

“I tell everybody about my uncle,” he said, including close friends who had previously made anti-gay jokes and comments. They no longer “engage in saying offensive things.”

He realized that for the most part, people did not mean to be hurtful, but “didn’t understand [what they were doing] and needed someone to tell them.”

Lenard’s conclusion mirrors the findings of the community interviews Diverse & Resilient conducted to develop the campaign. Focus groups found that people were unaware and wanted to learn more, said Coley. They also encouraged the campaign’s measured, multi-faceted approach, which uses indirect messaging to the community at large and story-telling in small group settings. Ciera McKissick, Acceptance Journeys program coordinator, called it “an intricate project” and a “gradual process.”

Despite the clarity of its goal, Acceptance Journeys’ signage is deliberately indirect so as not to create backlash and prevent people with anti-gay attitudes from learning about LGBT oppression. Beginning with the tag line, “Whose life can you change with love?” the messaging has progressively become more explicit as the campaign has evolved. Most recently, billboards and bus signs read, “Who my son loves doesn’t change my love for him.”

“We’re doing a journey with the [Greater Milwaukee] community. Whether they know it or not they’re on the journey just by seeing the billboards,” said McKissick. The hope is that when someone sees a sign, he or she will begin the journey to acceptance by visiting the campaign website, reading stories of acceptance and becoming educated about the discrimination LGBT people face.

Next up are more stories, as well as Spanish translations of stories. The project also uses small group presentations at workplaces and community outreach at festivals and places of worship to spread its message. “Anyone who touches the LGBT community we want to touch with this message,” said Coley.

That’s why it was so critical for Lenard to choose acceptance. “[He] can take this message to people we’re not going to be able to reach because of his own social networks,” she said.

Coley insists that a social approach, not just a medical fix, is important to improving the health of LGBT individuals. “Science does tell us that acceptance has to do with health,” she said. “When people see themselves as worthy, they have more skills to hear health prevention messages and their risk behaviors will be affected.”

Through the Acceptance Journeys campaign, Coley wants LGBT people to know that “as a community we’re putting our arms around you to keep you safe and healthy.”