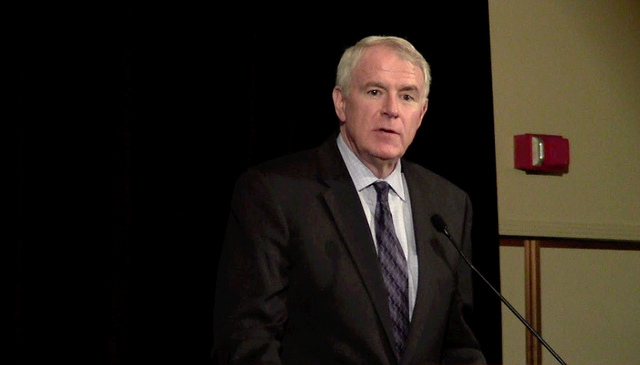 Taking advantage of a captive audience of 300 business executives, Mayor Tom Barrett urged them to call on their legislators to oppose a provision in the state budget proposal that would end residency requirements for public employees in Milwaukee and other municipalities.

The crowd was gathered at the Pfister Hotel to honor 10 companies and individuals recognized by The Business Journal for their contributions to economic development in the city.

Barrett pointed to the $5 billion drop in the city’s tax base since 2008 and the exodus of public employees in other cities following abolition of residency requirements as the reasons for his stance. The result was “downward pressure” on property values, he said. 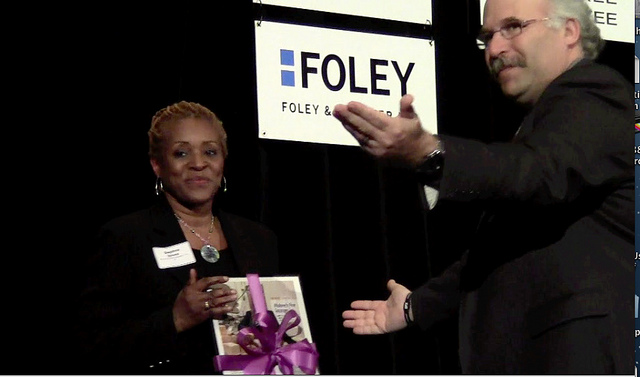 Daphne Jones of Malone’s Fine Sausages, Inc. accepts an award from the editor-in-chief of The Business Journal, Mark Kass. (Photo by Andrea Waxman)

“The reason that I’m asking you to do this is because quite honestly many of you probably have supported the governor and the Republican legislators. My request is for you to contact them this week and say, first of all, this does not belong in the budget and, second, this should be an issue of local control.”

Barrett added that Milwaukee has a lot of challenges that the city looks to the state for help on. “But the one thing that I do not look to the state to do is to hurt this city,” he said.

The crowd was gathered at the Pfister Hotel to honor 10 companies and individuals recognized by The Business Journal for their contributions to economic development in the city.

Individual awards were presented to Lynda Jackson-Conyers, publisher of the Milwaukee Times weekly newspaper serving the African-American community since 1981; Dan Bader president and chief executive officer of the Helen Bader Foundation for its support of the African American Chamber of Commerce; and Maria Monreal-Cameron, founder and executive director of the Hispanic Chamber of Commerce of Wisconsin for lifetime achievement advocating for the Hispanic community. Monreal-Cameron plans to retire in September after 24 years of service.