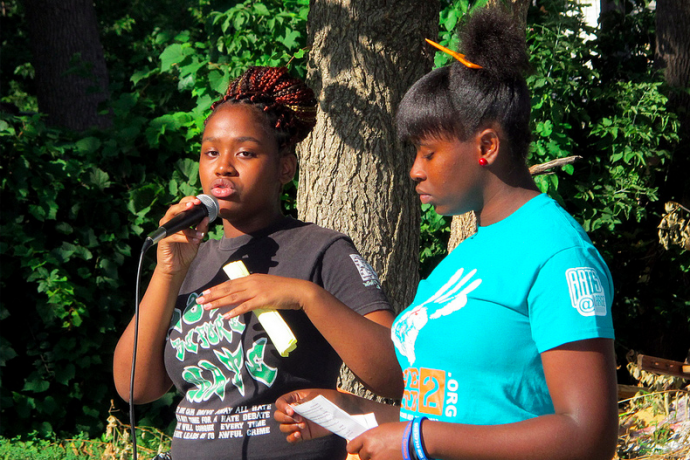 Laural Williams wants to help kids. She wants to be “the person they come and talk to if they don’t have anybody to talk to at home, the person who keeps their secrets and gives them positive advice.” Laurel, age 17, a senior at Washington High School of Information Technology, would like to stand in as an older sister for kids who need one.

A youth intern/mentor at Express Yourself Milwaukee, Williams joined with colleagues and teens from a half dozen organizations to take a stand against violence at the Fox Field Community Celebration for Peace near Washington Park. The event attracted about 50 neighborhood children and members of their families for art activities, drumming, singing, refreshments and a memorial to a slain teen from the neighborhood. 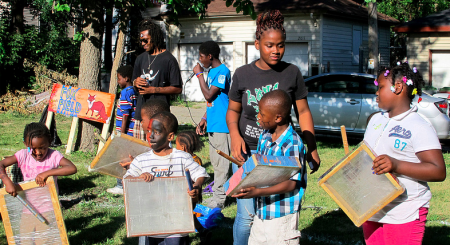 Fox Field, a vacant lot between two houses near the corner of 41st and Brown streets, was transformed into a football field for neighborhood youth a year ago.

Westside Academy middle school teacher Jennifer Koss wants to see other changes in the neighborhood. She has lost three former students in the last 18 months, all of whom died of gunshot wounds.

She urged young people to recognize the power they have to influence their friends to make safer, more positive choices. When you see peers making bad choices, she told them, invite them to do something else.

Neighborhood resident Renee Carver, who lives across the street from Fox Field, brought her little cousin, Baqueen Johnson, to the celebration. In addition to entertaining Baqueen, Carver came because she wanted to support the effort to promote thoughtful behavior among neighborhood youth. “There’s too much killing. Our babies aren’t even guaranteed tomorrow,” she said.

Vincent High School sophomore Vanisha Wallace-Nelson, who came with Our Next Generation, addressed the gathering and recalled her recent birthday. She had been anticipating a fun-filled, happy day. Instead, she ended up mourning a friend who was shot to death, she said.

Safe & Sound’s Drug-Free Communities Manager Elena Burke said the event was largely planned by area youth in cooperation with the organizations. They chose Fox Field because it is associated with positive youth activities, but also because 19-year-old Jamal Lowe was killed on the block three years ago.

“Our young people experience violence on a regular basis,” Burke said. The event was planned in part because they wanted to show that young people do positive things in their communities, Burke explained.