You are here: Home / Home / Carousel / District 3 police, residents bond on the ball diamond
Share this... 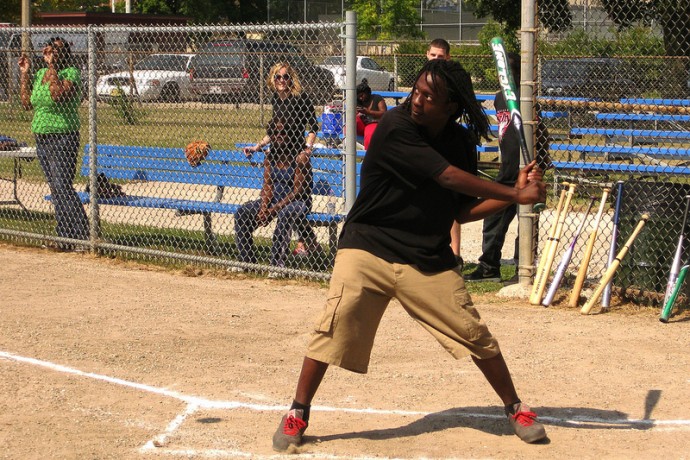 North Side resident Kevin Windom took a big swing at the plate at a recent softball game, hitting a home run and scoring two runs.

The three joined with other residents, police officers and representatives from several organizations at Merrill Park, 461 N. 35th St., for a community safety-themed softball game organized by Next Door Foundation to foster better relations between the community and police in District 3. 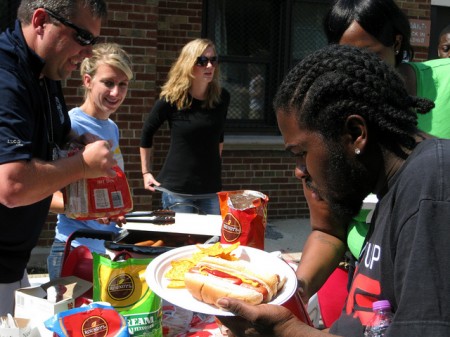 Off-duty officers volunteered their time to play in teams with local residents and Next Door parent ambassadors on Merrill Park’s softball diamond. Parent ambassadors engage families and children with community-building and educational activities.

Approximately 30 people watched or played in the 6-inning game, taking time out halfway through to eat hot dogs, chips and sweets provided by MPD.

Members of Next Door, MPD, Students Talking It Over with Police (STOP), the Merrill Park Neighborhood Association and Safe & Sound, which helped facilitate the game, attended the event.

Herbert Bowie, a parent ambassador, organized the game in cooperation with MPD to improve communication between District 3 police and residents.

“In my neighborhood, some officers that patrolled our area didn’t speak to us, and many people didn’t talk to them,” Bowie said. “I wanted to change that. The more community involvement we have with officers, the better we can make the statistics and outcomes in our communities.”

Many residents are apprehensive or even afraid to interact with police officers because of negative media portrayals, according to parent ambassador Bridget Howard, a South Side resident who batted in the game.

“We need to get the fear out of everyone and show them that police are not going to be violent toward them,” Howard said.

Cameron Burks, a parent ambassador who helped organize the event, said he hopes the game will help community members feel more at ease with speaking to police about nuisance issues such as abandoned houses and loitering. 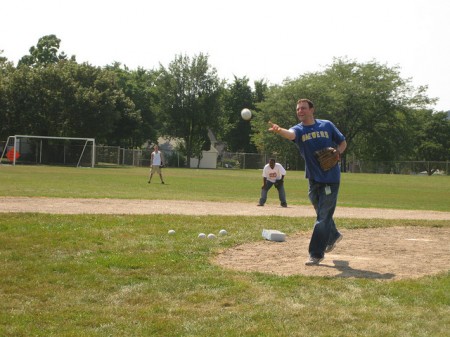 Ladwig, a community prosecutor in District 3, explained that crime could often be prevented by better communication between law enforcement and residents.

“If citizens know people with alcohol or drug problems, we can help those people get into a program,” Ladwig said. “If they know of people perpetrating violence, we can prosecute them. But we don’t always know who these people are. We need to form better relationships with the community to build our neighborhood capacity for when officers aren’t present.”

In addition to the softball game, Next Door organized two information panels with District 3 police earlier in 2013.

Next Door Foundation, 2545 N. 29th St. in Metcalfe Park, provides educational and developmental programs to children and families in the central city.

The game was the first of its kind in District 3, but both Bowie and Schmitz hope that it will not be the last.

“We had a great time,” said Schmitz. “This was a great way to break down barriers and create relationships, doing the simple things that make the biggest differences.”