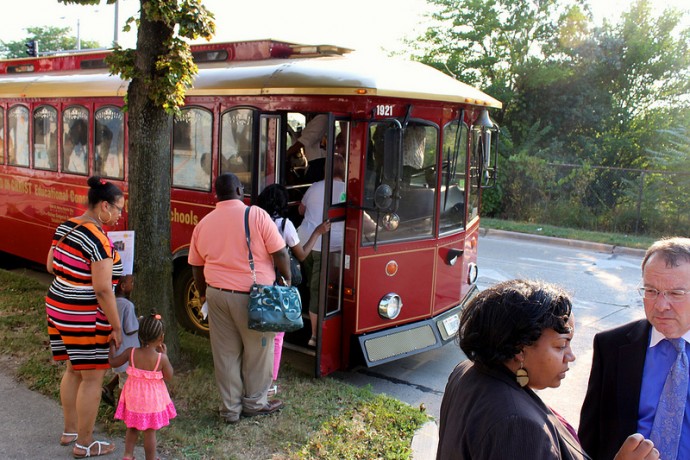 Participants board the trolley, as Alderwoman Milele Coggs and Rocky Marcoux, commissioner of the Milwaukee Department of City Development talk over the tour. (Photo by Mark Doremus)

During the first-ever Bronzeville Week in Milwaukee, a tour group piled into a rubber-tired trolley for a ride around the neighborhood and an update on the city’s efforts to redevelop the area.

The guides were Rocky Marcoux, commissioner of the Milwaukee Department of City Development, Deshea Agee, a city economic development specialist, and 6th District Alderwoman Milele Coggs, who represents the Bronzeville Tax Increment District and the Bronzeville Cultural and Entertainment District.

As the trolley puttered along, the trio teamed up to tout the area as a great place for private real estate investment and urban redevelopment.

The first stop on the tour was a brick house on the corner of W. Meinecke Avenue and N. Fourth Street that had been rehabbed by the city and sold, according to Coggs.

“Everybody can’t build from the ground up but there are beautiful homes with beautiful bones throughout the Bronzeville area so we are attempting to use the resources available to us to bring those to life,” Coggs said. 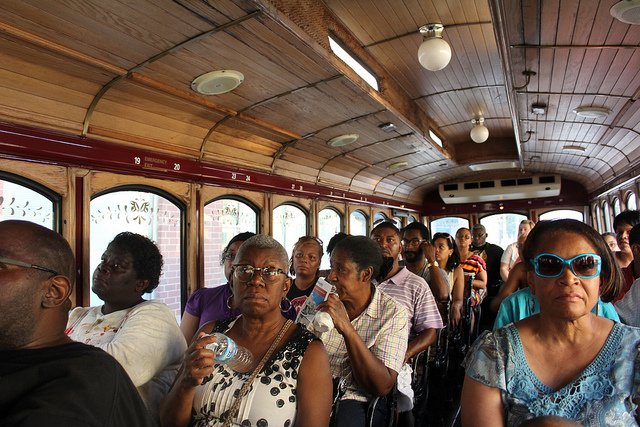 The trolley bus was full during the afternoon tour of Bronzeville. (Photo by Mark Doremus)

“A true well-balanced neighborhood has renters, it has owners, it has multi-family apartment buildings and it has very large single-family homes,” Marcoux observed, “and Bronzeville has that right now. That’s one of the reasons we think it’s saleable – it’s in a real neighborhood.”

“In Bronzeville we’re trying to do both the commercial and the residential,” Marcoux added.

As the tour continued, the guides pointed out a library, corner grocery, fast-food restaurant and a Walgreens.

“We have a library here, a Walgreens pharmacy, a Burger King. There’s an art gallery, a dance studio, a business center, a fitness center. … All of those things are right here on King Drive.”

The Bronzeville Tax Increment District (TID #59) was established by the Common Council in 2005 to restore economic vitality to an area that stretches from W. Garfield and W. Lloyd on the south to W. Center on the north, with a thin sliver running further north to E. Burleigh on both sides of King Drive. The east-west boundaries are 2nd and 7th streets.

The Bronzeville Cultural and Entertainment District is a small portion at the southern end of the TID. It was set up to recreate the old Bronzeville neighborhood along Walnut Street, which was the business, economic and cultural center of Milwaukee’s African American community from the early 1900s through the 1960s.

As the trolley, packed to capacity, ambled down King Drive, Marcoux talked up the commercial potential of Bronzeville. What the low-income neighborhood lacks in personal income, he argued, it makes up for in population density, and therefore purchasing power.

Walgreens’ 2009 investment in a new, expanded building on King Drive is evidence of a vibrant retail market in Bronzeville, Coggs added.

“When it was on North Avenue it was the highest grossing Walgreens in the region,” she said. “One of the reasons they moved here to King Drive was that they believed that with a drive-through pharmacy they could increase their sales by up to 30 percent annually. So there is no doubt that there is a lot of purchasing power in this area.”

“You don’t see a lot of trash and graffiti,” he said. “The city has invested a significant amount of money in the lighting, in the street itself, millions of dollars over the last 20 years.”

The tour soon arrived at the centerpiece of the Bronzeville TID, King Commons, a multi-use building with commercial space at street level and mixed-income residential units upstairs developed by the Martin Luther King Economic Development Corporation.

Some of the rental units are “Section 42,” which means the tenant earns 30 percent of the median income for Milwaukee County and some of it is market rate. “Nobody knows what you’re paying, you don’t know what I’m paying. All we know is that we’re living here together,” Marcoux said.

“The more multi-family buildings we can build on the main thoroughfares, the more customers there are for the businesses, he reiterated.

“You can’t turn the television on these days, you can’t turn on the radio without somebody talking about food deserts or healthy eating,” Marcoux observed. “Will Allen of Growing Power is the acknowledged leader of this movement worldwide. He chose MLK Drive. He made a statement he wanted to be in Bronzeville.”

“We’ve got to be willing to support people who were willing to put the money out and invest in us,” Marcoux said. “Get some of your folks that are visiting from out of town to come here.”

Eventually the trolley entered the Bronzeville Cultural and Entertainment District, the “postcard” view of Bronzeville for people who drive through on their way to and from the east side, according to Marcoux. “We want to make sure it’s as highly regarded as any other stretch of North Avenue.”

The trolley stopped just west of a banner strung high over North Avenue proclaiming Bronzeville Week. Across the street, as Deshea Agee pointed out, were the boarded-up America’s Black Holocaust Museum on N. 4th Street, and the derelict Grant’s Restaurant on W. North Avenue. The city owns both buildings.

“That museum needs to be in Bronzeville,” Marcoux said. “We are going to keep it until the community decides which way we’re going with this.”

Added Agee, “From what I understand, the board of directors hopes to open the museum back up, possibly in 2015.”

Further to the west the city has offered up a large plot of land, mostly vacant. The request for proposals went out in 2012 for the half-acre tract at 628-30 W. North Ave. and two adjacent vacant parcels. The asking price was $30,000. Despite the bargain price, as yet no one has taken the city up on the opportunity.

The 2005 plan for the new Bronzeville envisioned broad, tree-shaded sidewalks, pocket parks, and a mix of restaurants, bars, nightclubs, shops and art galleries along North Avenue. None of that has come to pass. Last year the city added decorative crosswalks, benches and trashcans, along with some signage, but with the notable exception of the Vangard Group’s renovation of the Inner City Arts Council building, no new development has occurred in the cultural and entertainment district since the plan was unveiled.

The Bronzeville Advisory Committee has not met since last spring and, according to information available online, and the appointments of four of the five members have expired.

Nevertheless, Marcoux remains bullish about the prospects for the Bronzeville Cultural and Entertainment District. “Ultimately, the goal of the city is to own nothing,” he told the tour group. “But because the city does own it we can control what happens, and that’s important.”

Turning south on N. Sixth Street, the trolley stopped at a new house in the middle of the block on the west side of the street.

“What we want in Bronzeville, in addition to businesses,” Agee said, “is property owners like Tara Ali.“ Ali rides her bike to work at Manpower. “She bought this lot for a dollar and built her home here.”

“Tara Ali could build anywhere she wants,” Marcoux added, “but she chose to build here in Bronzeville.”

The city will sell up to 20 vacant lots in the new Bronzeville for a dollar to anyone who promises to build a single-family home on the site. So far, six buyers have stepped forward.

The tour’s last stop was a vacant lot between the I-43 Freeway and N. 7th Street.

“That is one of the biggest pieces of land that is located next to a freeway exit in the entire city Milwaukee,” Marcoux said. “It would be very difficult for anyone to assemble that amount of land that close to the freeway and that close to downtown. We have very high hopes about this development.”

The tour ended where it began, at the Vangard development. The restored building opened in February 2011. According to city tax records it is still owned by its previous occupant, the Inner City Arts Council. The lower-level office-commercial space is vacant, as it has been most of the time since the building opened.

Agee put a positive spin on the prospects for Bronzeville as the tour wrapped up.

Despite the successes elsewhere in the area, the North Avenue cultural and entertainment district has not materialized. From the trolley, tourists were nowhere to be seen.