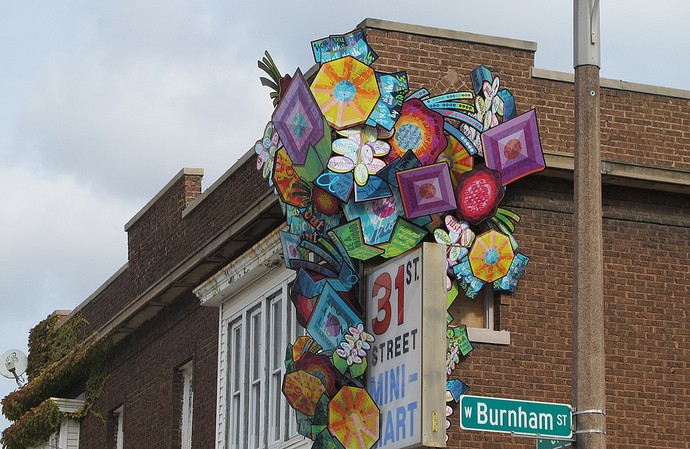 “An Arrangement,” one of four public works of art that make up “Typeface,” was installed on the boarded-up 31st Street Mini-Mart. (Photo by Andrea Waxman)

Autumn leaves are falling and will soon give way to snow, but on a corner in the Burnham Park neighborhood residents were pleasantly surprised when flowers popped up recently.

A large colorful floral bouquet constructed of metal and plastic suddenly sprouted out of the upper corner of the boarded-up 31st Street Mini-Mart at 31st and Burnham streets.

“It brings a lot of life to the neighborhood,” said Tracey Sroka during a visit to the community where she used to live.

The bouquet is one of four public art installations collectively called “Typeface.” Created by Milwaukee artist Reginald Baylor and storyteller Adam Carr, the four art works in different city neighborhoods are rooted in community conversation. All are located on abandoned or foreclosed properties.

Each of the installations was crafted around the neighborhoods’ history, identity, and personality, Carr explained. Another consideration was the ways in which the abandoned sites relate to the surrounding “built environment,” he added.

“When you to see a big empty space or when you see a foreclosed building, what does that say about the surroundings?” he asked.

In Burnham Park, Carr interviewed 100 residents over a period of a year. To engage them in conversation, he posed the simple and intentionally open-ended question, “Why here?”

“Responses to that prompt are collected in ‘An Arrangement,’ a bouquet as vibrant as the community’s cast of characters,” according to the Typeface Web site.

Spending time in the neighborhood, talking with people on the street, playing soccer in the park and observing what he described as “the extreme density of life there,” Carr’s conversations with residents took many directions. They expressed apathy, triumph, sorrow, boredom, death and life, he said. The core of each interview is posted in a gallery on the Web site.

Baylor incorporated fragments of the interviews by printing words and phrases in different typefaces on the flowers in the bouquet: “explore;” “I want;” “It’s the same as the Dells but no water;” “Now we are old;” “People: In, Out, In, Out, In Out.”

“I thought it was pretty cool when I saw it,” said Mason Wilkinson, a former resident of Burnham Park. “It adds color to the neighborhood and character to the city.”

Neighborhood resident Juan Cruz had passed the art installation several times but wasn’t sure what to make of it.

“I’m thinking it’s something to do with the [nearby] school. I don’t know much about art. I don’t know what it is, actually. It looks like life, kids…” Cruz said.

Cruz’s reflection on the neighborhood and its inhabitants were exactly what Carr hoped to inspire. “[T]hat’s the point – thinking about your environment, thinking about your relationship to it, who’s in control of it. … These are important questions to ask,“ Carr said.

“I don’t think it necessarily has to be obvious,” Baylor said. “You can enjoy it for its face value. My hope is that it’s just generally a beautiful work of art that people learn to like in their neighborhood.”

The other Typeface installations include “Panel Discussion” in Sherman/Washington Park, “Puzzled and Amazed” in Harambee and “Bookshed” in Lindsay Heights.