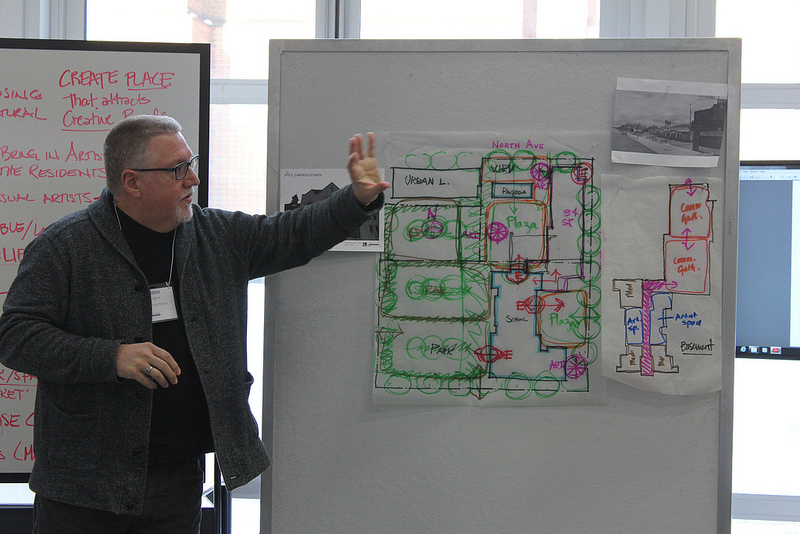 Loft apartments, a boutique grocery store, a jazz club and a multi-story hotel were among the ideas for redeveloping Bronzeville at a recent daylong brainstorming session at the University of Wisconsin-Milwaukee.

At the start of the event Carolyn Esswein, founder of Community Design Solutions, acknowledged that the original plan for a year-round tourist destination in Bronzeville anchored by the Black Holocaust Museum and offering ethnic music, art and cuisine has not progressed very far. The museum closed its doors in 2008.

“Today will be a discussion of broader options,” said Esswein, an adjunct associate professor in the University of Wisconsin-Milwaukee School of Architecture and Urban Planning.

Community stakeholders including architects, developers and community members had previously identified, in focus groups, the six sites that were examined at the event, which organizers called a “charette,” a meeting of interested parties to resolve conflicts and map out solutions to problems. Community Design Solutions compiled the data from the focus groups. 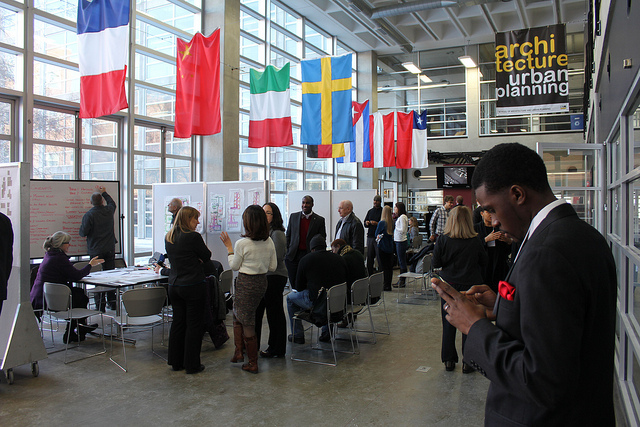 Architects, developers and others gathered at the University of Wisconsin-Milwaukee to discuss the future of the Bronzeville redevelopment district. (Photo by Mark Doremus)

The city established the redevelopment district in hopes of recreating the African-American commercial and entertainment district on Walnut Street that was dismantled by urban renewal and freeway building decades ago.

At the charette, participants seemed to recognize that commercial development might need to lead, rather than follow, arts, entertainment and cultural initiatives.

Organized by Sixth District Alderwoman Milele Coggs and the Milwaukee Department of City Development, the session brought together small working groups of architects, area residents and business leaders who tossed around ideas for each of the six sites each of the six sites and then reconvened to report the results of their discussions.

Site 1 is sandwiched between the I-43 North-South Freeway and North Seventh Street below West North Avenue. A proposed vertical landmark building would mark the western edge of the new Bronzeville. Architects Engberg Anderson suggested a multi-story hotel, a jazz club and an apartment complex for the site, with big digital billboards over the freeway announcing Bronzeville attractions and generating advertising revenue.

Site 2, as envisioned by Miller Architectural Group, would have an enclosed winter garden on the corner of North Avenue and North Sixth Street, with apartments and street-level commercial space next door.

Site 3 is on North Avenue between North Fifth and Sixth streets. American Design, Inc. proposed townhomes along Sixth Street, with commercial space where the street intersects with North Avenue. The team sketched out a second, multi-story mixed-use building east of the corner, and called for a small amount of tenant parking and green space as well.

Site 4 includes the building that once housed Garfield Avenue School, and extends from West North Avenue to West Garfield Avenue. Quorum Architects proposed a complex plan for this location, which the city has considered buying from the Milwaukee Public Schools for an African-American cultural center. For the school building, Quorum envisioned residential housing, studios and galleries for artists, as well as performance space. Quorum also proposed tearing down the former Black Holocaust Museum building, north of the school, and replacing it with housing and commercial space for shops, restaurants and entertainment venues. 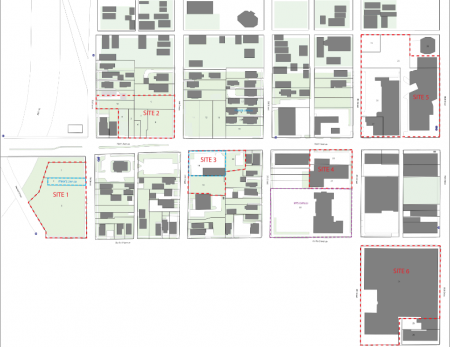 To the west of the school there would be open space for outdoor events, and further to the west, off of Fifth Street, a large parking lot would replace the existing playground. Grant’s Soul Food Restaurant on North Avenue, or at least its pagoda roof, would be preserved as a public space and entryway into the redeveloped site.

Whatever happens, Coggs told the crowd, “There has to be a public and cultural use integrated into the Garfield School development. We’ve promised that to the community.”

Site 5 is the eastern cornerstone of the Bronzeville redevelopment district, where a Dollar Tree store was proposed earlier this year but rejected by residents who demanded that a grocery be located on the site.

Here, Korb Tredo Architects proposed four large structures. A boutique grocery store would be nestled on the corner of North and King Drive, with a café out front and residential units upstairs. Korb Tredo suggested a cultural venue as an alternative if market demand won’t support a grocery store. Next door on North Avenue, the firm proposed a 150-seat theater that could show movies or host live performances. North of the theater, extending along West Fourth Street and then east on West Meinecke Avenue, would be an L-shaped cluster of townhouses and multi-story apartments. Finally, in the northeast quadrant of the block Korb Tredo envisioned a new, multi-story building for current occupants Chase Bank and Hong Kong Express, with apartments on the floors above.

Continuum Architects and Planners was responsible for the final location, Site 6, which comprises almost an entire block at the intersection of King Drive and Garfield. This area, which includes the old Schuster’s and Gimbels department stores, is currently used by a trucking company, C. H. Coakley, as a warehouse and distribution center.

Michael Coakley, a company representative, was at the Bronzeville planning session. He said the best use of the building would be office space with retail on the first floor. He estimates that 300 white-collar workers could easily occupy the building, and their presence in the neighborhood would jump-start other commercial enterprises such as coffee shops, restaurants and retail establishments.

However, Development Commissioner Rocky Marcoux made it clear that the city would not accept an office complex at that location. “You need to get off the office space,” Marcoux advised Coakley. “I’d encourage you to focus on housing.”

As an alternative to office space, Continuum Architects and Planners proposed a phased approach, starting with loft-style apartments above street level and an early goal of removing the building’s sheet-metal facade to return it to its original appearance. A welter of other possibilities was suggested, both by the architects and the crowd: perhaps the Milwaukee Ballet could relocate there along with a school of dance? Could the site host a year-round indoor marketplace of small specialty shops, or a grocery store? Suggestions included retail, residential, arts, entertainment and education venues.

At the close of the day, Esswein said Community Design Solutions would gather up all of the drawings, suggestions and computer files and compile them into a final report to be delivered to the city early next year.

Then, developers and investors will decide which, if any, of the ideas make sense from a financial standpoint.