You are here: Home / Home / Carousel / Favorite of 2013: Volunteers dispatched to count Milwaukee homeless
Share this...

In my opinion, homelessness is one of the most important issues facing the city. The story was fascinating to cover, given the variety of people, including police officers and volunteers, who worked tirelessly to conduct the count. It also was interesting to hear directly from people who were homeless, many of whom said they did not want anyone to feel sorry for them. Lastly, the story resonated with me because of the complexity of the issue, both in terms of obtaining the count and solving the problem of homelessness in Milwaukee.

David Marble held a cardboard sign, pleading for money from motorists whizzing by him as he stood on the median dividing a busy street, a few blocks west of Potawatomi Bingo Casino.

“It’s so humiliating, you have no idea,” said Marble, who has been homeless since three back surgeries and a neck surgery left him unable to work.

“The same people get off of work and they see you night after night and it’s so disheartening when they give you nothin’,” he said. “You can’t blame these people. Are you going to give every night? You ain’t going to do that. I wouldn’t do that.” 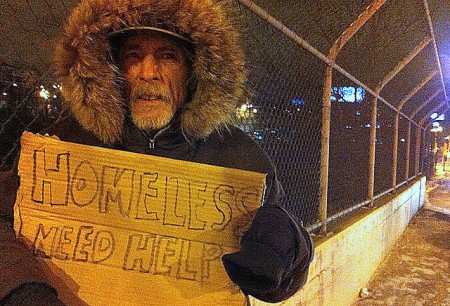 Marble, 56, is one of the individuals surveyed during Milwaukee’s “You Count” effort, intended to get a statistical snapshot of all of the sheltered and unsheltered homeless people in the city.

The effort involved dispatching volunteers throughout the city throughout a 24-hour period to find and survey people who live in parks, under viaducts, along the river and in alleyways.

Volunteers also visited meal sites and the Milwaukee Public Library, where homeless people tend to gather, especially when it is cold.

“We are trying; we do our best and that is why we have such an expansive effort, but we are never going to be able to find everybody,” said Evan O’Brien of the Hope House of Milwaukee, who helped oversee the count.

“It’s never going to be a flawless system. The difficult thing is the unsheltered population, just pinpointing where they are,” O’Brien said.

In addition to asking the homeless person his or her name and date of birth, the survey consisted of questions regarding living situation, employment and reasons for homelessness. The survey also asked whether the respondent is a victim of domestic violence or disabled.

Homeless people were also invited to Hillside Family Resource Center, 1452 N. 7th St., where they were surveyed. At the center, they were able to connect with services and receive much-needed items such as coats, sleeping bags and hygiene products.

“This is a big helping hand … a little here and a little there helps out,” said Dwayne, who has lived on the street for about two years, as he enjoyed a hot cup of coffee.

The final tally of unsheltered homeless individuals will be added to a head count of homeless people who checked into any of the shelters in Milwaukee on Jan. 30.

The count of sheltered homeless is kept in the Homeless Management Information System, a database run by the Milwaukee Continuum of Care and coordinated by O’Brien.

The U.S. Department of Housing and Urban Development mandates an annual count by organizations that serve the homeless and receive funding from the agency. 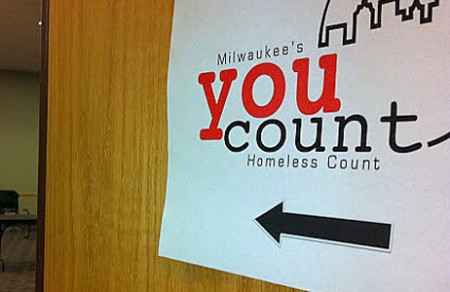 A sign greets individuals to the “You Count” event at the Hillside Family Resource Center. (Photo by Brendan O’Brien)

“We have no idea what we will get tonight. Winter is a tough time because it’s so hard to get a good unsheltered count,” O’Brien said.

According to volunteer Nicki Wooters, a social worker at St. Catherine Residence for Women, “It’s a whole other culture that I wasn’t even aware of. They (homeless people) have their own hierarchy.”

Trust and loyalty are currency within the homeless hierarchy. Many people are part of small bands that claim spots under viaducts, trade clothing such as coats and gloves, and watch one another’s backs.

To protect themselves, many sleep with makeshift weapons nearby, while other just don’t sleep, Wooters said.

The Milwaukee Police Department’s Homeless Outreach Team also was part of “You Count.” Their job during the night was to help find the city’s chronically homeless people, who sleep in abandoned warehouses and under viaducts throughout the dark, cold city.

After searching for about an hour with no luck, a pair of MPD team members cautiously walked down an icy concrete staircase and under a viaduct near the Mitchell Park Conservatory domes.

A ray from one of the officer’s flashlights pierced through the darkness, and the pile of blankets on the concrete slab began to move. Jimmy, a homeless veteran dressed in a Packers sweatshirt with several layers of clothing beneath, rose up and politely greeted the officers.

“It’s not safe. Got to carry something like that,” said Jimmy, 59, pointing to his left shoe near his transistor radio.

In the shoe was a silver box cutter.

One of the officers quickly took it away while they chatted with Jimmy, making sure he was not sick, injured or too cold.

Jimmy said he has been homeless on and off for about six months after losing his job and getting kicked out of his home.

He also said he earns a small bit of cash by helping out at a homeless shelter and has family that he can stay with when it gets bitter cold. But for now, pride gets in the way.

“I don’t ask nobody for a damn thing,” he said, his eyes overflowing with tears as he laid back down.