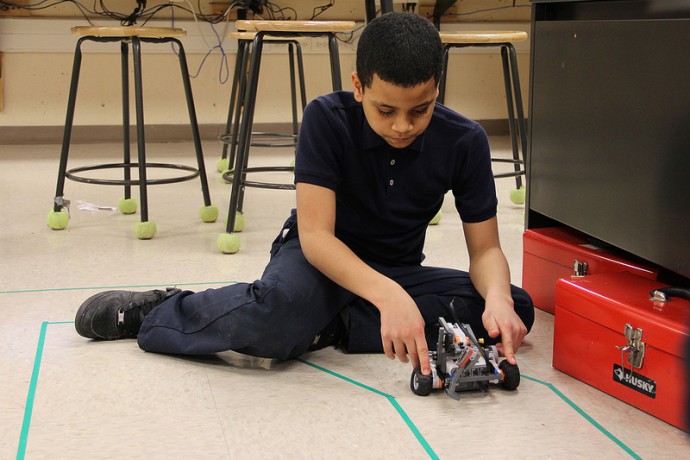 A student tests his robot at a recent open house at La Causa Charter School. (Photo by Karen Slattery)

Nine years ago, Andrew Hurie, then a teaching assistant, showed up for his first day at La Causa Charter School, 1643 S. 2nd St. in Walker’s Point, and stepped into a building nothing like the one he sees today.

“There was no library; no developmental program,” recalled Hurie.

A decade later, the striking red, cream and blue-hued building is home to a state-of-the-art K4 through 8th-grade MPS charter school with a sprawling third-floor library and much more.

Nowadays, a visitor walking into classrooms at 2 p.m. might see students creating bomb-defusing models in an engineering class, teens in a music class performing a composition they wrote, or seventh graders creating 30-second commercials with i-Movie video editing software in a production lab.

There are also language and math labs, most stocked with Macs, Smart Boards and other modern technology that even some college students have limited access to.

When the school, which celebrated its 10th anniversary recently, first received MPS charter status, the focus was entrepreneurship, according to Maria Ayala-Smith, director of education. But, as the needs of the community and society have changed, so did the school, she said. 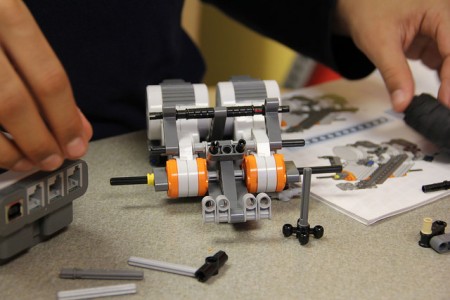 Building robots is part of a STEM class at La Causa. (Photo by Karen Slattery)

Grants have allowed administrators to lay foundations in fine arts, STEM (science, technology, engineering and mathematics) and other fields that are helping students gain skills to prepare them for the 21st century workplace.

“They’re developing teamwork and collaborative skills that they will need as adults,” Hurie said.

One need in the community that hasn’t changed is bilingual education.

The school, which has grown from 300 to more than 800 students, is still largely based on the principle of allowing students to retain and continue learning in their native language — Spanish.

Ninety-four percent of La Causa students are Hispanic and 55 percent speak English as a second language, according to Ayala-Smith. The school utilizes a developmental  approach to language instruction, which entails an initial focus on the native language with English instruction gradually increasing at each grade level.

The model used at La Causa retains more native language instruction than most bilingual models, which phase in English in increments until the ratio is 90-10 English to the native language. At La Causa, it’s common for a class to be reading both the English and Spanish versions of a novel by the upper grades, said Hurie.

The school also introduces English at a quicker rate than traditional developmental models as a result of state assessment tests. The tests, which affect funding, are given in English only to third and eighth graders each year.

A previous NNS report found that English language learners (ELL) outperform their non-ELL peers, with the disparity growing as ELL students increase their level of English proficiency. Ayala-Smith sees the same pattern at her school.

“We see the improved results in the higher grades but with the stakes being so high in testing it’s one of the biggest challenges we face,” Ayala-Smith said. She added that educators will continue being proactive about improving scores and helping students overcome the disadvantage of being tested in a language many are still learning.

Ayala-Smith, who spent 13 years at Milwaukee Public Schools as a bilingual teacher, believes that maintaining fluency in Spanish not only benefits students in the classroom but helps them maintain communication at home as well.

Maria Carmona, who has two children at the school, said when her kids started there they spoke only Spanish. Carmona, like many parents, speaks limited English and said she’s learning the language along with her children.

But, Spanish continues to be the primary language spoken in their home. “We don’t want to lose that communication with our kids,” said Carmona, in Spanish.

Carmona, a member of the Parent Teacher Organization, said communication challenges still arise, particularly when her kids need help in subjects such as science, but that teachers are always available to help overcome those challenges.

Teaching ESL students involves a high level of coordination, according to Ayala-Smith, and five academic coaches, teachers and parents work together to chart out a plan to identify areas in which students need additional help in school and at home.

“I talk to the teachers and they let me know if there’s a problem; they do their part at school and we have to do ours at home,” Carmona said.

Another challenge the school faces is poverty. Ninety-five percent of La Causa students are classified as disadvantaged, according to the state. But, because La Causa provides a variety of social services including crisis stabilization, shelter and substance abuse treatment, the school learns about problems and offers help immediately, according to Ayala-Smith. She said many parents have had to place their child in La Causa’s emergency nursery when they weren’t able to care for them.

“It helps because we don’t have to reach outside; we can get someone to help from within,” Ayala-Smith said.

The school has a waiting list of about 75 students each August. A lottery process is now employed to select new students each year.

Those who enroll can expect to read “La Casa en Mango Street” (The House on Mango Street), or perhaps compete in a robotics challenge at Rockwell Automation, something Hurie didn’t foresee when he walked in the door nine years ago.

“This has been a school that has truly been transformed,” he said.