This is one in an occasional series of articles about finalists for 2014 Milwaukee Awards for Neighborhood Development Innovation (MANDIs).

On a recent sunny Wednesday afternoon, Jan Christensen, 61, walked from the editorial office of the Riverwest Currents, the newspaper she edits, to the Riverwest Co-op & Café, a block away.

The air was cold so she moved briskly.

Christensen reached the entrance to the alley at the middle of the 800 block of East Clarke Street as a car was fast approaching.

The driver braked hard, music blaring through the closed windows.

Christensen broke into dance moves to the beat of the music as she passed the car.

The driver broke into a smile.

Christensen is an organizer in the Riverwest neighborhood. Her job is paid for through a community block grant to the city, through the U.S. Department of Housing and Urban Development (HUD). 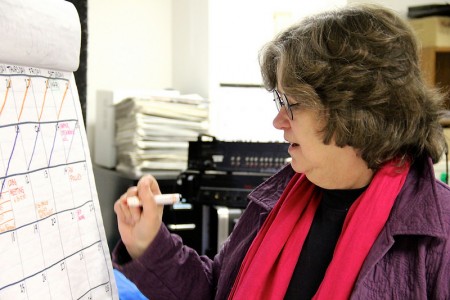 Jan Christensen calls neighborhood organizing rewarding. “You get to see change happening all around you,” according to Christensen.

She helps neighbors bring to life the projects they dreamed about when they helped create a neighborhood strategic plan in the 1990s.

All but the bakery are up and running. Said Christensen, “There’s a new bakery that might make it as a co-op bakery, so we might hit that one.”

She works on other projects as well. Passionate about urban agriculture, Christensen said she is excited that the neighborhood is involved in the Young Farmers of Milwaukee, a community-supported agricultural effort in the city.

High school students get clients who pay, up front, for them to plant and tend to a garden plot in Kilbourn Reservoir Park in Riverwest for the summer. The young farmers then deliver the produce to the clients, according to Christensen. “By bike,” she added. “Kids earn money that way,” she said, and learn to appreciate urban agriculture.

Space is tight in Riverwest, which has 4,000 households. Whatever space is available, she said, “we try to convert into parks or gardens.”

Christensen is a finalist for a MANDI (Milwaukee Awards for Neighborhood Development Innovation). She said she is thrilled, adding, “It feels like kind of a crowning glory to a really long career of hard work.”

At the Food Co-op and Café in a brick building at the corner of Clarke and Fratney streets, Christensen met with James Godsil, a Milwaukee activist and a finalist for the same MANDI award last year, at a table next to a window overlooking Clarke Street. They spent time spinning ideas for the neighborhood’s future. “Visioning,” said Christensen. “Visioning,” echoed Godsil with a grin.

Christensen’s father, a farmer, helped her develop her work ethic, according to Christensen. He told her to “see what needs to be done and do it.”

Her organizing philosophy is to identify the “gifts, skills and passions” of the people in the community and match them up with projects. She assists people in determining what needs to be done and figuring out what “we can do ourselves and how we can ask for the help we need for the things we want done.”

By help, she explained, she does not mean asking for money to throw at a problem.

For instance, in exploring co-op housing, she discovered a hitch “because there is an ordinance in the city that no more than three unrelated people can live together in the same building. So we need a little help to change that ordinance.”

Vince Bushell, publisher of “Riverwest Currents,” said he respects her for putting down roots in the area. “This isn’t the kind of work you can do for three years and then move on.”

Christensen said she has spent her time over the years building the neighborhood in which she wants to live.

She is scheduled to retire from her organizing job next year.

Her dream for her own future, said Christensen, is “to grow tulips and have nice young farmers delivering fresh produce to my door.”

Editor’s note: An earlier version of this story had the wrong address for the Food Co-op and Café. It is at E. Clarke and N. Fratney streets. We regret the error.