You are here: Home / Home / Carousel / Walk with a Doc in Washington Park paves path to better health
Share this...

Those are just three reasons why walkers took to the paths in Milwaukee’s Washington Park Saturday morning.

The walkers trekked through the park with Dr. Jess Kuester, an internist and geriatrician affiliated with the Medical College of Wisconsin and the Milwaukee VA Medical Center.

The walk was the first in this year’s “Walk with a Doc” program, co-sponsored by the Progressive Community Health Centers, Froedtert Health and Washington Park Partners (WPP).

Rosalind Cox, a Washington Park neighborhood resident, said that good health was only one reason for turning out for the event. She said that the walk also promoted community. “People are out walking and chatting,” Cox observed. 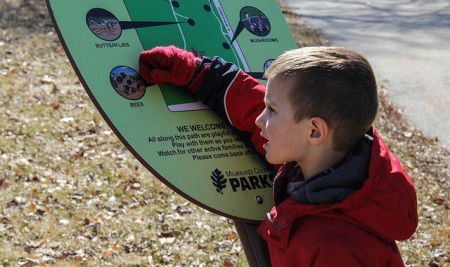 Ben Tiedge was the youngest walker to participate in Washington Park’s “Walk with a Doc.” (Photo by Karen Slattery)

Before starting through the park, Kuester gave a short lecture on the importance of calcium and Vitamin D. She told walkers that people need calcium each day so that their heart, muscles and nerves work properly.

Kuester encouraged walkers to get calcium through food such as yogurt, fortified orange juice and cottage cheese. She pointed out that people can get calcium through supplements, but medical studies are mixed about whether they can increase the risk of cardiovascular disease.

People need vitamin D to help absorb calcium but the vitamin is naturally present in only a few foods. Kuester cautioned not to take too much vitamin D in supplements, but rather get it by spending some time in the sun, although not too much time without sunscreen.

She also noted that engaging in weight-bearing exercises, such as walking, helps build strong bones.

Following her own advice, Kuester walked briskly around the park with nine other people. The walkers were enthusiastic about the doctor’s participation. “It is a good thing for people to walk with doctors. Doctors promote exercise,” said Rochelle Parker, a member of the group.

Organizers said they hope more people will show up for the “Walk with a Doc” program on the first Saturday of each month.

The program began last year but walks were canceled when the weather got cold.

Bob Hershey, who has walked for exercise for 15 years, was already striding through the park when the event began. He joined the group, saying he appreciated the effort because it “promotes using the park.” Hershey said he logs 20 miles a week in the park when the weather is not too cold and the walkways aren’t icy.