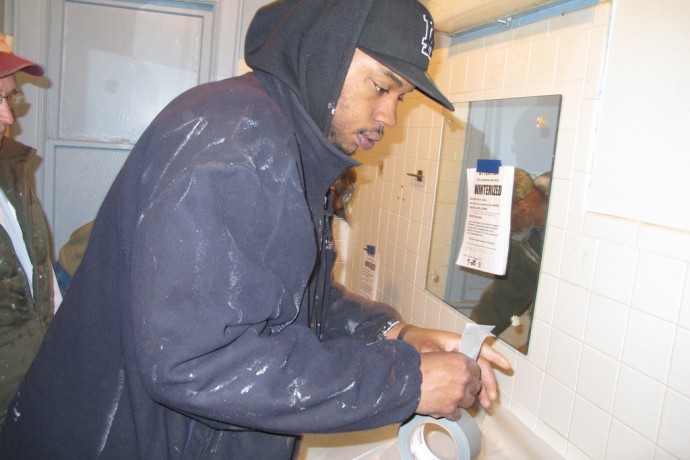 Tobias Brumfield seals off an area before he begins lead abatement work in the upstairs bathroom of a Milwaukee home. (Photo by Edgar Mendez)

Forty percent of abatement workers for the Social Development Commission’s Lead Hazard Reduction Assistance Program who were tested had elevated levels of lead in their blood, according to Ofelia Mondragon, manager of the program.

Seven contractors worked with SDC to have their employees tested. According to Mondragon, blood lead tests revealed that about a dozen of the 27 workers had blood lead levels above 10, the threshold at which the Milwaukee Health Department intervenes when children are tested.

Though that level is not necessarily dangerous for adult workers, they risk exposing their own children to the lead-saturated dust particles they’re exposed to at work. 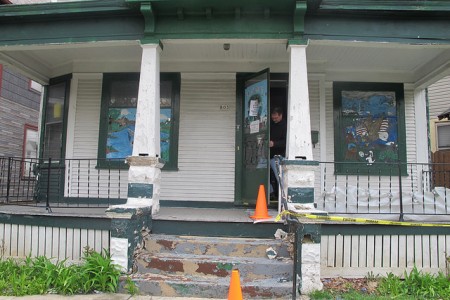 A Layton Boulevard West house is the site of a series of workshops on lead-safe work practices for local contractors. (Photo by Edgar Mendez)

In response to the test results, SDC has partnered with Layton Boulevard West Neighbors (LBWN), and the Wisconsin Department of Health Services (DHS) to run free lead-safe work practices workshops for local contractors. The workshops are being conducted at a home in the Layton Boulevard West neighborhood that had been foreclosed, but is now being rehabbed as part of LBWN’s Turnkey Program. The house will be completely renovated, made energy efficient and sold later this summer.

The workshop provided an opportunity for lead-safe worker Tobias Brumfield, of Milwaukee, to stay current on state regulations while focusing on controlling the dangerous worksite dust.

“It’s really easy to breathe it in,” said Brumfield.

The workers are trained in real-life scenarios. At a recent workshop, the trainees were removing and containing lead in a house where four children, two under 6 years old, live.

Once they’re given the outline “they create their action plan and get to work,” Mondragon said.

Hasan said the city is especially challenged by lead exposure, compared to others in the state, due to the dense concentration of population and old housing stock.

Ninety-two percent of the housing stock in the city of Milwaukee has lead in it, much of it hidden under layers of paint, according to Ramona Jensen, outreach manager for the SDC program.

In many homes, especially those built before 1950, the layers of newer paint eventually peel and chip away, exposing crackled layers of dangerous lead-based paint known to cause damage to the brain and other vital organs and lead to behavioral problems, learning disabilities and seizures in children.

“There are a lot of kids in Milwaukee and a lot of problems with exposure,” said Hasan.