You are here: Home / Posts from Community / Youth discuss violence and their future
Share this... 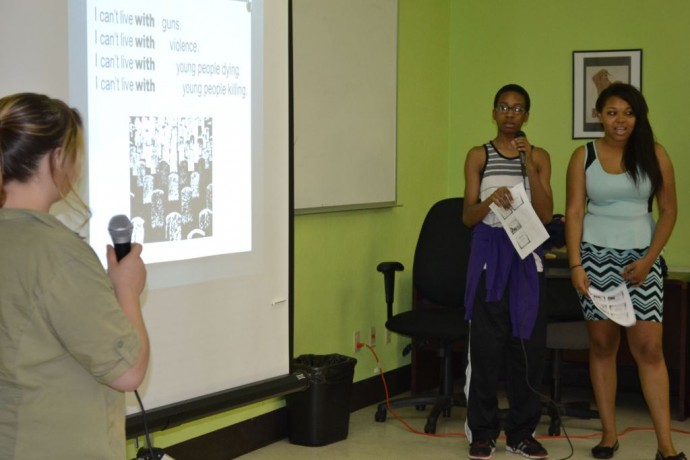 The youth of Milwaukee are concerned with the violence they see surrounding them and what it means for their future. That was the feedback from dozens of young people who gathered this past weekend at the Social Development Commission (SDC) Youth and Family Development Program.

Core Team members of the “A Single Bullet” project addressed their peers during the gathering at SDC Richards Street to present the findings of a half-year study for the project funded by Safe and Sound. The young people have been talking with Milwaukee Police, the Homicide Review Commission, the Project Ojima of Children’s Hospital and community leaders about gun violence and its impact on all residents, not just those who are immediately affected by a shooting. The young project members presented case scenarios involving gun violence to the gathered youth and then led a discussion on what they had in common and what could have been done to prevent them.

H2O Milwaukee presented a music video made with the help of local high school students that was video-taped and recorded in Milwaukee. The video was shot along well-known streets of the city and emphasized for the youth that the violence that seems so common on the evening news is happening right where they live.

SDC Commissioner Dr. Demond Means also led a spirited discussion among the youth as part of the agency’s Task Force on Youth and Poverty. He posed several questions to the young people that sparked a lively give-and- take from the youth about the challenges they face and what help they see as needed by the community. Dr. Means noted that the Task Force is currently gathering ideas and suggestions that will be presented later this summer to policy makers at the local and state levels and promised that their feedback will be heard.

The young women and men expressed a number of concerns during the resulting discussion. Many of the ideas given by the youth focused on the need for them to be able to access productive jobs that will provide a positive way to earn money. The young people also expressed concern about having schools that will challenge and help them, the need for respect from adults, and the need for programs that can help give positive alternatives to risky behavior, especially for pre-teens.

The youth walked away from the full morning with the message that they can have some control over their futures. They were urged to take positive steps to create a better Milwaukee for themselves and those who will come after them. And that, they heard, starts with how they value themselves and each other.

As Jessica Sims reminded them, “The grave will claim you if you don’t think you are worth more.”