You are here: Home / Home / Carousel / Curbing violence in Milwaukee will “take a village”
Share this... 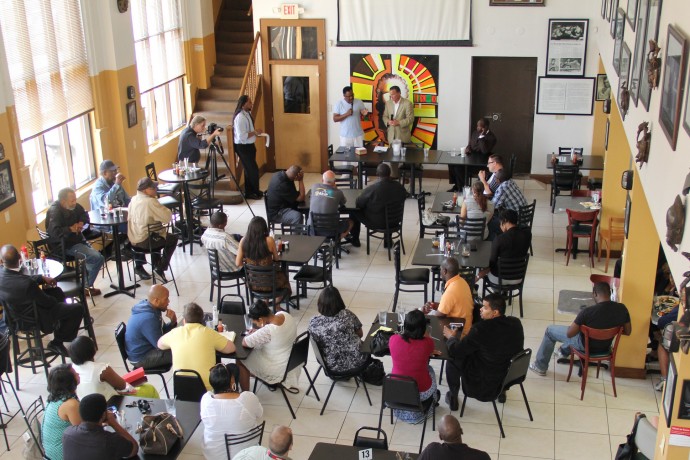 The town hall meeting on the growing problem of gun violence in the city attracted a full house. (Photo by Karen Slattery)

Calbe Mosley sat next to his grandmother, Auriea Mosley, or on her lap for more than two hours Sunday afternoon at the Lindsay Heights coffee shop, Coffee Makes You Black, 2803 N. Teutonia Ave. He quietly played with her cellphone and his shoe. The toddler was too young to know that the adults in the room were talking about him, and other children just like him, wondering how to keep them alive and safe.

More than 70 citizens, including politicians, pastors, parents and grandparents such as Mosley participated in the town hall meeting to wrestle with the growing problem of gun violence in the city.

Since the year started more than 180 shootings have occurred. At least 30 of the victims have been children, some less than 3 years old.

Sequanna Taylor, in the audience with her children, is worried about them and others. Taylor, a paraprofessional at Samuel Clemens Elementary School, 3600 W. Hope Ave., said one of the shooting victims was a student at her school. “If it affects one of us, it affects all of us,” she said. 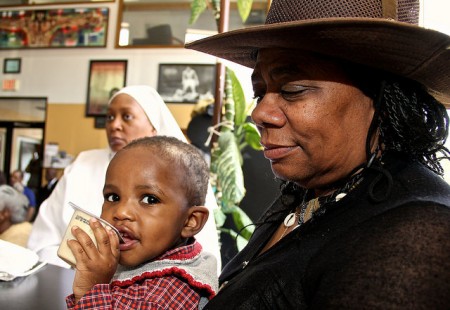 Calbe Mosley and his grandmother Auriea Mosley participated in the conversation on limiting gun violence in the city of Milwaukee. (Photo by Karen Slattery)

The event, hosted by Milwaukee Journal Sentinel columnist James Causey and former WMCS radio talk show host Earl Ingram, Jr.,  was intended to come up with ideas for stemming the violence. With the large crowd and an open microphone, the comments flowed.

Most agreed that neither the government nor police could solve the problem. Many acknowledged the role that racism, poverty, the lack of black male father figures in the home and the state’s gun laws play. But they also insisted that the solution, in part, would have to come from within the community.

Gun violence must be reduced “neighborhood by neighborhood, block by block,” according to Rev. John McVicker, Sr., of Christ the King Baptist Church, 7750 N. 60th St.

Prophet/Elder Malcolm Mwendwa Hunt, of the Least of These International Ministries, Inc., 1036 W. Atkinson Ave., said he “walks the streets every day talking to young people.” He said that by approaching the young men in high crime neighborhoods, “we could put a big, big dent in this crime.”

David Crowley, 28, echoed the theme, saying everyone needs to take responsibility for what is going on. “Home is the city, not just a house. Make sure everyone is taken care of.” He added, “Stop being afraid.”

Those who did not take the microphone also had ideas. Fifteen-year-old Kenneta Lewis, there with his mother, said he was shot in the wrist while hanging with “the wrong crowd.” He said the incident taught him a lesson. “Don’t be around loaded guns,” he said, adding that he now stays in the house after 10 p.m.

State Sen. Nikiya Harris Dodd, who represents the 6th District, argued that keeping guns out of the hands of criminals should be a top legislative priority. She said she witnessed the problem firsthand when someone got shot across the street as she campaigned door to door.

Ingram said jobs would offer a “solution to much of the problem,” adding that people want to work and without jobs, they “are doing whatever they can to survive.”

Citizens can create jobs in their neighborhoods, according to State Rep. Evan Goyke of the 18th District.). “Invest $10,” he said, waving a $10 bill. “Hire children and young adults to do yard work and clean up the neighborhood, to help older adults tend to their lawn or paint their house.” He said it is done in some areas in the city and told the group, “You can do this on your block.”

Saying blacks are “too divided,” William Muhammad, minister of Muhammad Mosque #3, 4202 N. Teutonia Ave., noted that there needs to be unity among African American citizens in the city if progress is to be made.

The conversation ran longer than the scheduled two hours, enough to try the patience of any toddler. But Calbe Mosley was the picture of patience, at one point reaching for the charms on his grandmother’s silver bracelet that caught the light of the summer sun coming through the window.

Mosley, 61, said she doesn’t know the long-term solution to the problem that threatens the children and young black men. She echoed the call for getting churches involved and for unity. She also suggested that individuals create their own jobs. “If you can sew, make clothes. “If you can bake, make pies.”

When the gathering broke up, Mosley put her grandson down on the floor and he was off to explore. As the adults gathered in small groups to visit,  they kept an eye on the youngster as he wove his way between the tables in the long room, learning the lay of the land.

“He’s free at last,” she commented.