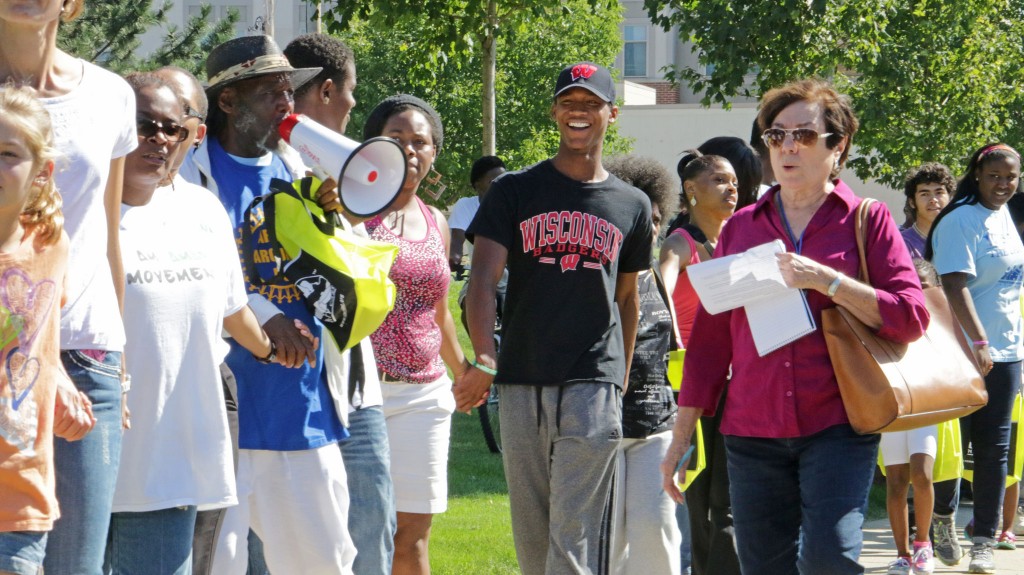 Participants hold hands at the Arms Around Us event in Metcalfe Park. (Photo by Stanford Brookshire)

Linking arms to display physical unity and a commitment to working together to revitalize the Metcalfe Park and Amani neighborhoods, hundreds of residents, police officers and elected officials gathered on a recent Saturday afternoon for an event called “Arms Around Us.”

The event was organized by the Building Neighborhood Capacity Program. Milwaukee is one of four cities chosen to be part of the federal initiative to promote healthy neighborhoods.

Some participants wore Arms Around Us t-shirts and colored wristbands, while others wore white t-shirts with black, red and green letters that read, “I am Amani United and Proud.” The group marched from the Fitzsimonds Boys & Girls Club, 3400 W. North Ave., to the corner of N. 35th Street and North Avenue, where they began linking arms. 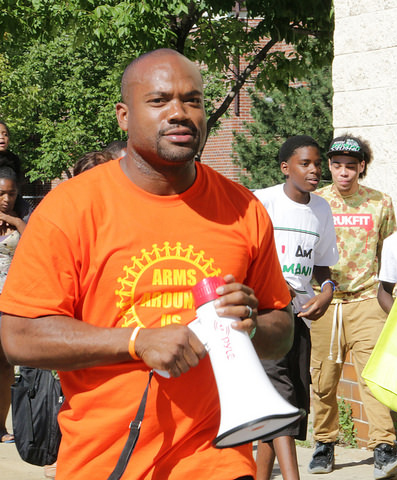 Residents sought commitments from the elected officials to help transform the neighborhood. Among the ideas were better public transportation and the cleaning and maintenance of open lots to beautify the community.

Elected officials and neighborhood representatives from Metcalfe Park, Amani, Sherman Park and Washington Park signed a contract committing them to a healthier, safer neighborhood and to work towards a better Milwaukee as a whole.

Wearing a bright orange Arms Around Us t-shirt, Ald. Russell Stamper, whose district includes Metcalfe Park, affirmed to the crowd that he “stands committed to promoting safety and a clean, safe, healthy neighborhood.”

Added State Rep. Evan Goyke of the 18th District, “I’m here to learn, to connect and hear from people. There are a lot of problems in Milwaukee, but events like this show a concentration and a dedication to solving one problem at a time.”

Danell Cross, one of the event’s coordinators, said that community leaders hope to bring together an “inner-city community council, as one community to work together on the issues that plague us.”

“We learned a lot from this event,” Cross added. “People want to come together to help solve problems.”

After the march, residents returned to the Boys & Girls Club for a picnic-style-lunch of hotdogs, brats and chips. Musical entertainment and face painting were provided for the children. The event also included a resource fair with information for residents provided by The Hope Network, Running Rebels and Children’s Hospital of Wisconsin.

Many people from outside of the Metcalfe and Amani neighborhoods participated, as a sign of their commitment to restoring neighborhoods throughout Milwaukee.

Charles Carmickle, a Washington Park resident, said that the community has been “psychologically pulled apart. Events like this will create a family in the neighborhood. We’re all a family.”