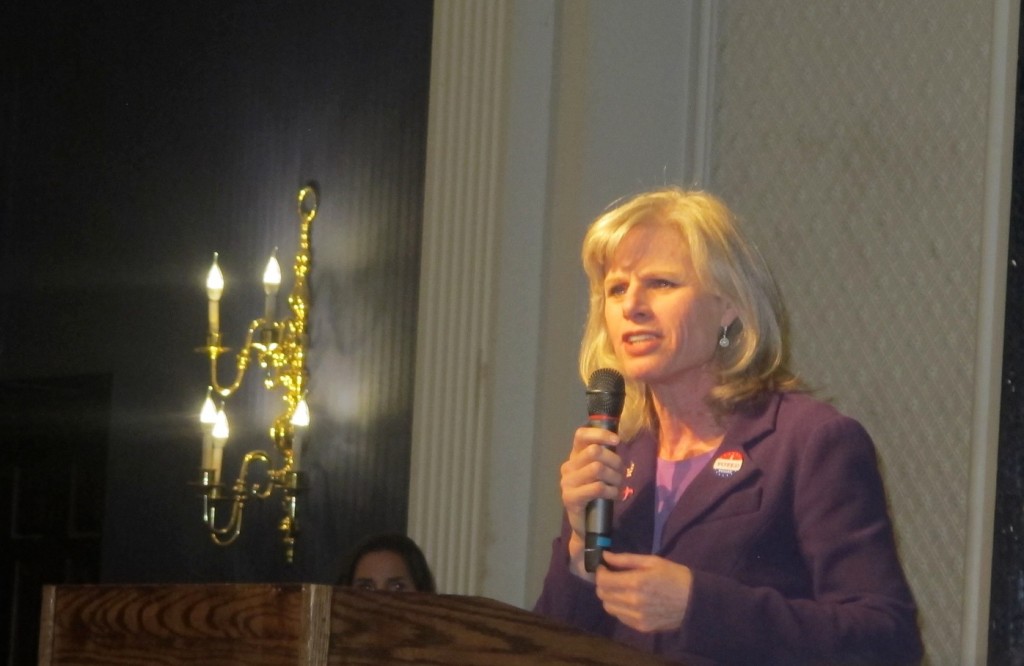 During a brief stop on the campaign trail, gubernatorial candidate Mary Burke announced support for legislation aimed at allowing undocumented residents to get a driver’s card and drive legally at a meeting hosted by the Southside Organizing Committee (SOC). An overflow crowd of more than 500 people attended.

After taking several jabs at Gov. Scott Walker, Burke said her plan is to give all Wisconsin residents “a fair shot.”

“That means being able to get a driver’s card so you can get to and from work,” she added. 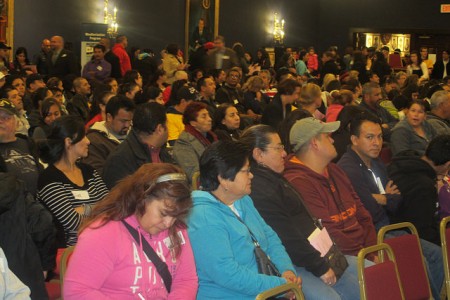 An overflow crowd of more than 500 South Side residents packed American Serb Hall, 5101 W. Oklahoma Ave., to hear the legislators respond to their concerns. (Photo by Edgar Mendez)

“We need our cars because the jobs are not on the South Side; they’re out there,” said Fendt, referring to the suburbs.

No one from Walker’s camp showed up, although he was invited to the event, organizers said. Democrats including Sen. Tim Carpenter, State Rep. Mandela Barnes and Mayor Tom Barrett addressed the crowd.

The bill, rejected during the last legislative session, would have allowed undocumented drivers to apply for a REAL ID non-compliant driver’s license after fulfilling requirements determined by the Wisconsin Department of Transportation (DOT).

The ID cards would have served as licenses for those unable to obtain or renew traditional driver’s licenses due to lack of proper documentation such as a Social Security card.

Zamarripa pledged to continue to push for legislation aimed at providing driver’s cards for undocumented residents. It was not clear whether she intends to reintroduce the legislation tied to REAL IDs.

During the past three months, SOC volunteers collected more than 8,000 signatures requesting a driver’s card program that would allow undocumented workers to drive legally and obtain licenses. Those signatures will be delivered to both candidates for governor, organizers said.

Fendt claimed that since 2007, more than 65,000 Wisconsin residents, most of whom live on the South Side, had lost the ability to renew or obtain a driver’s license.

Jonathon Zuniga, a UWM student, said his mother and uncle are among them.

“My mom’s been here 22 years, working and paying taxes. My uncle has been here 24 years and bought a house which he pays property taxes on, but they can’t renew their license,” an animated Zuniga told the crowd.

While Burke and others pledged their support for a driver’s card and other initiatives, Ulises Sepulveda stood at the back of the jam-packed room, arms crossed and shaking his head.

“I’m not impressed,” he said, referring to the pledges of support from legislators. Regarding Burke’s comments, Sepulveda said, “Where was all this action for Latinos when she was working with Doyle?” Burke served as Commerce Secretary in Gov. Jim Doyle’s administration.

Still, he said he hopes driver’s cards become available to all workers. Other attendees also walked away hopeful that change would come.

Lupita Aguila, who attended the event with her 2-year-old son, Galileo, said she believed Burke and other legislators could make the plan to provide driver’s cards a reality.

“Latinos will be the majority in this state one day, and our representatives need to come through for us,” said Aguila in Spanish.