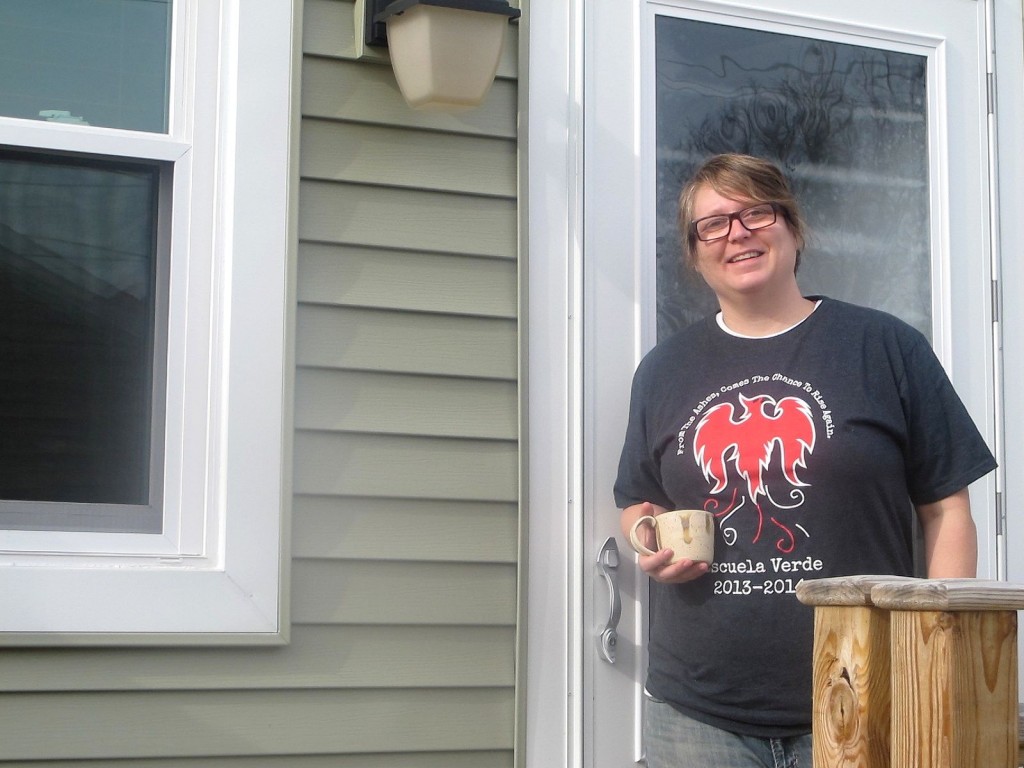 Joey Zocher, who teaches at the nearby Escuela Verde, said she purchased her Turnkey home in July to become part of the LBWN community. (Photo by Edgar Mendez)

Joey Zocher, an advisor at Escuela Verde, recalls going online and seeing floor plans for the renovation of a vacant property in the Burnham Park neighborhood of Layton Boulevard West.

What Zocher, a renewable energy enthusiast, didn’t know at the time was that she’d eventually call the Turnkey Renovation program duplex home. Turnkey homes are foreclosed properties that have been rebuilt with a focus on refurbishing old craftsmanship and energy efficiency.

Zocher joined dozens of residents recently for the 20th annual community gathering of Layton Boulevard West Neighbors (LBWN), where she remarked on how the two-story, solar-paneled home and other amenities drew her to the neighborhood.

“It’s the rain barrels, the turnkey homes and the parks; this is an amazing neighborhood,” Zocher said. 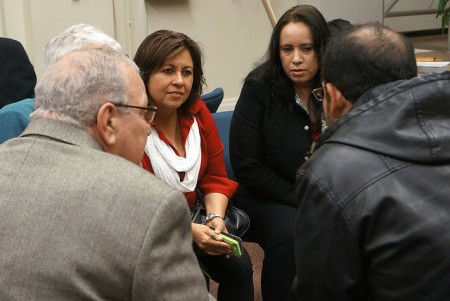 Renovating homes such as the one Zocher purchased in July are part of LBWN’s effort to improve the physical infrastructure of the neighborhood by improving private properties and public spaces, which is one of seven key initiatives comprising the area’s Quality of Life Plan, launched in 2011. Other initiatives include the creation of a community safety network and increased social engagement.

In addition to the turnkey homes, LBWN also worked to bolster the neighborhood’s infrastructure by awarding 95 home improvement grants totaling $70,000, which spurred an additional homeowner investment of more than $200,000 in 2014, according to Daniel Adams, neighborhood plan coordinator for LBWN.

“It was a domino effect,” Linnea said. “Once we fixed one thing we wanted everything around it to look good.

The Bielinskis took third place among 56 entries in LBWN’s Most Improved Home Contest this year.

In addition to home improvements, four new businesses and the Escuela Verde school, run collectively by Zocher and a group of teachers, moved into LBWN over the past year, organizers said.

“We wanted to be part of this neighborhood’s quality of life plan,” Zocher said.

And while signs of economic progress are everywhere, so are reminders that improving the quality of life in LBWN is an ongoing process. On a sidewalk on South 33rd Street, only blocks from Zocher’s home, sits a makeshift shrine marking the area where 40-year-old Alfonso Estrada-Cortes was beaten to death by a group of individuals after being involved in a minor car accident earlier this month.

LBWN organizers held a moment of silence in Cortes’s honor during the annual gathering, while reminding neighbors to look out for one another.

Still, most nights in the neighborhood are calm, said Zocher, and days are filled with the sounds of children at play. Chances to increase social engagement are everywhere, she said.

“The parks in this neighborhood are filled; I never felt a sense of community like this before.”