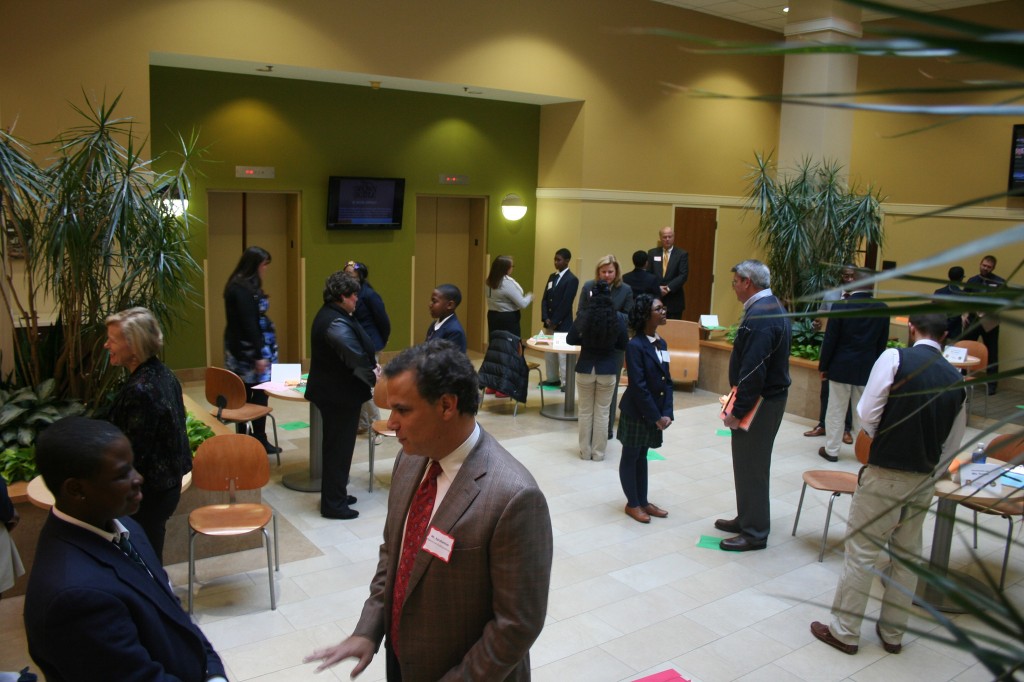 Students and judges interact during the preliminary stage of The Great Handshake competition. (Photo by Jabril Faraj)

Students, teachers and administrators from Milwaukee College Prep (MCP), a network of public charter schools, gathered in Schlitz Park recently for The Great Handshake championship. The event culminated a weeks-long effort at the school’s four area campuses that focused on improving students’ character and interpersonal skills.

“We believe knowledge plus character paves the road to college and beyond,” said Robert Rauh, CEO of Milwaukee College Prep and founding principal of the inaugural 36th Street campus. “Soft skills — skills like grit and perseverance and determination and joy and optimism — we find are just as important … if not more important than academic skills when determining success in college and beyond.”

Forty students —10 from each campus — set out to impress the judges, area professionals who volunteered at the event, with their handshake, conversation and confidence. The top eight students earned the opportunity to represent their schools as greeters at MCP’s annual Take A Stand fundraising event. 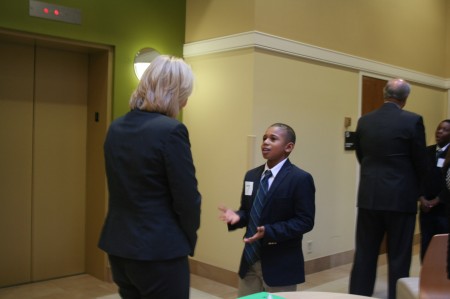 Montavion Pewitt, 11, engages one of The Great Handshake judges. (Photo by Jabril Faraj)

Tim Trzcinko, Lloyd Street Middle School dean of students, said the competition started with all of MCP’s approximately 800 middle-school students participating. While only 40 made it to the final leg of the challenge, Trzcinko said, the hope is that all students will benefit. “I think, ultimately, our goal is to have every one of our students have a mission either to [get to] college or a career that sets them up for success.”

The initial rounds paired students with judges in a “speed-dating” format, with contestants rotating every couple of minutes. The middle-school students attempted to win over as many of the judges as possible.

Jessica Trzcinko, Tim Trzcinko’s wife, served as a judge. An employee at Food Marketing Services, Jessica Tracinko said before the event that she was hoping to see improvement from 2013 when some students were noticeably nervous. “I hope to see that they can … calm themselves a little bit, so that they can just feel more at ease and have it be a very positive experience.”

Montavion Pewitt was one of the students who rose to the challenge. Appearing calm and confident, he seemed comfortable interacting with adults he didn’t know. But the 11-year-old dismissed the notion that he’s inherently good at talking to people. “Practice makes perfect,” he said.

Many of the students talked about being nervous but attempting to overcome their nerves. Kayla Bates, the eventual champion, said she composes herself by staying focused on where she wants to be in the future.

Jamecia Sanders, who is in her third year at MCP’s 38th Street campus, seemed dejected when she didn’t make the final four but said the experience was a good one nevertheless. “At least I made it this far,” she said.

Abby Andreitsch, executive director and co-founder of Schools That Can Milwaukee, stressed the importance of character education and the effect of events such as The Great Handshake.

After the event, Rauh praised the finalists as examples for other students. “They were great. All of them came across very positively and expressed themselves confidently.”

“It’s a dose of adrenaline, hope and belief,” said Andreitsch. “You can’t engage with these students without being really hopeful and excited about what’s possible for Milwaukee.”