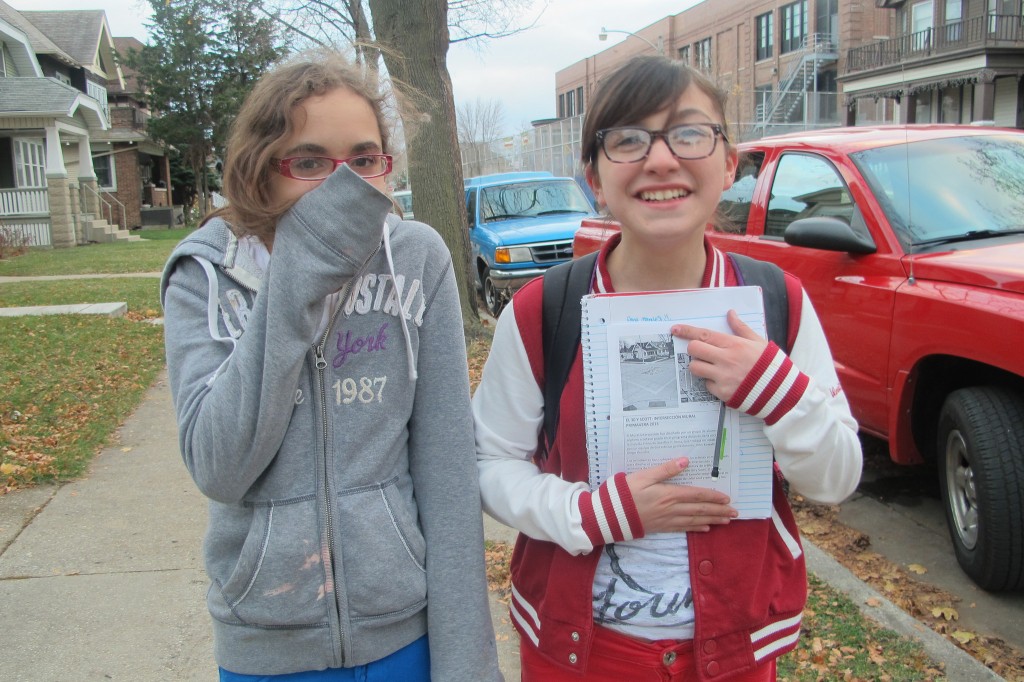 Yahaira Cruz, 12 (left) and Anna Morales, 13, went together to distribute fliers about their public art project.

“I think going door to door was a really great idea. We were letting them know (about) the project we are doing and getting their opinions,” said Diana Moreno, an eighth-grader working on the project.

The students are a part of a COA Youth and Family Centers program at Doerfler. Since September they have worked alongside professional artists John Kowalczyk and Diego Heredia, artists in residence at Artists Working in Education.

The artists have been working with the students on a mural that will be painted on the pavement at the intersection of 30th and Scott streets. Students are designing the 15-foot square mural and they hope community members will help maintain it. 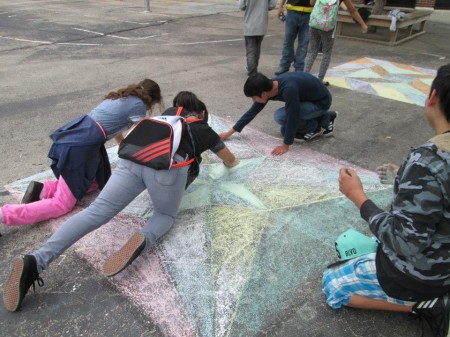 Doerfler students work on the design for a mural at the intersection of 30th and Scott. (Photo courtesy of A.W.E.)

“With 33 percent of the population under the age of 18, we are excited to see local youth collaborating on this public art installation that will build on our recent successful efforts to make Layton Boulevard West a destination for the arts,” said Dan Adams, neighborhood plan coordinator at Layton Boulevard West Neighbors, in a press release.

Juanita Valcarcel, site coordinator at the Doerfler Community Learning Center, praised the students’ involvement and engagement in the program. “They were able to do a project that otherwise they wouldn’t be introduced to. There were a lot of them who said, ‘I don’t know how to draw.’ The guys (artists) convinced them to try, and before you know it they had beautiful artwork,” Valcarcel said.

In addition to learning art concepts, the students also learned how difficult public art projects can be. There are multiple steps in the process from idea, to creation to implementation. Throughout the project, the students have fused art with civic engagement.

“There’s a sense of importance, pride and ownership in being able to do an art project together for the neighborhood they (students) live in,” said Ali Carlucci, program director of the school studio at Artists Working in Education.

“They understand the process of creating public art from design conception to the logistics of permitting through the Department of Public Works, what an alderman is, and the importance of buy-in from the neighbors, because public space affects and belongs to all of us,” Carlucci added.

Jon Anthony Cruz, a seventh grader, was excited about meeting the neighbors and said he understood how important their input is. “Going door to door was fun because we could interact with the neighbors and meet them personally. It (the project) would change their feelings about the neighborhood,” he said.

The students’ goal is to paint the mural in the spring.

“I liked when we were testing the art with chalk in the playground because we could see the visual of how it would look. It came out looking great,” Moreno said.