You are here: Home / Home / Carousel / Milwaukee police say officers who arrested reporter feared for their safety
Share this...

Squad cars are parked outside of the City of Milwaukee Police Administration building. (Photo by Brendan O’Brien)

Milwaukee police officers feared for their safety when a local reporter abruptly drove up next to their squad car and asked why they were in the area, just a week after two New York policemen were shot and killed in their squad car while on patrol, a spokesman for the Milwaukee Police Department said.

Jabril Faraj, at the time a freelance journalist, was subsequently arrested in the 2700 block of Auer Avenue at 3:30 p.m. on Dec. 27 and cited for “resisting or obstructing” a police officer and improperly parking a vehicle. Captain Gary Gacek, a spokesman for the department, said Faraj pulled up to officers in his vehicle, swore at them as he demanded to know why they were in the area and ignored officers’ orders to drive away.

Gacek was not at the scene when the incident occurred, but helped deploy police that day. He said he does not know why the officer didn’t respond to Faraj’s questions about what police were doing in the area. Gacek said if Faraj approached the officers without being confrontational and told them why he was in the area, the incident might have been avoided.

“It just wasn’t a very good situation and it could be handled a lot better by the defendant,” he said. “In hindsight, I’m sure the officers would probably have handled it a little bit differently, but at that time what’s going through their mind is ‘what if this guy is going to do something to us.’ ” 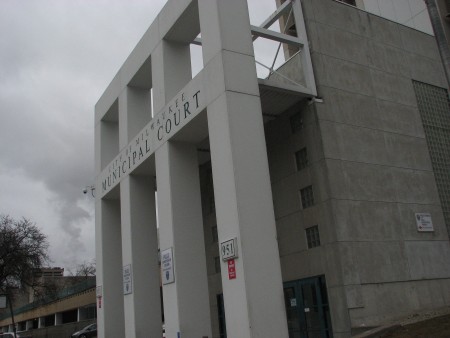 Faraj, who has since been hired by the Milwaukee Neighborhood News Service as a part-time reporter, said he went to the neighborhood as a journalist after hearing that there was going to be a protest.

“Apparently, this was supposed to be a community meeting and not a demonstration…I heard from someone that there won’t be any marching,” he said.

As he was leaving the neighborhood, Faraj said he became curious when he noticed several squads, an unmarked police car and a bus that he thought might be used to take a large number of people into custody. After driving slightly past a police squad parked near the corner of 27th Street and Auer Avenue, Faraj put his car in reverse, stopped, rolled down his window and asked an officer about the heavy police presence, he said.

The details of what happened next are in dispute. Gacek said Faraj swore at police officer Branko Stoj, demanding to know why there was a heavy police presence in the area, and then refused to move his vehicle after he was asked to do so several times.

Faraj said he was polite to Stoj when he pulled up to him and attempted to pull away quickly when the officer told him to move along. He said Stoj then ordered him to put his car in park.

“The officer jumped out of his car…opens my door up…and then essentially pulled me out of the car,” Faraj said. “I (was) being pulled out of my car and handcuffed for asking them a question.”

The lead-up to Faraj’s arrest began a day before when several people blocked traffic, danced on top of vehicles and played loud music during a protest, said Gacek during an interview on Jan. 13. Police were in the area the next day, on Dec. 27, after hearing another protest was planned, but believe it was cancelled because of their presence, he said.

“Police are concerned about protests every day that there is a protest,” Gacek said. “Our concern is to make sure that we are able to facilitate a lawful, peaceful exercise of people’s First Amendment rights.”

As officers searched his vehicle, he overheard police discuss whether he was “one of the three (they) were looking for,” Faraj said.

Police officer Joseph Anderer, who was involved in the arrest, told Faraj he was being arrested because he is a “domestic terrorist,” Faraj said.

Gacek said that he could not prove or disprove the interchange. “There is nothing along those lines that [has] been articulated in the citation and it’s not a question that I am going to be able ask the officer unless I give that officer due process rights,” Gacek said. “It’s a potential allegation of misconduct.”

Police at the scene did not tell him why he was being arrested, Faraj said.

“I had no idea at the time…I’ve had time to think about it and I believe that I was arrested because they did not want to answer the question that I asked,” he said. “There was no immediate suspicion. It wasn’t until the question was asked that there was a response.”

Faraj was taken to a police station where he was processed and asked about items such as a camera and a walkie talkie that police found in his car. Police insinuated that he stole the walkie talkie and interrogated him, Faraj said.

“I think they were trying to get to me. They accused me of stalking police … they asked me several times what I was doing and why I was in the area,” he said. “They asked me if I was trying to kill a cop, or had been conspiring to kill a cop … and asked if I had ever written anything supporting the killing of cops.”

During his time in police custody, police officers told Faraj that he was “lucky he didn’t get shot,” he said. He was fingerprinted, held in a cell for about an hour, issued a municipal citation and released, according to Faraj.

Because the original “resisting or obstructing a police officer” citation handed to Faraj was not complete due to words missing from a summary of the incident, Stoj had to reissue the citation, according to Gacek. He delivered an amended citation in person to Faraj’s home on Dec. 31 rather than mail it to avoid confusion, Gacek said.

Faraj said he felt threatened when a police officer came to his home to deliver a revised citation.

The narrative written on the back of each citation might shed light on the details, but the citations were unavailable as of this writing. Staff at the Milwaukee Police Department, Milwaukee Municipal Court and the Milwaukee City Attorney’s office either said they did not have access to the citations or did not know where they were.

If the city attorney’s office determines the citations have legal merit, they will be sent to municipal court where Faraj will be able to contest them, Gacek said. Faraj said he plans to fight the charges during his court date on Feb 13.

“It’s the police’s word against a civilian’s,” he said. “I will put my word up against anyone else’s.”