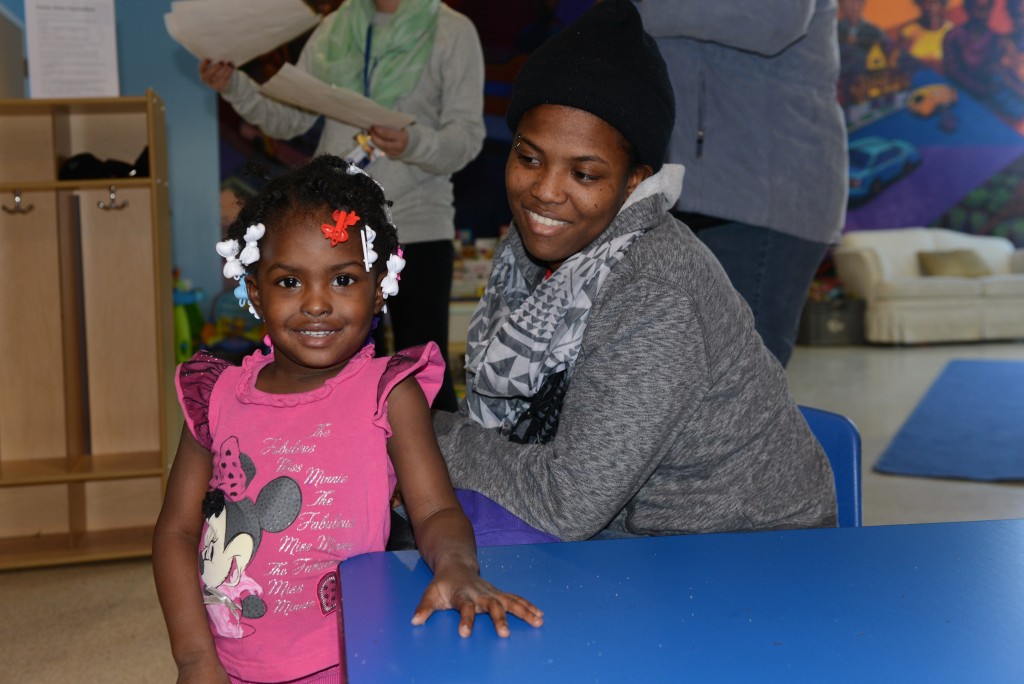 The Ford Family enjoying their time at ‘drop-in’ at The Gill Family Resource Center at the Goldin Center. (Photo by Sue Vliet)

Resident involvement and collaboration between local organizations and government agencies has caused a dramatic drop in crime in the Amani neighborhood during the last two years, according to the COA Youth & Family Centers, an organization in the heart of the inner city neighborhood.

Amani, a neighborhood from 20th to 27th streets and from Center Street to Keefe Avenue, had a 32 percent decline in crime since 2013, a much steeper decrease than the 10 percent decrease for the entire city of Milwaukee, data gathered by COA showed.

“This drop in crime didn’t happen by accident. It involved a comprehensive community effort. Residents got involved and the neighborhood developed a sense of empowerment,” said Tom Schneider, executive director of COA, which runs the Goldin Center, 2320 W. Burleigh St., within the Amani neighborhood. 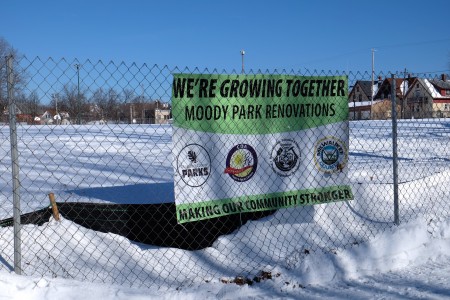 A sign hangs on a fence advertising the planned renovations at Moody Park. (Photo by Sue Vliet)

Schneider credited several initiatives at the Goldin Center with contributing to a safer neighborhood, including expansion of youth and family programs and a new family clinic created by Children’s Hospital of Wisconsin and Marquette College of Nursing.

The opening of the Ethel Gill Family Resource Center by the Doris Duke Charitable Foundation at the Goldin Center has also brought the community together with various programs and classes geared toward family and parenting, Schneider said.

“What we learned was that it takes a comprehensive effort to make significant change,” Schneider said.

“We want people to engage in what is really happening in their community … we are doing a very good job at sustaining the neighborhood together,” said Arlene Patterson, president of the Amani United Neighborhood Association. “The association’s goal is to make people aware and get them out and involved and let them know that they mean something to their community.”

Amani saw assaults and burglaries slashed by more than a fourth, thefts cut in half and sex offenses down by a quarter, according to data from the city. The number of homicides, however, has remained steady with three or four annually in the neighborhood during the last three years, a statistic that frustrates neighborhood leaders including Patterson, whose son was killed by gunfire in 2006.

“The ‘no snitch, don’t tell’ (mentality) has screwed up Milwaukee…that’s why we have so much gun violence,” she said. “These guns are so plentiful and it’s terrible.”

Patterson said although there is a lot of work to be done to combat gun violence, she credits the Milwaukee Police Department with being a strong partner in the fight against crime in Amani.

“The department is having a really great impact on the neighborhood,” she said.

Neighborhood leaders look forward to a new Calvin Moody Park, which was once an eyesore and crime hub in the heart of Amani. Residents have worked with the Milwaukee County Parks Department on the $2 million park renovation project that includes a 3,000-square-foot community center, walking paths, lit basketball courts and a splash pad. The park is expected to be complete next fall.

“When residents know their voice counts, good things can happen. The Amani voice is just warming up,” said Sister Patricia Rogers, executive director of the Dominican Center for Women.