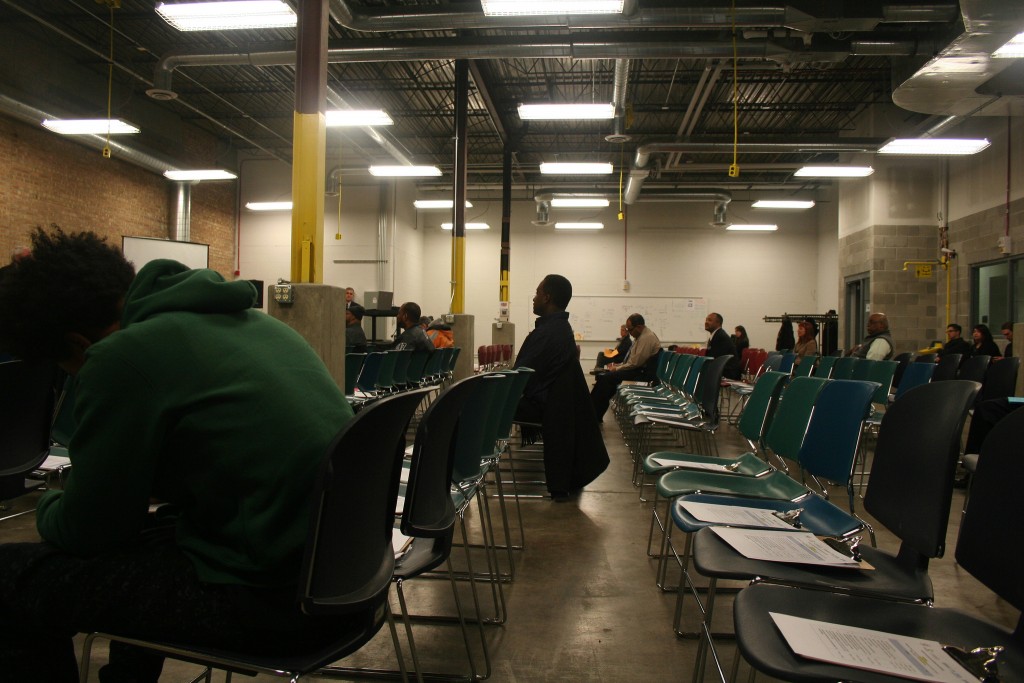 Jared Iles, a Salvation Army Emergency Lodge resident, has been on a quest for employment since August of last year.

But all the 44-year-old ex-offender, who was convicted of a felony in 2013, has to show for his eager attitude is a stack of business cards from temp services throughout Milwaukee that have not yielded any work.

It would seem Iles has the ideal pedigree for Compete Milwaukee, a City of Milwaukee transitional jobs program, but he is childless, making him ineligible.

“There ain’t nothing I can do about it. I’m just trying to find work,” he said during a recent informational meeting about the program, where he learned he does not meet the requirements.

The Compete Milwaukee program hopes to fill 115 temporary job openings that pay $10.10 an hour within the city’s public works and neighborhood services departments as well as the Port of Milwaukee. 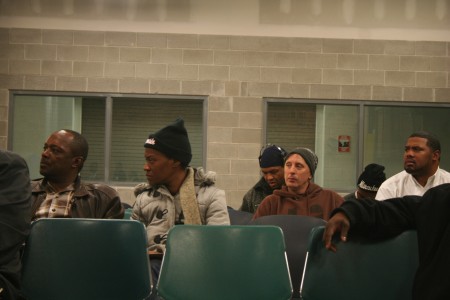 Johnny Sims (right) and others look on as local officials address the crowd of potential participants. (Photo by Jabril Faraj)

Iles was not alone at the information session on Feb. 11 at a MATC facility at 816 W. National Ave. More than half of the 80 job-seekers who attended did not meet the requirements of the program which include living within a specific geographic area, caring for at least one child and having a child support order, welfare reunification plan or status as an ex-offender. Program participants must have been unemployed for at least four consecutive calendar weeks, not having worked more than 16 hours in any week since.

Prior to the Feb. 11 sessions, about 60 of the 115 positions were still available. Ernesto Baca, a contract manager at United Migrant Opportunity Services (UMOS), said information sessions last month drew about 250 people.

During the evening session, Alderman Ashanti Hamilton said that if programs like this don’t provide opportunities people can take advantage of then they can’t be considered a success.“If you relaxed those requirements, a whole lot more people would be able to qualify for the program — you would be able to allocate the resources a whole lot easier and you would have a greater impact,” he said after the session.

The program is a collaboration among the City of Milwaukee, the Wisconsin Department of Children and Families (DCF), UMOS and the Milwaukee Area Workforce Investment Board (MAWIB).

It is “focusing on individuals who live in areas where there’s high unemployment” to “create positive momentum in their lives” and act “as a springboard,” Mayor Tom Barrett said after the session.

•Must reside in this geographical area at the time of enrollment: Sherman Boulevard on the West, Silver Spring Drive on the North, Hwy I-43 on the East, and Mitchell Street on the South.

•If 24 years of age or older, MUST be the biological, adoptive or primary relative caregiver of a child under the age of 18.

•Individual must have one of the following: a child support order, a child welfare reunification plan or be an ex-offender.

•Must have been unemployed for the last four (4) consecutive calendar weeks prior to enrollment.

•Cannot be receiving W2 benefits and not eligible to receive Unemployment Insurance Compensation.

•Have an annual household income that is less than 150% of the federal poverty guideline for the household size.

According to DCF, the process for determining requirements starts at the federal level. However, neither Wisconsin state statutes governing the Transform Milwaukee Jobs program or Social Security Administration standards governing federal Temporary Assistance for Needy Families (TANF) funding mandate the need for a child support order, welfare reunification plan or status as an ex-offender.

“The goal was to use the allocated funds to have the most impact by targeting parents who had the highest barriers to employment,” DCF spokesman Joe Scialfa said in a statement.

The program will cost $2.1 million in 2015 and will be paid for through tax-levy financing, a Community Development Block Grant and a TANF grant.

Another program-requirement casualty is Shaniqua Stampley, a 24-year-old single mother who said she makes about $645 a month working part-time caring for her grandmother. Stampley said she works about three hours a day.

“It’s hard finding a job,” said Stampley, who attended the earlier information session. “I really thought that I had an opportunity, here … and then I started hearing the qualifications.”

Calvin Skenandore, 40, has primarily worked temporary jobs for the last 15 years. But Skenandore, who is an ex-offender, said he needs something more stable to support his girlfriend and her three children, who he views as his own. In the mean time, though, he needs the “money in his pocket.”

“I get up early in the mornings, I go look for work, then I go to work,” Skenandore said. “I don’t have a real job. And, what I need is a real job with real income.”

Leslie Silletti, a City of Milwaukee policy resource coordinator and director of Compete Milwaukee, addressed the possibility of not filling all 115 placements.

“I think we’re going to need to re-group with UMOS and [MAWIB],” she said, mentioning the potential for ongoing recruitment or another general recruitment session. But she dismissed the possibility of using different criteria.

“No, unfortunately not,” Silletti said. “We’re locked in, at least for this year.”

For those who qualified, though, the program could be the foot in the door they’ve been looking for. Johnny Sims was one of those people. The 35-year-old Sims has a child support order and has been unemployed for almost six months.