You are here: Home / Home / Carousel / Next phase of Menomonee Valley development to include riverwalk, food and beverage district
Share this... 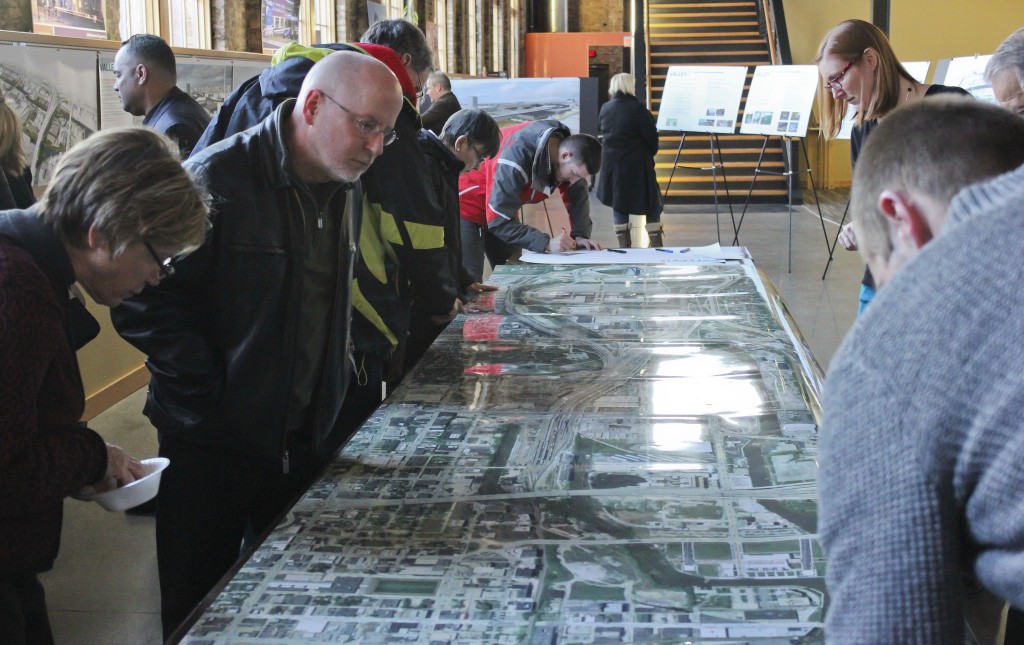 Visitors pore over an aerial map at an open house to preview development of the Menomonee Valley, held at the Zimmerman Architectural Studios. (Photo by Alhaji Camara)

Draped across a table in the center of a room at Zimmerman Architectural Studios, 2122 W. Mount Vernon Ave., was a huge aerial view map of the Menomonee Valley. Evidence of the development that has occurred since the original plan for the valley was unveiled in 1998 was everywhere, including a new park, soccer fields, businesses and bridges connecting Silver City and Clarke Square to the valley.

But there are still 100 acres of undeveloped land in the valley, according to Corey Zetts, executive director of Menomonee Valley Partners (MVP). MVP is collaborating with the City of Milwaukee, Wisconsin Department of Natural Resources and numerous nonprofits and businesses to craft a development plan for the next 10 years.

Menomonee 2.0, the blueprint for development of the 100 acres, includes a new riverwalk along the Menomonee, establishment of a food and beverage district, and a tilting of development priorities to the center and eastern portions of the valley.

The plan is to develop the food and beverage district in the eastern section of the valley along Bruce and Pierce streets, which are connected to the South Side. 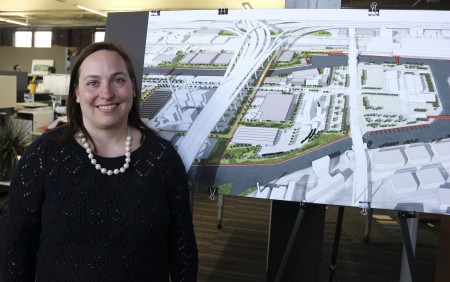 Corey Zetts, executive director of Menomonee Valley Partners, said 300 acres of land, including 60 acres of parks and trails, have already been redeveloped in the valley.

According to Zetts, the establishment by MATC and FaB Wisconsin of the Food Maker School and Center of Excellence at 8th Street and National Avenue, near the Bruce and Pierce industrial zone, could help attract food and beverage manufacturers to the area.

“Those companies can also draw workers from the near South Side,” Zetts said.

First though, the area must be rezoned as industrial only. Currently, it is zoned for industrial, educational and residential use, according to Vanessa Koster, planning manager at the City of Milwaukee Department of City Development.

“We need a buffer to keep that area manufacturing focused,” Koster said.

The other target area for the food and beverage district is the valley’s central portion, closer to Potawatomi Casino and Palermo’s Pizza. The idea for that area is to create a hub of companies similar to Palermo’s, which offers retail and café space in addition to production facilities. Zetts said the area where the Lakefront Brewery is located is a nearby example.

“It seems like the perfect place to build residences,” said Bielinski, who said, overall, he was impressed with the plan for the area.

There had been previous talks of redeveloping vacant buildings along St. Paul Street into condominiums, but business leaders in the area voiced strong resistance, Koster said. 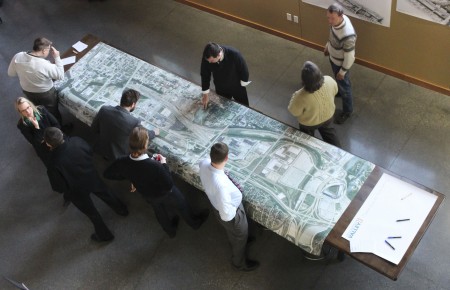 There’s no word yet on what will become of the property that formerly housed the Cargill beef slaughterhouse, which closed in July, but the 2.0 plan recommends that the land be used for light industry.

Improved access to the valley is also a key aspect of the new plan, including better pedestrian access from the 6th Street Viaduct and a pedestrian bridge connecting the Harley Davidson Museum to the valley.

A large part of the valley’s rejuvenation during the past decade was creation of the newest Urban Ecology Center and Three Bridges Park, and expansion of the Hank Aaron State Trail into the valley, among other projects that helped the area become a haven for urbanites. Those developments were funded by the $26 million “From the Ground Up” project, which resulted in the area becoming a hub for nature enthusiasts and others looking for an escape from the city.

The plan to add a riverwalk along the Menomonee to those amenities excited Diane Wais, who lives in the North Shore. She’s part of a hiking group, and one of the members’ favorite places to traverse is the section of the Hank Aaron State Trail that runs through the valley.

“I’m not into industry, but I’m into more green space to hike on,” said a smiling Wais.

Wais added that she is looking forward to seeing the grand plans for the valley come to fruition.

“It’s all doable,” said environmental engineer Bob Peschel, a consultant for the plan. Peschel said the entertainment amenities, as well as industries targeted for the valley, make sense for the land.

And while Zetts acknowledged that all the plans may not come to fruition, recent history in the area makes it a good bet that most of them will.

“We’re building on the momentum,” Zetts said. “There’s a lot of people committed to making the valley even better.”