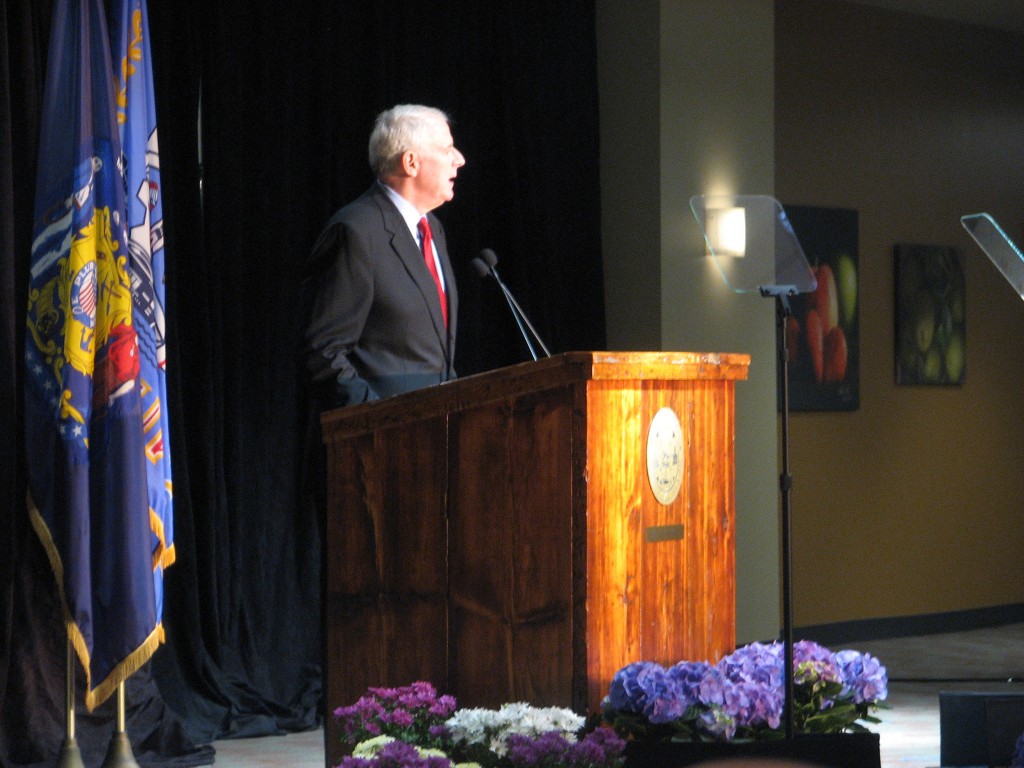 Mayor Tom Barrett gives his state of the city speech in front of a packed house at Alverno College. (Photo by Brendan O’Brien)

Neighborhood leaders throughout Milwaukee praised Mayor Tom Barrett for his optimism and his focus on the need for the city to continue to partner with local organizations during his state of the city speech.

The mayor repeatedly told a crowd of 700 residents, community leaders and city officials at Alverno College that the City of Milwaukee must collaborate and cooperate with neighborhood groups and organizations to solve the city’s most pressing problems.

“That’s very encouraging…I think there is an effort on his part to change the culture within city government to be less insular and to be more effective in working with partners,” said Leo Ries, executive director of LISC Milwaukee.

During his 30-minute speech, Barrett highlighted several neighborhood initiatives, including the city’s sale of a six-unit property to Journey House to rehabilitate and house youth who have aged out of foster care and an effort by Pulaski Park residents to reconnect the Kinnickinnic River corridor with their neighborhood with the help of city officials. 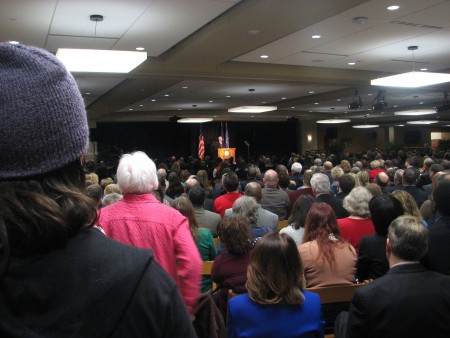 “We are fortunate to have so many dedicated partners who believe in Milwaukee and in building strong, safe and healthy neighborhoods,” he said.

Barrett also focused on his Strong Neighborhoods Plan, intended to address the foreclosure problem and improve the housing stock throughout the city by “taking a hard line on zombie foreclosures, nuisance properties and scofflaw owners.”

The mayor said the initiative has already paid dividends after the city earmarked $24 million for it in the 2014 and 2015 budgets. Through the program, the city sold 437 properties, surpassing its 2014 goal of 350 houses and adding almost $19 million to the tax rolls, the mayor touted.

“We are not letting up,” he said. “We are pushing back on this problem together and will continue turning neighborhood eyesores into neighborhood assets.”

The mayor’s neighborhoods plan caught the attention of Ian Bautista, executive director of the Clarke Square Neighborhood Initiative. Bautista said that while he is encouraged by the prospect of strengthening neighborhoods through housing stock improvements, it remains to be seen what role his organization and others like it will play in facilitating the plan over the long term.

“Having a mayor who makes that commitment is heartening,” he said.

During the speech, Barrett also highlighted the creation of a Milwaukee Police Department program in which 17 young adults will work part-time, year-long jobs as ambassadors. The intention of the program is to give young adults experience in the law enforcement field, the mayor said.

“Any time you get young people to serve and invest in the community, they are more likely to do well,” said Al Hegwood, a community organizer with Safe & Sound, a crime prevention organization.

Several neighborhood leaders spoke highly of the mayor’s commitment to creating the next generation of workers through Earn & Learn, the city’s youth workforce preparedness program. “I thought that was fantastic,” said Margo McGee, a staff member at Walnut Way.

McGee said she also appreciated the tough tone the mayor took when describing the looming state cuts to the Milwaukee Public Schools.

“Inner city kids can’t succeed if you keep taking things away from them,” she said.

The mayor did not shy away from discussing the city’s streetcar project and the financing for a new Bucks arena, two controversial issues that some say pit the needs of the downtown against the needs of the neighborhoods.

“That’s where the tension tends to bubble up, but he was very in tune to both,” Ries said. “He is trying to manage some of those tensions in a reasonable and balanced way.”

Neighborhood leaders said that the approach the mayor and his administration take when working with the community is vital to the success of his agenda.

“If they are willing to listen…that’s hugely important,” Bautista said. “They are not coming to the table, proclaiming to have all of the answers…they are working with us to be responsive to what our neighborhoods are trying to achieve.”