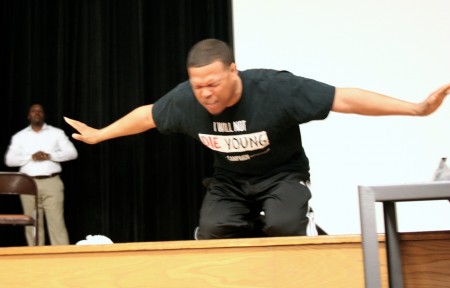 Muhibb Dyer kneels on stage at the Washington Park Senior Center during the Unite Milwaukee Anti-Violence Summit, arms spread, pain in his eyes. He speaks in spoken-word about the death of his godson Preston Blackmer, a 16-year-old black male, who was killed in Milwaukee in 2005.

Amid addresses by city officials including Mayor Tom Barrett and state Sen. Nikiya Harris Dodd, who organized the summit, Dyer and Nixon set the tone for the day-long summit, which included presentations from neighborhood groups, community and faith leaders as well as law enforcement and city officials. Organizations including the 30th Street Industrial Corridor Corporation, Running Rebels, Moms Demand Action for Gun Sense in America and the Bureau of Alcohol, Tobacco and Firearms (ATF) manned resource booths throughout the event.

After Dyer’s rousing spoken-word performance, which received a standing ovation from the crowd of about 75, Nixon called a group of young African-American men who are members of BM2 onto the stage. BM2 seeks to “[cultivate] an open environment of creative talent, coupled with ongoing business development training,” according to its website. Dyer led the teenagers in a call-and-response chant affirming their worth and purpose. The young men repeated: “I. Will. Not. Die. Young.”

[soundcloud url=”https://api.soundcloud.com/tracks/196749853″ params=”auto_play=false&hide_related=false&show_comments=true&show_user=true&show_reposts=false&visual=true” width=”100%” height=”300″ iframe=”true” /]
Elijah Shabazz, 17, has been involved with BM2 for about two years. He said the program allows young men to keep each other accountable.

“We all understand each other and we all respect each other,” Shabazz said. “It’s a brotherhood — we treat each other like brothers.”

Lealyn Larry, another young man in BM2, said the program and the relationships he’s formed through it have helped him realize how important community and support are.

“When we all first met each other, we tried to one-up each other,” he said. “At the end of the day we all recognized … that we all need to come together.” 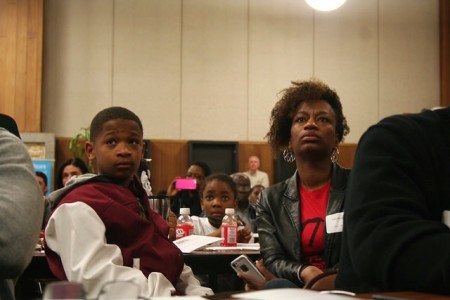 Barrett’s message focused on the high amount of violence in the first two months of 2015, compared with what Milwaukee has typically seen. It’s not just gun violence that has been an issue, he said, citing a recent incident in which two people were killed when an 18-year-old in a stolen car ran a traffic light. Using that incident as an example, Barrett said it’s important to inform people so they can be prepared. He said the young man had “probably stolen 30 cars,” many while they were running.

“People can take steps that can, I think, help insulate them from violence, which is something we want to see happen,” he said.

Dyer disagrees with the idea that people should only protect themselves. Though he understands the need for people to feel safe, he said they can’t lose their humanity in the process.

Instead, he said the way to address violence is through prevention — by people caring as much about others’ safety as their own.

Violence isn’t black and white, Nixon explained. “The conditions create the people and the people relay the conditions,” he said. “I can give you a hundred young men who are one foot in and one foot out and I’m [an] example — I could’ve went either way.

“Luckily, I was able to get out but, then, you’ve got a hundred more that, if you come through and show them a way, they might get away. But if nobody comes through, then what happens?”

Participants agreed that the only way forward is to have the tough conversations while being honest with each other and accepting responsibility instead of pointing fingers.

“There’s no secret — we have issues here in the city,” said District 7 Police Captain Jutiki Jackson. “I want to know about them, figure out solutions and then start to work toward those solutions.”

Harris Dodd said she hopes that the event, which she plans to hold yearly, will be the beginning of that conversation.

“We should start to see this summit build, with this community, a blueprint that holds everybody accountable because, right now, that’s what we are lacking,” she said, calling for an end to “policing tactics that are targeting certain communities unfairly.”