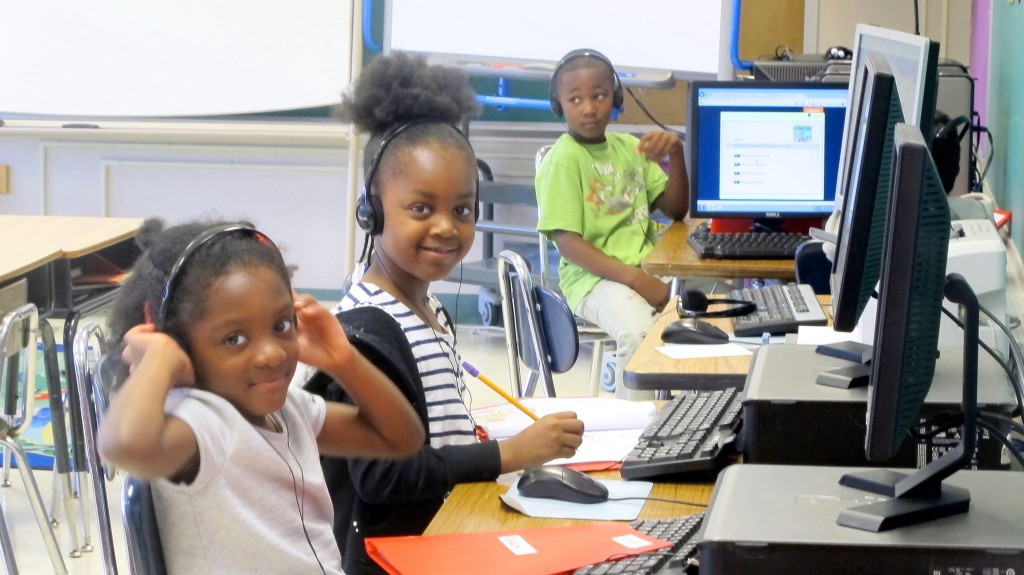 Students at Thurston Woods, which is one of 14 underperforming MPS schools participating in the Commitment Schools program, work on assignments. (Photo by Molly Rippinger)

Results from Measures of Academic Success (MAP) testing administered in the fall and winter indicate that the majority of K-8 Commitment Schools are closing the achievement gap in both mathematics and reading.

“Overall, we are moving in the right direction,” said Dr. Darienne Driver, superintendent of MPS.

Achievement gaps are based on MAP testing and measure the disparity between students’ scores and the scores needed to be considered proficient. 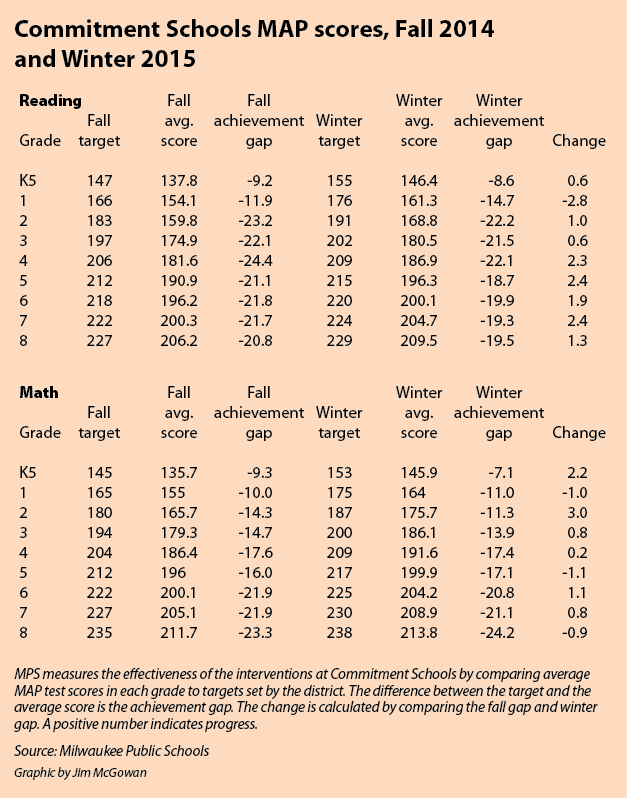 “This means that the [Commitment School] students are growing faster than average,” said Dr. Melanie Stewart, director of assessment at MPS. Administrators are confident that the gains will continue in the final round of MAP testing, which is administered in May.

MPS expected that Commitment Schools would reduce the achievement gap by 5 percent following the first year of academic and behavioral interventions.

“This is our first look at the progress we are making in our Commitment Schools,” said Driver in a news release. “We are pleased to see that outcomes for students are improving.”

The program provided $300,000 in federal funds to each school to be allocated in $100,000 increments over a three-year period. Commitment Schools have used the funds to increase professional development, implement improvement systems, upgrade technology and hire additional staff.

Ruth Maegli, chief innovation officer at MPS, explained that each Commitment School adopted interventions that address its specific needs. “Everybody chose something different because their population and their staff needed support in different areas,” said Maegli.

“I’m really excited about the progress our students have made and the hard work our teachers have put forward to make sure that our students are learning,” said Keona Jones, principal of Thurston Woods.

At Thurston Woods, six of the nine grade levels are closing the achievement gap in both math and reading scores.

“This is working for us,” said Jones. “We think that the building intervention program was key for having these kind of outcomes.” Jones and her staff have found the supplemental lessons to be an effective catalyst for improvement. 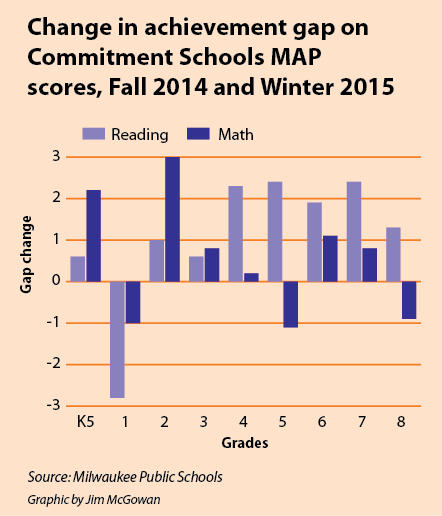 All Thurston Woods students work with Edmond and Peterson four times each week in 15-minute increments, twice in reading and twice in math. “Students can be resistant to being pulled out of class, but we’re working with both the high-achieving students and students who need improvement — it’s an equalizer,” explained Jones.

The one-on-one approach has helped teachers at Thurston Woods create individualized MAP testing goals for their students. The data are also used to implement Response to Intervention (RtI), a framework used throughout MPS to monitor student progress through a tiered system of evaluation and action.

Another portion of the behavioral intervention strategy for Thurston Woods was to implement RtI at the beginning of September using the student testing data from the previous spring. Other MPS schools waited until the first round of MAP testing at the end of October.

Thurston Woods accelerated RtI by identifying 85 students at the beginning of September whose spring test scores indicated that they needed interventions to become proficient. After the first MAP assessment, 40 students showed enough improvement to no longer require additional support. Another 140 students began RtI in November and 45 students were dismissed after the second round of MAP testing.

“It was so nice that when we should’ve been just starting RtI we were already exiting students that didn’t need further interventions,” said Jones.

Thurston Woods was one of 48 MPS schools that “failed to meet expectations” set by the Wisconsin Department of Public Instruction (DPI) last year. All of the underperforming schools were encouraged to apply for the Commitment Schools program by submitting a formal proposal that detailed what resources would be added and systems implemented to improve academic achievement. MPS has not calculated achievement gaps for the other 34 underperforming schools.

The K-8 Commitment Schools are outpacing the growth being tracked district wide. “This is a very good thing,” said Tony Tagliavia, media manager at MPS. “These schools need to grow faster in order to get kids on track.”

MPS is hoping interventions made at the secondary education Commitment Schools will result in a 10 percent increase in high school students meeting requirements for the ACT, a standards- and curriculum-based test used to assess students’ readiness for college. Data will not be available until after testing is administered in the spring.

“We’re really just at the beginning,” stressed Maegli. “You have to remember this is a three-year program.”

As of now, Maegli explained that there are no concrete plans to expand the Commitment Schools program to include any other MPS schools that failed to meet expectations in 2013-2014. Yet, Maegli said that the thought of replication is always on the minds of MPS administrators.

Jones said she is already planning for the end of the Commitment Schools grant and is looking for ways to continue funding the building intervention teacher within the existing school budget.

“It has made such a difference to have a person working in a small, group setting with the students,” said Jones. “I’m already thinking about how we’ll maintain a similar system at the end of the three years.”