You are here: Home / Home / Carousel / Mothers of violence victims plan to march in D.C. to demand justice
Share this... 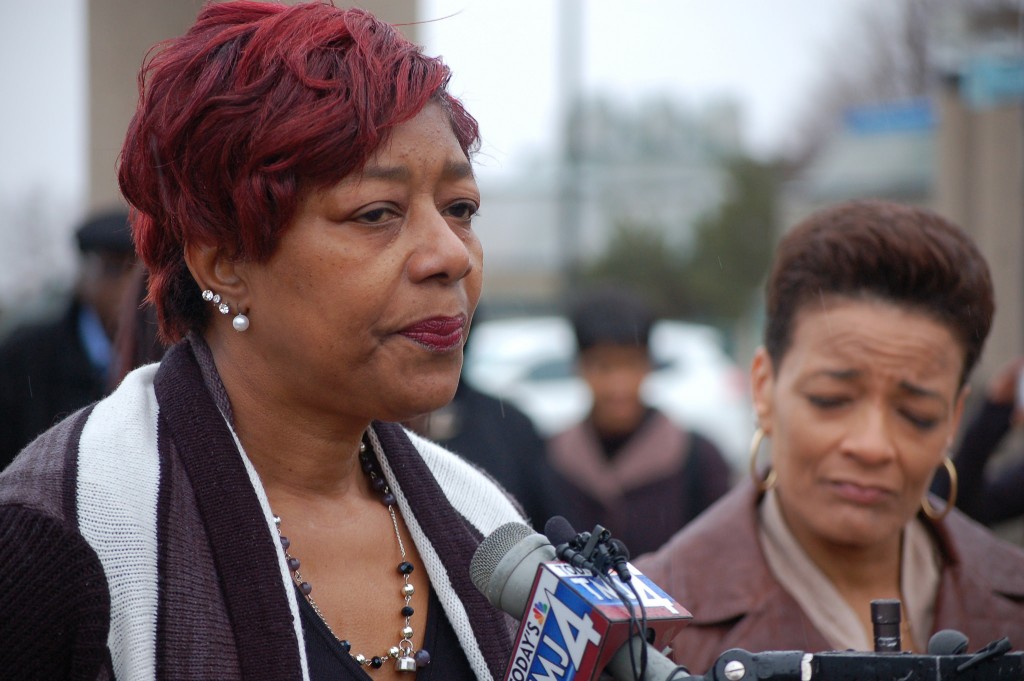 Maria Hamilton (left), mother of Dontre Hamilton, stands alongside Alicia Stingley, mother of Corey Stingley, as they announce plans for a Million Moms March for Justice in Washington, D.C., on Mother’s Day. (Photo by Edgar Mendez)

Just before Maria Hamilton, mother of Dontre Hamilton, announced that she and Mothers for Justice United are planning a Million Moms March in Washington, D.C. on Mother’s Day, raindrops began to fall.

The rain fell softly, then harder, before Hamilton’s tears began to fall as well.

“We’ve shed so many,” she said, referring to herself and the mothers of Brandon Johnson, Corey Stingley and Tony Robinson. They’ll be marching in D.C., hoping to compel the Justice Department to appoint a special prosecutor to investigate deaths of those killed by law enforcement officials or “racist vigilantes.”

Mothers for Justice United, the group planning the march, is a support network for mothers whose unarmed black children have been killed by police officers or white vigilantes, according to a statement from organizers. 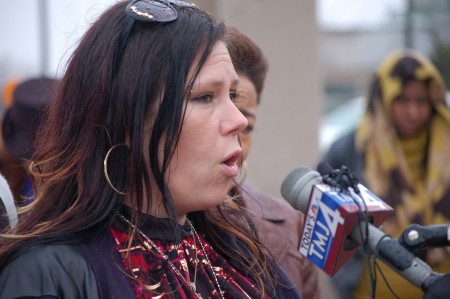 Andrea Irwin’s son, Tony Robinson, was shot by police. His death is under investigation by the Wisconsin Department of Justice. (Photo by Edgar Mendez)

Hamilton’s son, Dontre, was unarmed when then-Milwaukee Police Department officer Christopher Manney shot him 14 times, killing him at Red Arrow Park last April. Hamilton was schizophrenic, according to his mother.

The Milwaukee County District Attorney’s Office ruled Hamilton’s shooting as justified though a Fire and Police Commission panel found that Manney had not followed proper MPD procedures in the case and banned him from the force.

Were Dontre white, his mother said, he likely would not have been bothered while sleeping on a bench at Red Arrow Park. “College students lie around downtown and take naps all the time,” she added.

Still, she said, the march is not about protecting just black lives but all lives.

Organizers hope to gather a million moms from around the nation, leading them from Mount Vernon to the steps of the U.S. Justice Department. where they will present their demands. Hamilton said she’s been communicating with social justice organizations around the country as well as more than 100 mothers whose stories are similar to hers.

One of them is Andrea Irwin, whose son, Tony Robinson, was shot and killed by Madison police in early March. She said she hopes the district attorney will look deeply into her son’s case, which is currently under investigation.

“All I can do is pray,” she said through tears.

Corey Stingley died in 2012 after being restrained by three customers at a West Allis convenience store. Brandon Johnson died at the Milwaukee County Mental Health Complex in 2012 after days of inaction by health care workers whom he’d told that he was paralyzed.

Hamilton said leaders in Washington have turned a blind eye to a broken system of justice. She said she hopes that changes after the march, adding, “We’re putting people in Washington on high alert that we’re not going to stand for the murder of any more of our children.”