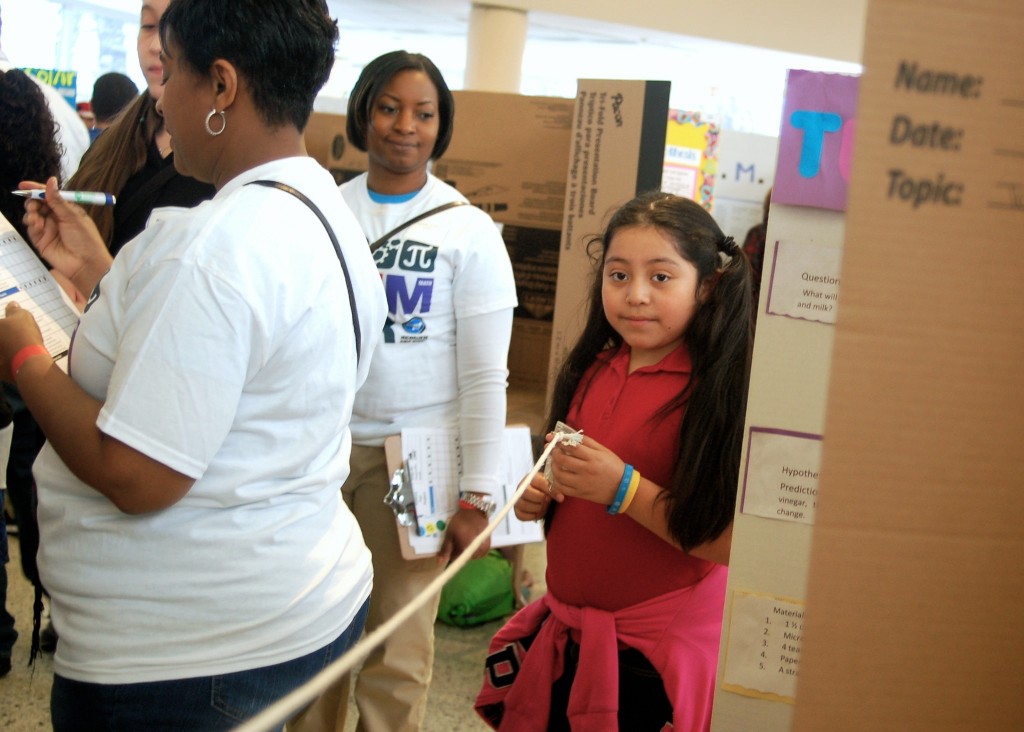 Sancha’s project was one of more than 200 at the fair and focused on creating simple machines to help perform tasks. “My favorite part of the project was testing it,” said Sancha as she demonstrated how a pulley system helped pull a small model car up a ramp.

Like so many of the students at the fair, Sancha’s experience with the project has been an opportunity to foster an early interest in science, technology, engineering and math (STEM). After her demonstration, Sancha said that she hopes to become a doctor or an engineer when she grows up. 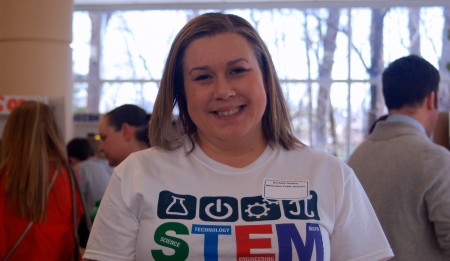 This was the first year that MPS specifically highlighted STEM at the science fair. Rochelle Sandrin, science curriculum specialist at MPS, explained, “This is a nationwide trend. We don’t have enough students graduating from college to fill our STEM careers.”

In 2010, President Barack Obama launched “Change the Equation,” an initiative focused on improving STEM education in the U.S. The program combines the efforts of more than 100 CEOs from major corporations, such as Glenn Britt of Time Warner Cable and Ursula Burns of Xerox, to implement STEM programs in schools throughout the country.

“Our success as a nation depends on strengthening America’s role as the world’s engine of discovery and innovation,” said Obama.

A 2011 report released by Georgetown University’s Center on Education and the Workforce predicts that by 2018, STEM occupations will account for 8.6 million jobs in the U.S. economy, which is a 1.3 million increase from 2008.

The report also anticipates that the Wisconsin workforce will experience a 12 percent increase in STEM jobs by 2018, with 43 percent of the positions being in computer occupations.

MPS is one of more than 70 school districts in the state to adopt the Next Generation Science Standards, an approach to K-12 science education emphasizing STEM through integration of content and practice.

Sandrin explained that the new standards require teachers to incorporate the engineering process into their science curriculum. “Science doesn’t stand alone,” said Sandrin, who oversees the progression of K-12 science courses throughout the district. “You can’t have science without math, without reading, without problem solving or without engineering.”

The STEM science fair encouraged students to develop projects that incorporate numerous facets of STEM. Some showcased advanced STEM approaches, such as one high school group that created a hand prosthesis from recycled materials.

Participation in the STEM fair was not mandatory. “If you do you this, it’s something you really want to do,” explained Sandrin. She explained that younger grades work on projects as a class, but for the engineering projects older students are encouraged to work in a team of up to five.

With the engineering and design projects, students are required to collect data, make adjustments and collect new data. “They really go through a process similar to what engineers experience,” said Sandrin.

Through the program, teachers and counselors can receive training while students have access to diverse courses, including aerospace engineering, civil engineering and architecture, principles of biomedical sciences, and automation and robotics. MPS reports that 46 percent of students in Project Lead the Way are female.

Antonio Rodriguez, STEM curriculum specialist of Career and Technical Education at MPS, explained that U.S. culture tends to perpetuate the idea that women should not be interested in the STEM fields. “The first thing a lot of little girls get is a Barbie doll or kitchenette and a guy gets the Erector set,” said Rodriguez.

Many girls at the science fair were changing the perception that only boys can be interested in STEM. Payeng Mou, a 10th grader at Samuel Morse-John Marshall High School, worked on a project that focused on the process of starch retrogradation, the reaction of molecules within bread reforming and hardening.

The students conducted various experiments, flushing bags of bread with gases such as argon and nitrogen, and conducting compression tests to measure the softness of the slices. Argon was found to be the best preventer of starch retrogradation, keeping the bread moist for the longest period. Mou said she hopes to major in chemistry when she attends college.

“We’re really trying to work with students at a younger age to help them see the possibilities,” said Sandrin. “Sometimes when people think of a science or a math career they think of very specific things like being a doctor or being an accountant, but there are a lot of science, math, engineering and technology careers that go beyond that.”

Thomas Baker, AP chemistry teacher at Morse-Marshall, has found that a hands-on approach fosters a greater interest in STEM from his students. Baker was instrumental in implementing an aquaponics system for his classroom, which fuses aquaculture (farming of aquatic organisms such as fish) with hydroponics (growing plants in water). “The science that they learn from the [aquaponics] system seems to be more relevant to them and they are able to understand that science better, even though it was technically the same science as before,” said Baker.

Kris Strand, a retired special education and science teacher at Washington High School, was one of the volunteers judging projects. She is a supporter of the STEM approach. “If the students read something in a book and study for a test, it’s not going to make as much sense to them,” Strand said. “If they have to portray it and come up with a project, it sticks with them a lot longer.”