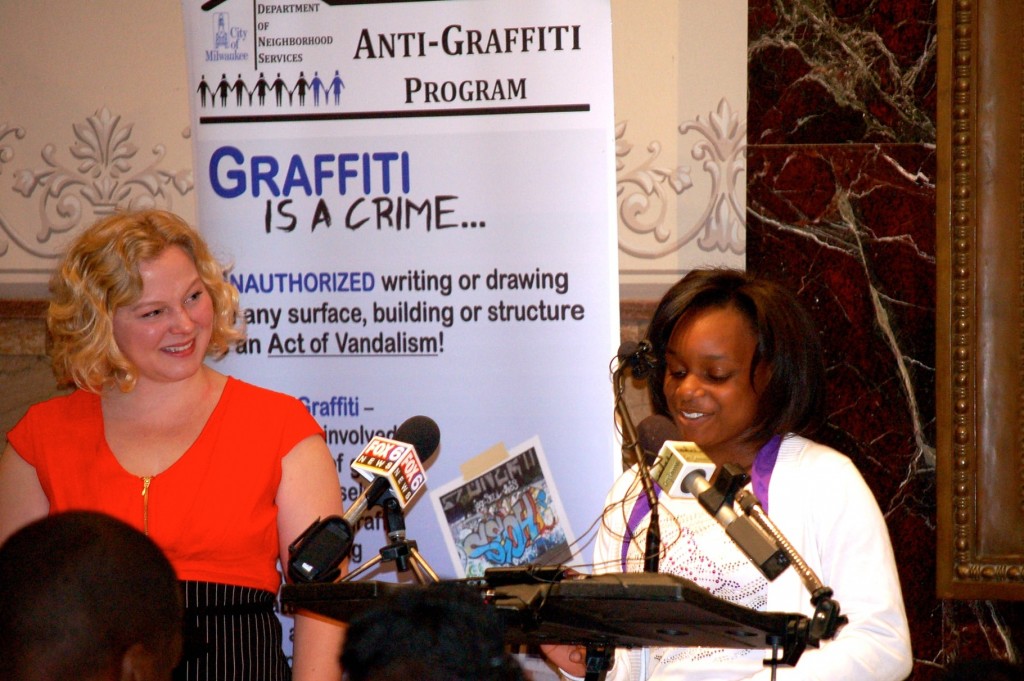 Aldaya McKinney (right), president of the Westside Academy II youth council, addressed a gathering at City Hall as Caitlin Sprague of Safe and Sound looks on. (Photo by Allison Dikanovic)

Aldaya McKinney, a 7th-grade student at Westside Academy II and president of the youth council, boldly approached the podium in the rotunda of City Hall. She looked straight ahead, flashed a smile, and spoke her message loud and clear, “There is more in our community than just violence, drugs and being in gangs.”

McKinney was honored alongside her youth council peers for their work to improve the image of their Washington Park neighborhood.

“The way people view us is mostly negative, and we want to be seen more positively,” McKinney said.

Since October, the Westside Academy II youth council has been working to improve public safety by improving the neighborhood’s appearance. The council is facilitated by Safe and Sound and is the youth component of the 27th Street West Drug Free Coalition. 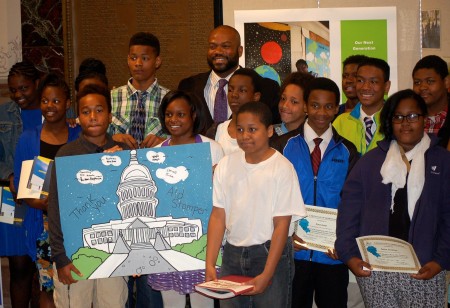 The members of the Westside Academy II youth council show off the certificates of appreciation they received and a painting they presented to Alderman Russell Stamper. (Photo by Allison Dikanovic)

The group of 10 students identified drug dealing outside of corner stores as the biggest problem in their neighborhood.

“I asked them what makes them feel most unsafe, and they said it’s really that,” said Caitlin Sprague, Safe and Sound’s Drug Free Communities organizer, who met with the students every Monday during the school year.

The students chose to focus on Guru Food Store, 4028 W. Lisbon Ave. They reached out to Alderman Russell Stamper and Assistant District Attorney Chris Ladwig for assistance. Ladwig trained the students in Crime Prevention Through Environmental Design (CPTED) and Stamper helped them survey the area around Guru Foods and struck up a conversation with the storeowner.

“It was impressive to see how aware (the students) are about what’s going on in our community and what they want to see improved,” Stamper said.

According to Sprague, the students presented several concerns to the storeowner about the appearance of the store, including their desire for increased lighting outside, less signage in the windows so people could see inside and better-positioned security cameras.

Manta Singh, co-owner of Guru Foods, said that the students came with the alderman to check on the progress of these changes. “We are in the process of putting in new lights outside, just waiting on some insurance stuff. They should be done by next month,” she said.

Sprague noted that the storeowners seem surprised every time the students come back, but that they are responding positively. “I don’t think they thought we would follow up and hold them accountable,” she said. “But they’re always respectful to us when we come in and are respectful to the students when they come in to shop on their own time.”

Youth council members also are building relationships with law enforcement. Sprague described this phenomenon as a “lovely side effect of this project.” At the beginning of the year, almost all of the students “really, really hated the police,” she said. “After (Sergeant Theresa Janick) showed up to the training with the assistant district attorney and broke down that barrier, the students began to request that the officers come to more of their meetings and activities.”

In addition to their work with the corner store, the youth council participated in a neighborhood cleanup and an artistic board-up of a nearby foreclosed home. When choosing a house to creatively board up, Sprague said the students asked, “Can we do something near the store and near our school? Because then we’re not just making the store safer, we’re making the whole surrounding area safer.”

The students painted boards with bright colors and themes ranging from zoo animals to galaxies. The top of one of the biggest boards read “education first” and featured the logos of all of the colleges that the students hope to attend.

Mayor Tom Barrett and the city’s Anti-Graffiti initiative recognized the students for their work at a recent event called “Respect My Neighborhood. Respect Public Art.” Stamper, Alderman Jose Perez and Common Council President Mike Murphy expressed their appreciation for the students at the event, along with several officers from the Milwaukee Police Department and representatives from Safe and Sound and Habitat for Humanity.

The Westside Academy II youth council has been an active part of Safe and Sound’s programming for the past two years. Sprague explained that the council’s goal is to build students’ leadership skills. “The council has transformed them over the year to show them that their voice matters and that they do have power within their community,” she said.

“What we want to do is we want to inspire people,” added 7th grader Tarajia Cade.