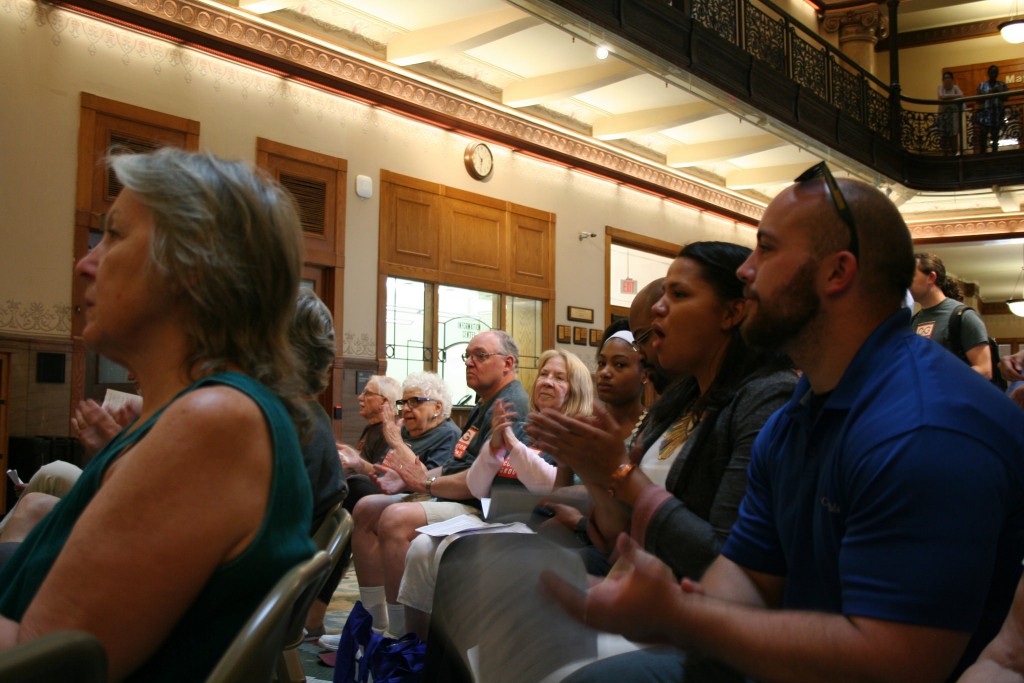 Sherman Park resident Frank Finch III and a crowd of Common Ground supporters climbed the stairs of City Hall Wednesday morning to deliver the signatures of 460 residents to the office of District 7 Ald. Willie Wade.

The petition, collected in the Sherman Park neighborhood by a group of 90 volunteers in two hours, urged Wade “to deal with the blighted conditions of the homes in his district” before supporting public funding for a new Milwaukee Bucks arena. Wade was not available for comment.

Finch said there is a foreclosure next to his home on 44th Street that is owned by Nationstar Mortgage Holdings, Inc. Bucks owner Wes Edens is a majority shareholder and chairman of the board of directors of the company, the second largest mortgage servicer in Milwaukee. Common Ground claims that almost 300 of the more than 3,000 Milwaukee properties Nationstar services are in foreclosure.

“No one’s living there, the city has had to take it over, it’s a piece of junk and it’s hurting my property value. It’s just terrible,” said Finch, adding that there are a number of houses in similar condition throughout Sherman Park.

Common Ground, a nonpartisan, issues-based group of professional organizers and community organizations in southeastern Wisconsin, called a press conference in response to a recently unveiled funding proposal for the new arena. The plan would put taxpayers on the hook for $250 million plus interest, borrowing at least $148 million. Over 20 years the total public contribution could reach more than $400 million. 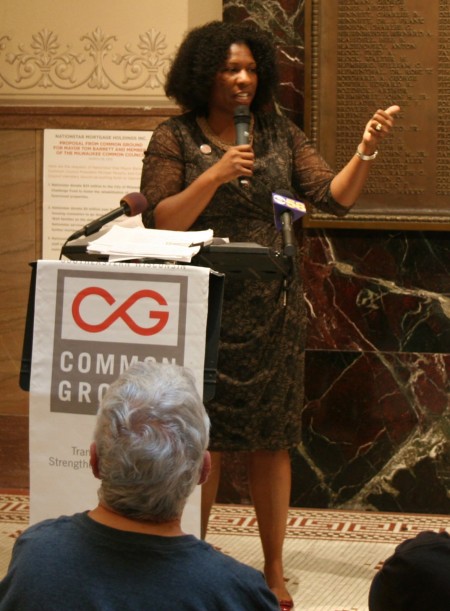 The Wednesday morning event, which drew about 60 people, marked the beginning of a week-long push by Common Ground asking residents to contact their city, county and state representatives in an effort to turn the tide of political opinion on the issue.

“We’re asking [people] to make phone calls, emails, send tweets, letters to their elected officials,” said Keisha Krumm, lead organizer at Common Ground, who also urged supporters to sign an online petition. “We should oppose the use of public money because [the Bucks owners] don’t need it, they don’t deserve it and there’s other things we could use our money for.”

In 2014, Common Ground unveiled its Fair Play campaign that argued for an investment of at least $150 million in Milwaukee County athletic facilities and playgrounds should public funds be used toward a stadium. Now, the group is asking Nationstar to invest $30 million in the City of Milwaukee Challenge Fund “to address the foreclosure issue,” said Krumm. The city owns more than 1,000 tax-foreclosed homes. Common Ground has a meeting scheduled with the mortgage company’s CEO on June 17.

Common Ground supporters say the issue comes down to a question of priorities. Willie Davis, pastor of Invisible Reality Ministries, an organization that provides social services, counseling and mentorship to youth and families, said politicians complain about high crime rates and a lack of school funding but refuse to actually do anything about it.

“I’m not a person who says we pay way too much in taxes and we should reduce taxes,” said Sharon Depue, who attended the Wednesday gathering. “I would be happily taxed more if it went to things that I felt were important to our community as a whole.”

Ald. Bob Bauman has been critical of the closed-door discussion process that led to the funding proposal as well as numerous options discussed before the plan was released, all of which involved borrowing. He proposed an alternative that would generate $125 million per year by increasing the sales tax in Milwaukee County — enough to pay for the arena up front — while providing dedicated funding for public parks, transportation and local cultural institutions. That plan has been largely ignored.

“We appreciate Alderman Bauman making a case for something else, something that will serve our city and our people,” said Finch.

Krumm and Depue weren’t familiar with the details of Bauman’s plan, but both said they would be willing to consider it. Davis acknowledged that “anyone can come up with different scenarios” but he said what matters is whether there’s enough political support.

“It goes back to politics and if, at the end of the day, they’re willing to agree on something like that. And, that’s the difficult part,” Davis said.

“We have to operate under the structure that has been set by state government,” Mayor Tom Barrett said of the plan, which would involve a new 1 percent sales tax in Milwaukee County to fund the arena. “Local governments cannot enact those taxes and it’s been made very clear to us that the state will not entertain that, at least right now.”

Barrett added that he “appreciate[s] what Common Ground is working toward.”

Depue said this process has revealed the “lack of focus of our local public officials” and “how easy it is for people to come in from outside of our community and dictate to us what we should do and that, somehow or another, our public officials roll over and play dead.

“I find that very disappointing,” she added.

A Marquette Law School poll released in mid-April, which asked respondents about aspects of Gov. Scott Walker’s proposed state budget, said 79 percent of registered voters oppose borrowing $150 million to support a new Bucks arena. Another poll, released at the end of April by the pro-business Metropolitan Milwaukee Association of Commerce (MMAC), said when presented with a “full proposal” 67 percent of Wisconsin voters support public funding for the arena

Polling experts from the University of Wisconsin-Milwaukee and St. Norbert College questioned the objectivity of the MMAC poll, claiming the question was asked in a way to elicit a particular response. MMAC Vice President of Governmental Affairs Steve Baas did not respond to a request for comment.

“Question wording matters,” said Charles Franklin, director of the Marquette Law School Poll. “Ours was very thin on information … theirs was a very elaborate question laying out the advantages of doing the project.”

The MMAC has been an active supporter of the plan to build a Bucks arena. Marquette University, which would be a tenant of the Bucks, recently released a statement indicating support for a new arena.

“This game is about power. And, the Bucks have a lot of power,” said Krumm. “We the people … we should have that kind of power too.”

She said the idea is to “create the sense that we’re not just taxpayers, we’re citizens that can engage in the political process and shouldn’t be taken for granted because we’re not billionaires.”

Davis and other residents are determined to deliver that message. “We are not backing down; we’re not going anywhere,” he said. “We will continue to push this issue because it is that important.”