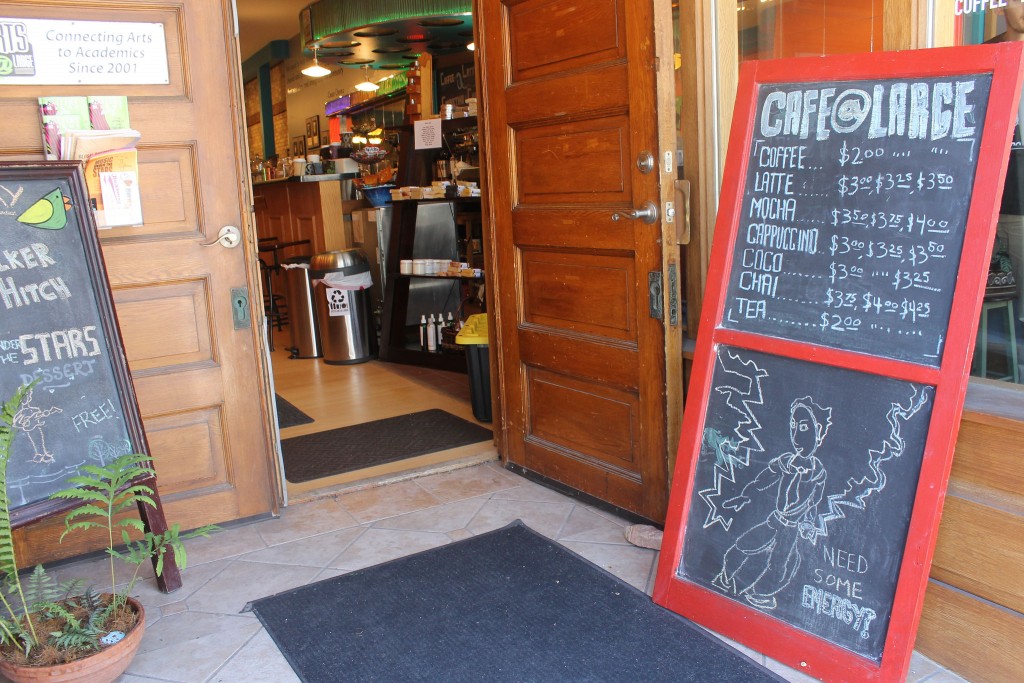 Walker’s Point is filled with charming coffee shops. Cafe @ Large, the latest addition to the neighborhood, offers the customary brews and pastries residents have come to expect, but this cafe has something the others don’t: it is operated almost entirely by Milwaukee Public School students.

Cafe @ Large is a student-led coffee house that aims to provide local teens ages 14 to 16 with business skills such as product marketing and financial literacy. Students worked with professionals from across the city to learn what they needed to do to start a business.

“It gives students a wide range of skills,” said Jevita Brister, lead coordinator for Cafe @ Large, which is a project of Arts @ Large, an after-school arts program for K-12 students.

“After working here a lot of the students have started to change their behavior. Their consistency and excitement for working at the cafe is our best measure for success. They want to be part of this because it’s making a difference for them,” Brister added. 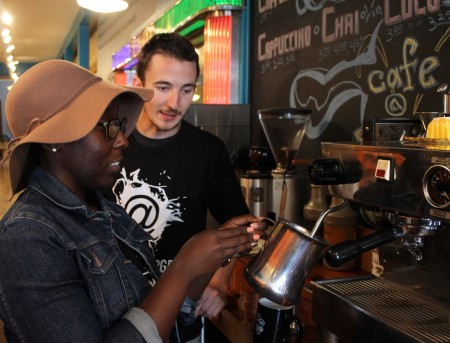 Jevita Brister, lead coordinator for Arts @ Large, prepares a drink behind the Cafe @ Large counter as cafe coordinator Max Kubala looks on. Brister has been working on the cafe project for more than a year. (Photo by Madeline Kennedy)

“Their whole operation really intrigued us,” said Steve Kessler, director of Anodyne’s wholesale operations. “We wanted to work with them to introduce students to an industry they maybe hadn’t thought of before. It’s … not too often you get the opportunity to learn about what it takes to be a barista and get to put those skills to practice.”

Kessler took students through basic barista training and taught them how to craft the perfect espresso drink. He emphasized that an important part of their training was not just learning how to make coffee, but to make good coffee.

“They’re going to know what it takes to make drinks taste good and the knowledge and craft that goes into it,” he said.

Cafe @ Large received its business license from the city in early May, but Brister explained that the planning process was more than a year in the making, and a soft launch took place in December.

“We’ve always had this open space at the front,” Brister said, gesturing to a small bar area near the building’s entryway. “And we knew we wanted to do something with it.”

Before Arts @ Large acquired the building at 908 S. 5th St., the space was a dance club. Today its walls are filled with colorful artwork and quotes about hope and creativity. The bar is the last vestige of the space’s previous life.

“It’s hard to imagine that it used to be anything other than this,” said Nicole Cedeno

Cedeno, a recent graduate of Audubon Middle School, is one of 17 students who have worked at Cafe @ Large during its inaugural season. Students were selected to participate in the program after being nominated by a teacher and submitting an application.

Because of her consistency and dedication, Cedeno was chosen for one of two paid internships during the summer months. She now spends up to 12 hours working in the cafe each week. During Cedeno’s shifts, she has a range of responsibilities that include opening the shop, conducting inventory, washing dishes and making sure machines are ready for operation.

“Oh, and making sure the pastries are here,” she added. “That’s the most important part.”

“The students are amazing,” Brister said. “You can tell that they like being here and are committed to their work. That attitude makes all the difference.”

When the students can’t be in the cafe, the bar is staffed by adults such as cafe coordinator Max Kuballa. Kuballa said that working with students is often the part of the job he enjoys most.

As she heads off to high school in the fall, Cedeno said that she plans to continue her involvement with Arts @ Large.

“I hadn’t even heard of Arts @ Large before I started working here, but now I tell everyone about it,” she said. “It isn’t just helping a few students. It’s helping a whole city. Anyone who participates in these programs is going to walk away with interactions, opportunities and connections they didn’t have before.”

Since the opening of the cafe, odds are they’ll walk away with a good cup of coffee too.

Editor’s note: This story has been updated to correct the spelling of Max Kubala’s name.