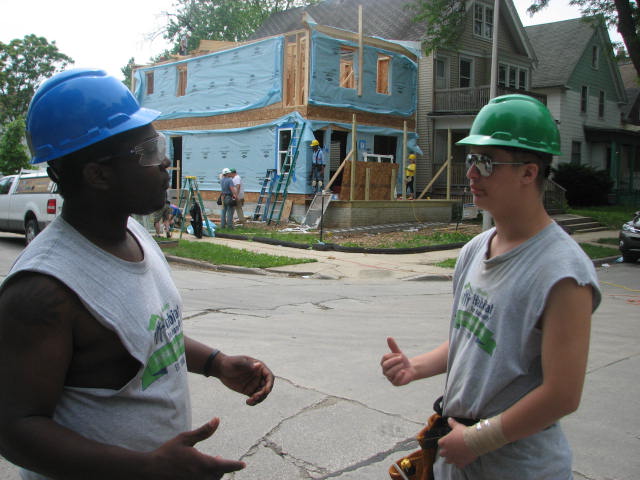 A year ago, Michael Merkel was a homeless high school dropout, sleeping on cold park benches on Milwaukee’s North Side after one too many arguments with his mother.

After two months of avoiding the police and the loitering tickets he could have received, the 18-year-old found himself in front of a counselor who directed him to Milwaukee Area Technical College’s YouthBuild, a program that gives low-income, at-risk youth and young adults experience in the construction trades.

“This has meant a lot to me,” said Merkel, who now lives with relatives and is working on getting his GED. “I took the initiative to better my life and (it) has been much better ever since.”

Merkel was one of several program participants who recently volunteered for five days on the construction sites of two homes being built by Milwaukee Habitat for Humanity in the 2100 block of North 42nd Street in the Washington Park neighborhood, where 45 percent of families live in poverty. 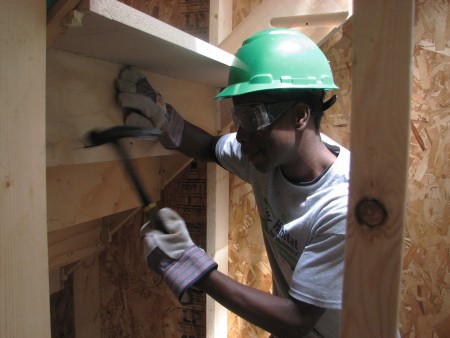 YouthBuild participant Curtis Thomson pounds a nail into a staircase as he helps build a Milwaukee Habitat for Humanity home. (Photo by Brendan O’Brien)

Milwaukee Habitat for Humanity partners with the MATC YouthBuild program to provide participants opportunities to work with professionals on building sites, where they are taught basic framing and general construction skills while learning how to operate as a construction team.

“It’s especially important when you can get young adults from the central city involved in the trades because there is such an empowerment in making a difference,” said Michael Cockroft, a Habitat for Humanity construction director.

The YouthBuild program assists participants in getting their GED and requires them to complete six months of classes in construction trades such as carpentry, welding and plumbing, and 80 hours of community service with organizations such as Habitat for Humanity.

YouthBuild participant Deshawn Washington, an 18-year-old high school dropout who like Merkel was once homeless, said the program gives his life purpose.

“I can do something that I love while helping to change lives,” he said, wearing a hardhat and a belt full of tools.

MATC was awarded a $1.1 million U.S. Department of Labor YouthBuild Grant in 2014 to educate 72 youths in Milwaukee. In addition to Habitat for Humanity, MATC partners with Journey House, Spotted Eagle and KPH Construction Company. Another YouthBuild program at the Milwaukee Christian Center celebrated building its 12th house in 2014 and has completed its 13th home, in Clarke Square.

The YouthBuild program was developed to decrease the city’s 22 percent youth unemployment rate and increase the graduation rate of Milwaukee Public Schools, where 39 percent of students do not finish high school in four years.

“The program takes high school dropouts, the people that society says will not make it, and tells us that there is hope for us,” Washington said.

In addition to obtaining education and experience in the trades, YouthBuild participants learn life lessons on the construction sites, according to Cockroft.

“They learn critical thinking and the ability to tackle a fear such as not having the experience in doing something and not being afraid to try it anyway,” Cockroft said. The program is much more “than how to swing a hammer and how to pound a nail. There is so much that they learn on a build site that they can apply to everyday life.”