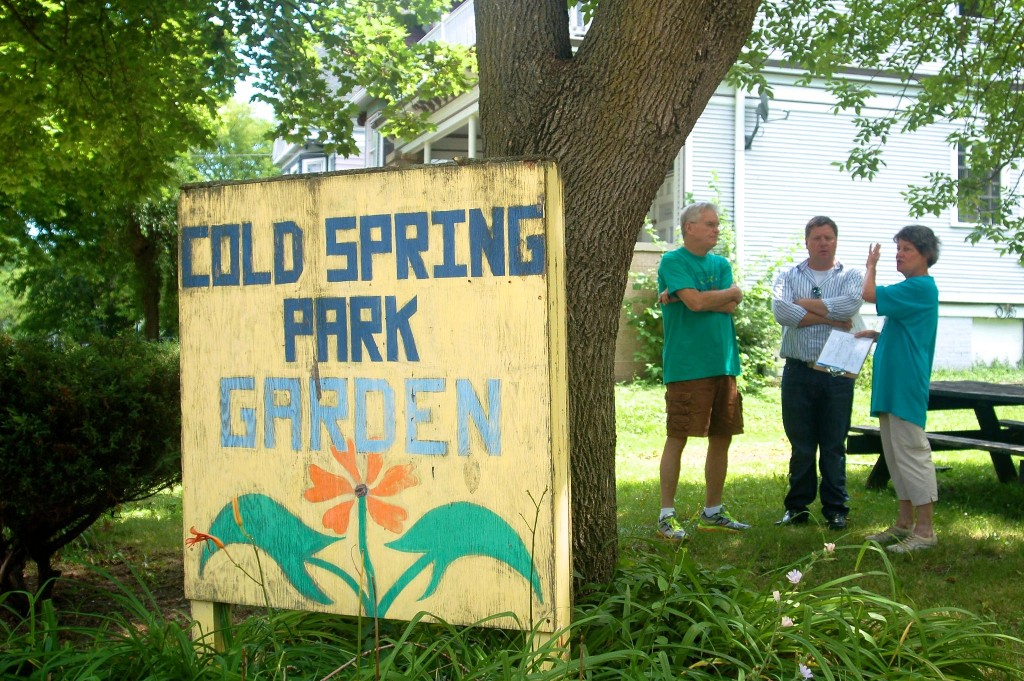 A vacant lot on McKinley Boulevard and 28th Street will become a park and community garden this fall thanks to three years of persistent effort by Joyce Seiser, president of the Cold Spring Park Neighborhood Association.

“It’s just been my dream to see something really pretty and attractive and safe. There is no other community gathering space in Cold Spring Park,” she said. Cold Spring Park is a residential neighborhood bounded by the north side of Highland Boulevard and the south side of Vliet Street, from 27th to 35th streets.

Seiser has worked since 2012 to garner the financial support needed to turn the lot into a formal neighborhood green space.

She said that neighbors’ complaints about criminal activity in the vacant lot spurred the idea for improvements. More specific plans were later generated through a series of neighborhood meetings with an architect from Marek Landscaping. According to Seiser, the garden is designed to “make the area less conducive to criminal activity and more conducive to the activity we do want.” 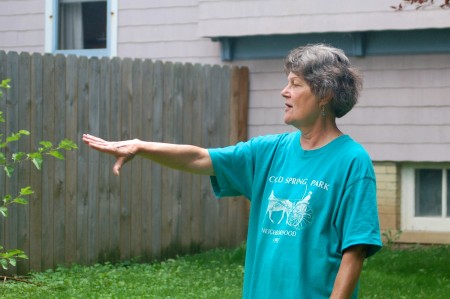 Joyce Seiser describes her vision for her dream park in the neighborhood she proudly calls home. (Photo by Allison Dikanovic)

Rain gardens will surround its perimeter to more effectively handle storm water runoff and to decrease the flow of foot traffic through the garden. Low shrubs will be planted to maintain clear visibility. An oval path will surround the park, paying homage to the horse and buggy racetrack that used to be in the historic neighborhood. The second phase of the garden installation will include benches, new signs, a little free library and a dog waste receptacle.

After pitching her idea, applying for grants and permits, and building connections with local organizations such as Clean Wisconsin, Seiser helped bring together a group of stakeholders whose collaboration is making the project feasible. The Milwaukee Metropolitan Sewerage District is providing the initial funding for the garden, and the Department of Public Works (DPW) will fund the rest of its implementation through the city’s Strong Neighborhoods Plan. Near West Side Partners (NWSP) facilitated the partnership between the Cold Spring Park Neighborhood Association and DPW.

“The representatives from Cold Spring Park were so passionate about the project that we felt it was important for us as an organization to find resources to make it happen… It’s a tribute to the advocacy of the Cold Spring Park neighbors,” said Rana Altenburg, president of NWSP and vice president for public affairs at Marquette University.

The dedication of neighbors to maintain the green space dates back to the 1970s when the lot became empty after a house burned down. “Neighbors adopted the lot,” said Alderman Robert Bauman and used the space as a park and garden. In more recent years, however, upkeep of the space has deteriorated. The neighborhood is determined to turn that around.

Bauman described the garden project as “a story of slow evolution of neighbors taking charge of their own space.”

Robert Wutke lives across the street from the lot and is excited about the coming improvements. “It will benefit the vision that we the community have to present an urban space that is very welcoming… Everyone who comes through will know that our community has a sense of pride,” he said.

Seiser has kept neighborhood residents involved in every step of the park’s progress. They are meeting soon to discuss what plants will go in the garden. “I need people in the neighborhood invested in planting and taking care of this garden. It’s theirs, it’s ours… I want people to feel a sense of ownership so they come and use it. Bring your lawn chairs. Have picnics here. Have parties here. Use it, it’s ours.”

This sense of ownership is what attracted DPW to the project. “It’s all about the neighborhood involvement. A lot of the neighborhood parks and lot projects that we get involved in do not have buy-in from the neighbors and that’s essential for them to be successful,” said Scott Baran, a landscape architect for DPW.

Seiser hopes that the park can serve as a model for what can be done with other empty lots in the city. The groundbreaking ceremony for the Cold Spring Park Garden will be held on Aug. 11 at 6 p.m.