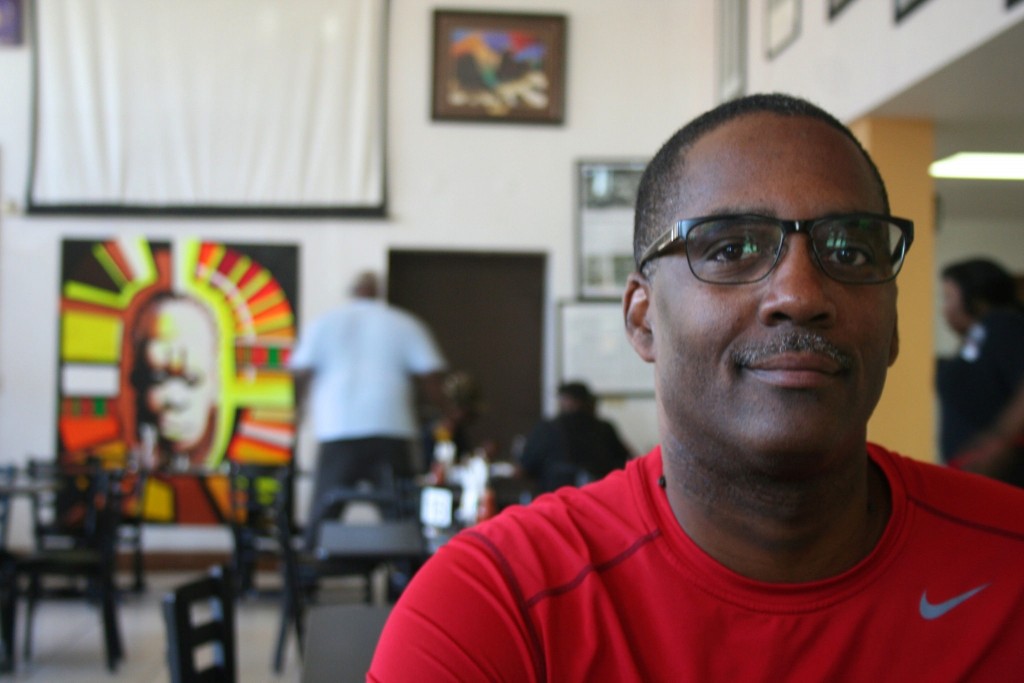 Reggie Jackson is head griot at the online Black Holocaust Museum, located at 4th Street and North Avenue until 2008. (Photo by Jabril Faraj)

In early 2013, the Racine Public Library hosted a program highlighting Polish heroes — people who helped Jews escape death at the hand of the Nazis — during the Jewish Holocaust in Europe. But Jessica MacPhail, the library’s director, felt there was more that needed to be said.

So, MacPhail, who has been involved with a Racine anti-racism group since 2005, invited Black Holocaust Museum Head Griot Reggie Jackson to speak on the black holocaust. MacPhail said the presentation was so well received that the library invited Jackson back. Since then, he has given a talk on Joshua Glover, a runaway slave who took refuge in Racine and flouted fugitive slave laws, and other race-related topics. Most recently, in early July, Jackson debuted a series titled #DoBlackLivesMatter.

The series of four talks examines the historical context of the statement “black lives matter,” which has become widely repeated, and derided, as a result of a series of high-profile killings of unarmed black men and boys by police, starting with the death of Trayvon Martin in 2012. A second series of talks will be held at the Villard Square branch of the Milwaukee Public Library (MPL) on Aug. 3, Aug. 5, Aug. 10 and Aug. 12 from 5:30 to 7:30.

Jackson’s series addresses the 400-year-long history of black people in America, starting in 1619 when the first Africans were brought to the British colonies. Within 20 years, Massachusetts passed a law legalizing slavery and all of the other 13 original colonies followed suit. 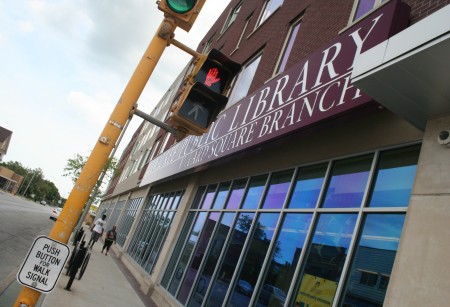 The Villard Square branch of the Milwaukee Public Library. (Photo by Jabril Faraj)

“There’s been a … consistency in the way blacks have been devalued,” Jackson said in an interview. “We don’t study our history in-depth enough to realize it. We don’t talk about these things because they’re ugly things to talk about.”

Slavery “set the foundation” for the devaluation of black lives that Jackson said continues today in America. West African and European relations began as a “power relationship” as early as the 1400s when Portuguese sailors kidnapped a group of Africans who became servants and slaves.

“You’re in this situation where, from day to day, generation after generation, you are debased as a human being,” he said, adding that an 1811 manual on “how to control your slaves” mentally and physically recommended that “you debase them in such a way that they begin to accept their condition.”

Jackson said, as slaves, black men weren’t able to protect their families and it was against the law in every state to teach blacks to read and write. “You begin to have a … lack of self-worth — you don’t value yourself, you don’t value people who look like you,” said Jackson. “And, this is part of the mindset that continues even after slavery ends.”

On the other end, the mindset that enabled slavery resulted in “legal and extra-legal violence against blacks.” Jackson said during slavery it wasn’t illegal to kill a black person and someone doing so would not face criminal charges. The killer, however, could be held liable for trespassing against a slaveholder’s property. Jackson also cited Jim Crow laws, which promoted segregation, the refusal of Congress to pass anti-lynching laws and that “the first police departments in America were slave patrols.”

“In order for you to enslave millions and millions of people over several centuries, you have to develop a mindset where you don’t value their lives. You can’t have a situation where you look at them as your equals and treat them the way that these people are treated,” Jackson said.

Eventually, people — both black and white — began to question slavery. To justify slavery, purported scientists such as Samuel George Morton, Josiah Nott and others studied black bodies with a purpose of showing anatomical and intellectual differences between blacks and whites. But this research, influenced by the racial biases of its proponents, resulted in misreporting of data.

“If you go in thinking that blacks are inferior to whites … you’re going to prove that that’s true,” Jackson said, adding that the flawed research was accepted and “became the lasting justification for devaluing black lives in America.”

These pseudo-scientific justifications for black inferiority allowed for scientific and medical experiments to be perpetrated on black people by pharmaceutical companies, prisons and the United States government. The continued devaluation also resulted in the perpetuation of caricatures that promoted blacks as lazy, unintelligent and inarticulate.

“That’s part of the psychology that allowed this mass incarceration to occur,” said Jackson, referring to the fact that about 40 percent of America’s 2.3 million prisoners are black, despite being 13 percent of the population. “We criminalize blacks in the minds of America and, so, we have no problem throwing a million of them in prison, and throwing away the key and not really caring.”

“It has to have this debilitating impact on you, mentally,” Jackson said. “You have to begin to believe that you deserve this.”

Under such conditions, “it becomes very difficult to have a positive view of who you are as a person,” Jackson said. The emergence of the black power movement, Black Panther Party and the civil rights movement changed some of that perception but much of the momentum that had been built dissipated with the advent of the Vietnam War, the assassination of Martin Luther King Jr. and COINTELPRO, an FBI program that aimed to discredit King and infiltrate domestic political organizations such as those fighting for black civil rights.

Jackson said that before King’s death the civil rights leader had shifted his focus to concentrate on economic issues and inequality because he realized that “if you can’t uplift people economically then all the other stuff you do will not make a difference.”

Programs were created, the War on Poverty was declared but a covert effort persisted to break up black leadership to assure, in the words of FBI Director J. Edgar Hoover, another “black messiah” would not emerge.

Though Jackson isn’t sure whether America is ready to have an honest conversation about the value of black lives, he hopes that providing information and context will inspire people to “challenge the system we live in.”

“I was appalled, to put it mildly,” said Mark Giese, a technical writer who is white and has attended a number of Coming Together Racine film presentations. Giese recommended attending the presentations even though the information might make people uncomfortable.

Maria Cunningham-Benn, who is a digital projects librarian at MPL and also works with the Black Holocaust Museum, said she expects a diverse audience of people who “want to discuss issues of race and issues of economic disparity” and that “the library is becoming, more and more, that place that people can go and have these discussions.”

Jackson agreed. “We can’t just say ‘black lives matter’ and just leave it at that. We have to question whether or not it’s really true,” he said. “Because if you just assume that they do then there’s no problem, there’s nothing to fix.”