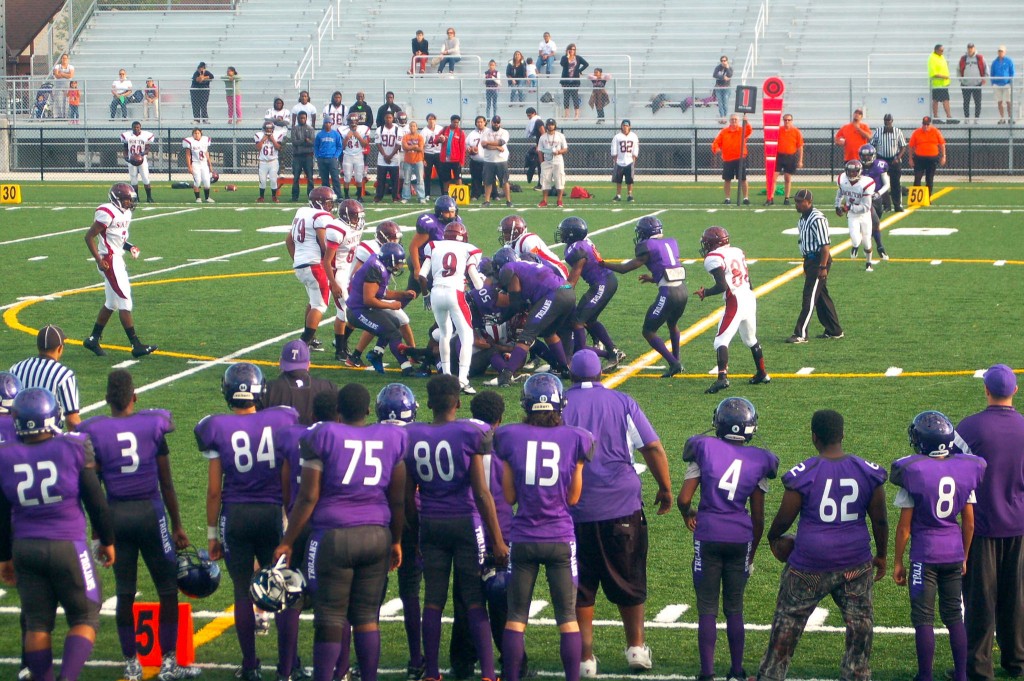 The scoreboard lit up. The two teams emerged from their locker rooms onto the wide expanse of turf. The officials took their places. The fans cheered wildly.

As the Bradley Tech Trojans and the South Division Cardinals lined up along the sidelines for the first game of the season Thursday evening, the atmosphere felt more like a contest that could air on ESPN than a high school football matchup. It was the first football game ever played in the newly reconstructed South Stadium at 971 Windlake Ave.

The stadium is located next to Hayes Bilingual School and everything is new: stands, press box, lights, sound system, concession stands, ticket booths, team locker rooms and a referee room. The field is now made of artificial turf.

“It’s awesome. It’s beautiful, especially compared to what they were playing on before,” said Jill Radowicz, mother of a South Division football player. 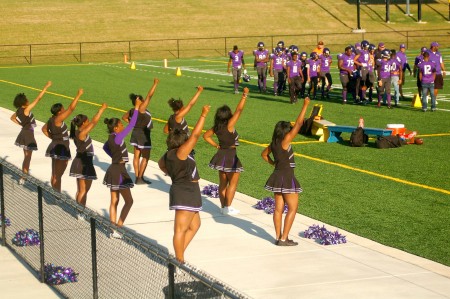 South Stadium will be the home field for the football and soccer programs of South Division, Bradley Tech, and Bay View high schools. It was designed to accommodate the South Side community, said Bill Molbeck, MPS athletics commissioner. For example, the soccer field in the new stadium will be wider than before, because the surrounding track was removed. “We saw that as another plus,” Molbeck added.

The turf field will be significantly more durable than grass, allowing multiple games in a day to be played on it without damage, even if it rains.

South Stadium was a landmark on the South Side for almost a century, and the new field aims to honor that. Bricks from the original stadium make up the entryway that fans pass as they walk in to attend a game, and alumni who played on the field are invited to come back to support their teams in the newly improved environment.

“Alumni are hopeful that the stadium can bring big reunions to relive the greatness of Tech and support our newest generation of Tech,” said Greg Becher, the athletic director at the school officially called the Lynde and Harry Bradley Technology and Trade High School, 700 S. 4th St.

Richard Gilbert, a Tech alumnus who now supports his son on the football team, is proud of the changes. “It’s a big difference from when I played here and it was all muddy. It looks real nice. The seats are better. It’s like night and day. I’m glad [we] get to play on a field like this, of this quality,” he said.

Molbeck said that he hopes the new stadium fosters a sense of pride among the athletes who play on it because it is “something similar to what they would see and play in when they go to the suburbs and play in their non-conference games.”

South Division football coach Carlos Rodriguez said his players understand that South Stadium is a special field to play on and they want the city to know it’s their home field. “They like that they have a nice facility. It makes them feel like a real football team compared to the dirt fields they used to have to play on,” he said.

Rodriguez added that he hopes that the surrounding neighborhood and fans from the respective schools also appreciate the new South Stadium. “It’s all about taking ownership. I hope to see crowds and see it bringing the community together,” he said.

Though Bradley Tech defeated South Division to win the first football game at South Stadium, Becher says that the new field is about something much bigger.

“The stadium has created a buzz about playing football and soccer in a modern facility, which will link the past memories to memories that are to be created,” he said.

Editor’s note: This story has been updated to reflect the correct name of the South Division High School football coach.