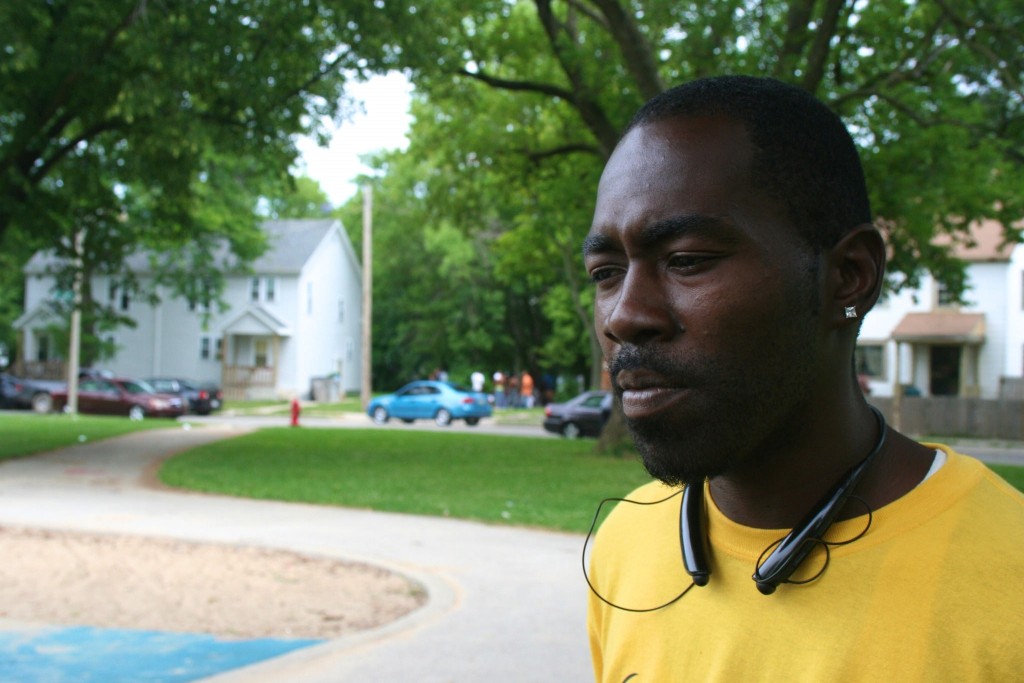 Teddy Ellis stands in Garden Homes Park while a group of neighborhood youth gamble across the street. (Photo by Jabril Faraj)

The city-funded Safe Zones initiative operating in the North Side neighborhood of Garden Homes has seen early progress, but the alderman who sponsored the initiative said that the Milwaukee Police Department is not doing enough to help it succeed. The program, which began in June, is intended to build relationships, mediate disputes and prevent violence before it happens.

“Without a doubt, there needs to be a more, kind of, embracing of the Safe Zones strategy and the setup [on the part of] the police department,” said Ald. Ashanti Hamilton, who sponsored the initiative. “I would say that that’s clear.”

Asked about Hamilton’s statement, Milwaukee Police Department District 7 Capt. Jutiki Jackson stated, “I’m not in a position to say that the police department is or is not working with that initiative, as far as cooperation.” Safe Zones founders and Hamilton said Jackson had been the department’s point person for the initiative.

Lori Lammers, an MPD community liaison for District 5, which encompasses the Garden Homes neighborhood, said of the initiative, “We’re aware that it’s going on but the leaders that are running the initiative haven’t necessarily asked us to be too much a part of it.”

The initial Safe Zones proposal included three core pieces: ambassadors, who intervene to mediate disagreements and prevent violence; a requirement that police officers who patrol the designated areas check in regularly at a neighborhood headquarters; and a community corrections aspect that would focus on restorative justice for those being released from or going through the criminal justice system, according to Khalil Coleman, a Safe Zones founder. The idea was to have “accountability on all levels,” he added. 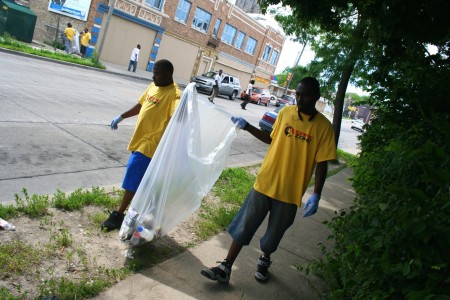 Khalil Coleman and Teddy Ellis (right) pick up garbage on W. Atkinson Avenue in Garden Homes, setting an example for young people in the neighborhood. (Photo by Jabril Faraj)

Only the first piece, the ambassadors, was implemented over the summer.

At a meeting early this year, Jackson took issue with the need for officer check-ins and asked for an official Memorandum of Understanding (MOU) that would govern a partnership, according to the Safe Zones founders. Others at the meeting included Coleman, Safe Zones co-founder Shawn Moore, Hamilton and representatives from Safe & Sound, the mayor’s office and the district attorney’s office.

According to Moore, MPD thought words such as “shall” and “must” were “too strong.”

Jackson disputes that account. He said the meeting was “a very, very early introductory conversation” and that he “gave the founders specific instructions on what steps needed to be taken to help get the police department involved.” Coleman and Moore stated that Jackson has not communicated with them since that first meeting, which the Safe Zones founders organized.

“We were told that Captain Jackson was the one we had to deal with … so we left it at that,” said Moore.

Coleman said when the prospect of an MOU came up, it became “a whole other ball game,” adding that the group would have needed to get an attorney. In addition, he said the founders viewed the request as a way for the department to exercise control over the initiative. The meeting ended without an agreement between MPD and the Safe Zones founders.

Ambassadors associated with the initiative worked in the area from June through August, focusing on three main “hotspots” — a convenience store, a nearby park and a one-way street known for illegal activity.

Coleman said the corner store “wasn’t as crowded anymore” and long-time Garden Homes resident Martha Freeman said the area — specifically, the one-way street, which had been a hub for prostitution and drug activity — has a different feel. Ambassadors have successfully intervened in and de-escalated at least two potentially violent confrontations involving weapons, Coleman said.

The Safe Zones founders recounted several interactions with MPD where they said police did not respect the role of the ambassadors. Moore said that kind of approach will not help improve relations between police and the community.

“I think there’s still a lot of … distrust between the community and the police and that’s what we’re working to help lessen,” said Lammers, adding that MPD representatives attend community events and “support people when they ask us to come out and support them.”

Moore said there’s more to it. “Come in respectful, and you’ll get respect,” he said, adding that “back in the day” officers would “eat a peach with my grandma.”

“In order for the neighborhood to trust you, they have to get to know you,” said Moore. “That’s all we want.”

Hamilton said he had hoped the Safe Zones Initiative, which received $50,000 in city funding, would be embraced by MPD in the same way as a student ambassador program, which he also sponsored. The point of these initiatives is for the department to start policing differently and listening to residents, he added.

Hamilton said building trust has to start with “regular interaction, with particular police officers who are already inclined to not police in the traditional way that created the distrust in the first place.”

Hamilton also said it’s important for ambassadors to have a designated contact within MPD who respects their role in the neighborhood and understands the sensitive nature of the information ambassadors can — or cannot — share. “That’s where it starts.”

Lammers, who said she is willing to be that contact, added that decisions made by the chief are “not always communicated down to the officers that are responding to calls” but agreed that “we do need to build those relationship on an everyday basis.”

Dugan Meyer, a University of Kentucky researcher who observed the initiative closely, said MPD leaders “envision a partnership … in which the ambassadors would be in touch with them in ways that wouldn’t jeopardize the trust that they need.” Coleman and Moore acknowledge that is central to the initiative’s success.

However, Meyer said he witnessed officers on foot patrol pass the ambassador headquarters without stopping or acknowledging the ambassadors, who are “very visible,” he said.

“There seems to be this disconnect,” Meyer said. “If these higher-ups want that relationship, why aren’t they organizing themselves more intensely to make sure that those cops stop in and say hello?” Meyer, a graduate student researching community policing models, has conducted multiple interviews with ambassadors, police and residents.

On July 24, a Milwaukee Neighborhood News Service reporter observed as ambassadors confronted a group of about 20 young men from the neighborhood who were gambling in Garden Homes Park. Ambassadors said they had been in contact with the group before, first asking them to move from in front of the corner store. The young men obliged, moving to the park.

Moore spoke with the group; they moved across the street but the game continued. He came back frustrated. “I talk to these kids every day, man. They continue to do the same things but, you know, it’s really hard to fight it when the police come through and tell them that it’s okay to gamble,” said Moore.

“I know that’s not accurate,” countered Lammers. “Public gambling is an illegal activity in the City of Milwaukee. … If you are out gambling somewhere that is in a public space or a space that you have no right to be occupying, then we’re going to take other action.”

Lammers added that several people have complained about the gambling and that officers have been directed to respond and issue citations if needed. “We’ve been dealing with that issue for a couple months now with the same group of people.”

Approximately an hour after ambassadors approached the crowd, three police squads dispersed the young men. No citations were given.

The ambassadors and other residents there at the time said a park is somewhere children should feel comfortable. Large groups of people, such as those gambling, don’t allow for that type of atmosphere. “You’ve got to understand there’s a line; you’ve got to draw that line,” said Damion Boothe, 39, whose family has lived in the area for 65 years. “Enough is enough.”

At the same time, Ricky Harrison, an ambassador who grew up in Garden Homes, said, “They’re all part of this community, too,” referring to the young men.

Both the ambassadors and police talk about a generational disconnect between homeowners and young people in Garden Homes. The ambassadors view this disconnect as a breakdown in respect that goes both ways.

“We’re trying to bridge the gap between both (demographics) … and create one community,” said Coleman. “It needs to be a community that’s reflective and that represents everybody involved.”

Multiple ambassadors and residents said that the young men need something positive to do. “How can you tell someone, ‘You can’t do this, you can’t do that,’ but, then, they’re sitting there [like], ‘Alright. What can we do, then?’” said Teddy Ellis, an ambassador captain.

Hamilton said that cultivating a working relationship between the Safe Zones and MPD is critical. “In order for [the initiative] to be successful, in order for it to operate the way that it needs to operate, in order to maximize the use of this strategy and the resources, there has to be cooperation with law enforcement.”

According to MPD Chief Edward Flynn, “We’re not averse to partnerships.” He added, “I’d like to see some results from their work and then we can talk about an MOU.”

Coleman agreed that there needs to be a formal understanding that incorporates, at a minimum, the community policing aspect of their plan. He said the ambassadors would like to be notified when police respond to a call in the neighborhood. And Moore invited Flynn to come talk with residents and “see if it works,” adding that sometimes numbers “don’t do [the work] justice.”

“We can give you the incident, the outcome and the justice behind it,” said Moore, referring to a situation that ambassadors mediated successfully. A man who damaged goods worked off the value, the store owner declined to press charges and “no one was hurt.”

“It was a result that everybody was happy with,” said Moore. “That’s justice.”

The Safe Zones initiative is expected to go before the city’s Community and Economic Development Committee for renewed funding before the end of the year.