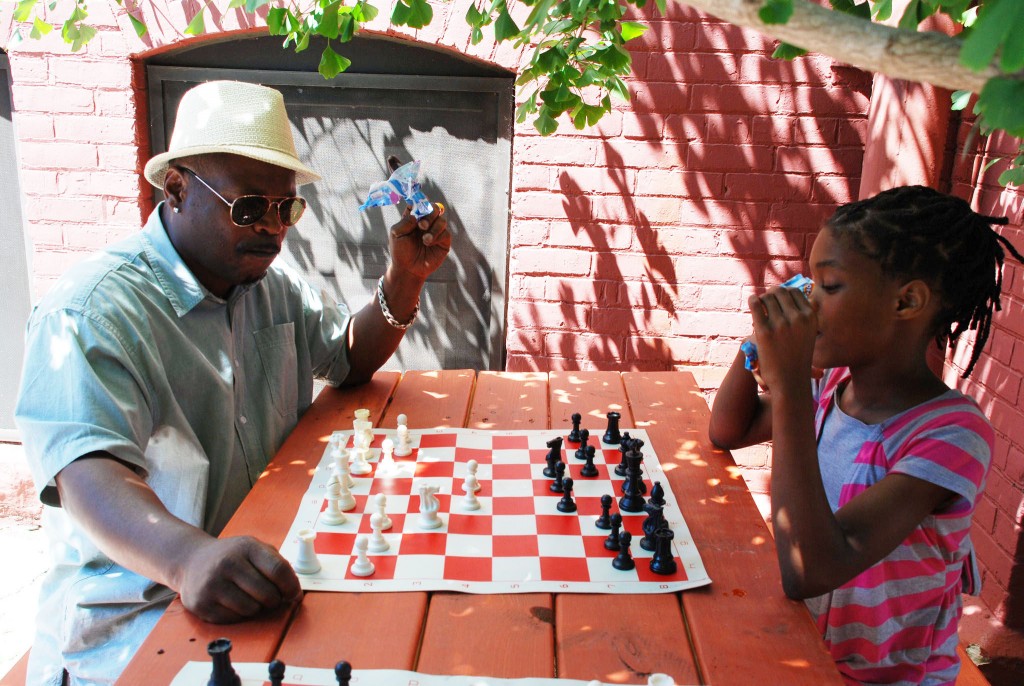 Chicago native Quan Caston’s first foreign assignment, in England, offered him opportunities to interact with people of many backgrounds and to consider his identity as an American and an African-American in a new context.

“It broadened my horizons,” Caston said of his U.S. Air Force service. “It was an overwhelming, interesting, fulfilling and beneficial experience.”

During his eight years of military service, two tools helped him connect with others — his knowledge of chess and his talent for drawing, Caston said. Both can be shared without a common language and both facilitate a unique way of thinking about the world.

“When I got back to the United States, it wasn’t long before I realized … there’s a war here. I hear more gunshots here than (I did) in an actual war zone,” said Caston, who also served in the Middle East.

Now a resident of the Amani neighborhood, Caston decided that he wanted to contribute to a more peaceful community by teaching what has been beneficial to him, “starting with the children,” but including their families. 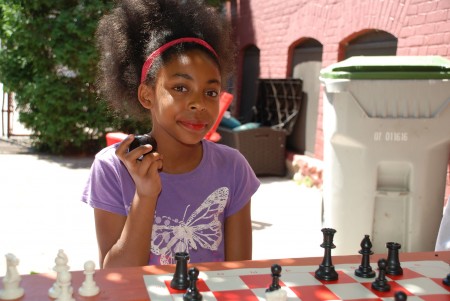 Quan Caston named fifth-grader Elana Sinclair “Chess Student of the Summer” for being a self-starter with an excellent attitude. (Photo by Andrea Waxman)

Caston teaches chess and a variety of art programs to central city children through arts and education organizations including Arts @ Large.

“I would love for the children to learn to be better decision makers throughout their lives beginning right now, right here … like the chess player.” The chess player doesn’t just move randomly, he said, but rather according to a system based on strategic and tactical plans.

“Quan connects chess to literacy, mathematics and critical thinking skills,” said Ryan Hurley, community school coordinator at Auer Avenue School, 2319 W. Auer Ave. Caston taught chess and led a variety of art projects there during the summer. “Kids love him and when he’s not here, they ask about him.”

Caston volunteers at COA’s Goldin Center, next to the school, and lives in the neighborhood, so the kids see him out in the community, Hurley added. “He’s somebody that they are able to connect with beyond the classroom.”

Caston also works with youth victims and perpetrators of gun violence through Children’s Hospital of Wisconsin’s Project Ujima. He teaches them how to play chess and use it as a decision-making model.

“Some of them are the victims of gunshot violence and some of them could very well be … the victimizers, so my objective is that they think like chess players,” he said. Caston wants them to be able to think strategically and consider the consequences and rewards of their actions, he added.

Learning thinking skills is the aspect of chess that most appeals to Tunisia Sims, who was playing the game at Auer Avenue with her 7-year-old daughter Briana on a summer afternoon.

For her part, Briana said she likes to play chess because it’s fun.

Fifth-grader Izeria Richards agreed that chess is fun and cool.

“The pawns are like people,” Izeria said. “For me, the queen stands for my mom and the king stands for my dad.” When she plays a game of chess it reminds her of playing with her brother and her sister, she said.

Ebony Butler said her sons, a high school freshman and sixth-grader, are calmer when they participate in Caston’s chess classes.

Another project Caston brought to Auer Avenue School and neighborhood kids is the construction of a large-scale European-style castle. Caston collected cardboard and other discarded materials from COA Goldin Center as it was furnishing its new Burke Early Childhood Education Center and other sources.

Using renderings Caston drew, the children worked on the project in several locations, building drawbridges and towers. He hopes to incorporate the castle into a drama project he is leading at Auer Avenue this fall. Caston is “an incredibly creative person,” Hurley noted.

Caston hopes to create a chess society made up of a self-selected group of committed students that will compete with chess teams from other schools. He has designed shirts and a tent that will house “a mobile chess city,” he said. And he’s planning fundraising activities to make all this possible.

“This is my calling as well as my career,” said Caston, who also is teaching chess at Transition High School, 2610 W. North Ave., this fall. When he can find formal programs through which to teach chess and art, he does so, but when he can’t, he teaches children wherever he finds them, he said.

“They may as well pay me,” he added, “since I’m going to show up anyway. And the kids, who all know me, are going to come running when they see all the neat stuff that I have.”

Editor’s note: This story has been updated to correct Quan Caston’s relationship with COA Goldin Center and the high school where he teaches chess.