You are here: Home / News / Arts and Recreation / Clarke Square residents come together to bring art to the alley
Share this... 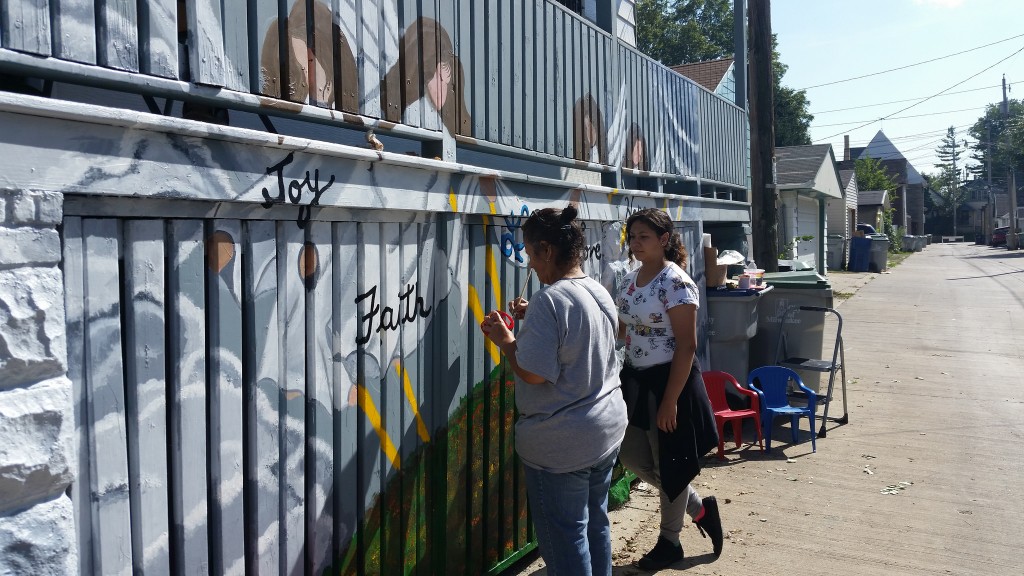 Local artist Elsa Ali puts the finishing touches on her mural as her daughter Izabella, 14, looks on. (Photo by Edgar Mendez)

Lona Morales, of Clarke Square, stood in front of a mural painted on her alley fence depicting angels floating above a flowery hill, with the name Lisa painted in blue surrounded by the words “joy,” “faith” and “love.”

“It’s like I feel her spirit when I look at the angels,” Morales said, referring to her adult daughter Lisa, who died of cancer a few weeks ago. Lisa was expected to live long enough to see the completion of the mural but didn’t, according to her mother.

The mural was created in Lisa’s memory by Elsa Ali, an artist who lives on the block. It is part of “Art in the Alleys,” a project in Clarke Square that turned a trash-strewn alley into a public art space. Prior to the project, the alley on South 26th Street between West Scott and West Mineral contained nothing more than garbage cans, an occasional graffiti scrawl, bare garages and a mishmash of fences. 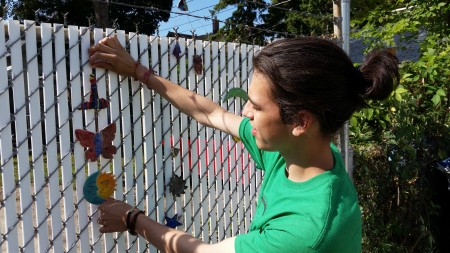 The alley is now decorated with murals painted by volunteer artists and hanging ceramic medallions, most of which were created by neighborhood residents.

“The alley is now full of symbols of hope and beauty,” said Lori Gramling, who runs a ceramics studio on the block with her husband.

Gramling, her daughter in-law Janelle Gramling and neighbor Thomas Shropshire had been working on art projects with neighborhood children for years. A few months ago they decided they wanted to get even more people involved. They brought their idea to beautify the alley to the Clarke Square Neighborhood Initiative (CSNI), which agreed to fund the project and bring in more partners including the city’s Neighborhood Improvement Development Corporation.

“We saw this as a big win because the project was resident-driven and leads to social connections, increased public safety and many other elements that improve the quality of life for residents in the neighborhood,” said Ian Bautista, executive director of CSNI.

The project quickly grew to include Highland Community School, youth from TRUE Skool and the Epic Center Community Organization, as well as neighborhood youth and adults who worked for weeks to create the ceramic pieces that now dot the alley.

“One day we had five people working on it; the next week 50,” said Shropshire, who went door to door asking local homeowners for their permission to paint their garages or help create the art.

In the end, dozens of children and residents gathered in the alley to celebrate the makeover. Gramling said she hopes that word of the project spreads to more residents and that artwork will fill more alleys, including one nearby that also had a mural painted recently on a garage.

Ali and her daughter Izabella, 14, vow to continue to be involved.

“We’re going to keep going until the supplies run out or it’s so cold the paint dries,” Ali said.