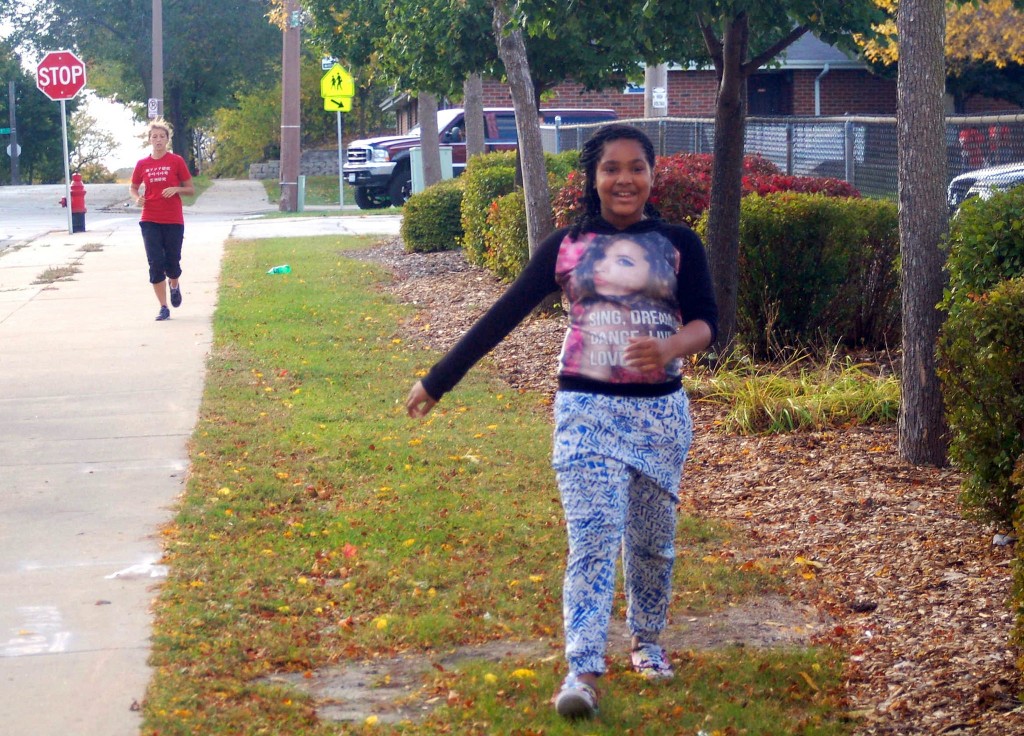 A participant in Kids Run Milwaukee rejoices as she finishes her last lap of the day. (Photo by Allison Dikanovic)

The thudding of feet hitting the concrete grew louder as a group of seven middle school students rounded the corner in front of Dr. Martin Luther King Jr. School, huffing and puffing. The runners paused as they finished their lap, and their labored breathing switched to laughter and another burst of youthful energy in just a few minutes.

The students from King, 3275 N. 3rd St., are just a fraction of the more than 120 students voluntarily participating in the Kids Run Milwaukee program this fall, an outreach effort of the first annual Milwaukee Running Festival, in partnership with the Boys and Girls Clubs of Greater Milwaukee.

“We wanted to spread running to areas of the community we feel are underserved,” said Chris Ponteri, founder and executive director of the Milwaukee Running Festival.

Volunteer coaches are teaching proper running technique and holding regular practices at nine Boys and Girls Club sites throughout the city for the six weeks leading up to the Milwaukee Running Festival on Oct. 31 and Nov. 1. All of the participants will receive new running shoes, entry into the one-mile race and a medal, courtesy of the Argosy Foundation.

“This is our first attempt at something like this,” said LaNelle Ramey, director of athletics and recreation for the Boys and Girls Clubs. He said it’s important to teach running because it is “something (the students) can do on their own on a regular basis.”

Both Ramey and Ponteri said that Kids Run Milwaukee is also a way to address health disparities. “We are hoping this program can spark a healthy initiative in our families,” Ramey said. 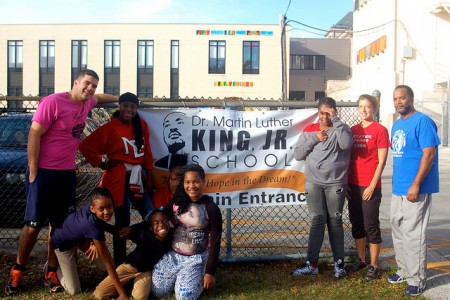 Dr. Martin Luther King Jr. School is one of nine Boys and Girls Club sites hosting running clubs leading up to the Milwaukee Running Festival. Other sites range from elementary to high schools in different parts of the city. (Photo by Allison Dikanovic)

Yusef Salameh, a teacher at Dr. Martin Luther King Jr. School and one of the volunteer running coaches, said he hopes participants gain a sense of self-confidence and self-worth from the program.

Kids Run Milwaukee is one way the Milwaukee Running Festival is working to engage with residents in different neighborhoods.

“The (festival) event is for the entire city,” Ponteri said. “It is reflective of Milwaukee’s neighborhoods and cultures, and we are proud of that.”

In addition to the mile race, the running festival will include a health and fitness expo, 5K, half marathon and marathon. According to Ponteri, Milwaukee was the largest city in the country without a major marathon. He said the marathon route “goes through just about every area in the center of the city,” including neighborhoods such as Concordia, Metcalfe Park, Sherman Park, Martin Drive, Menomonee Valley and Clarke Square.

Ponteri said that he is excited to showcase different areas with the route. “Milwaukee has neighborhoods that aren’t known to a lot of people in the city,” he added.

Festival organizers have been meeting with neighborhood associations and other local groups to communicate how the course will affect their streets. The event planners are also encouraging neighbors to staff the aid stations and host celebrations on the morning of the race.

“Everyone is excited,” Ponteri said. “Most people we’ve talked to have embraced the festival.”