Fidel Verdin was tired of looking at vacant lots in the Harambee neighborhood so he decided to do something about it.

The neighborhood resident organized an effort to create a park on an empty lot on the corner of Dr. Martin Luther King Jr. Drive and West Ring Street. 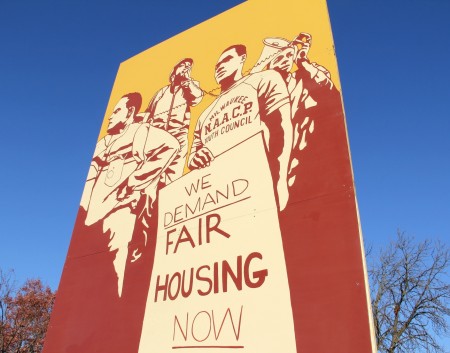 “This is an open-source learning space that will be ever-evolving,” Verdin said. “Our big thing is educating the community about different ways to activate areas in their neighborhoods.”

Two large murals mark the park’s entryway. Each depicts the struggle for fair housing laws in the city. The works, by artists Nicolas Lampert and Paul Kjelland, were formally presented to the public in a recent ceremony, featuring appearances by the widow of Fr. James Groppi, Peggy Rozga, Milwaukee Commandos leader Prentice McKinney and Claudette Harris, another veteran of the civil rights movement.

The park was made possible through a team effort that included representatives from Summer of Peace, HeartLove Place, Milwaukee School of Engineering, Groundwork Milwaukee, the City of Milwaukee’s Home Gr/Own initiative, Walnut Way, the University of Wisconsin-Milwaukee (Community Design Solutions and Architecture 350) and Growing Power.

“This was just an abandoned green space for 20-plus years,” Verdin said. “I want the young people in the neighborhood to understand that, with a determined idea, you can take nothing and create something.”