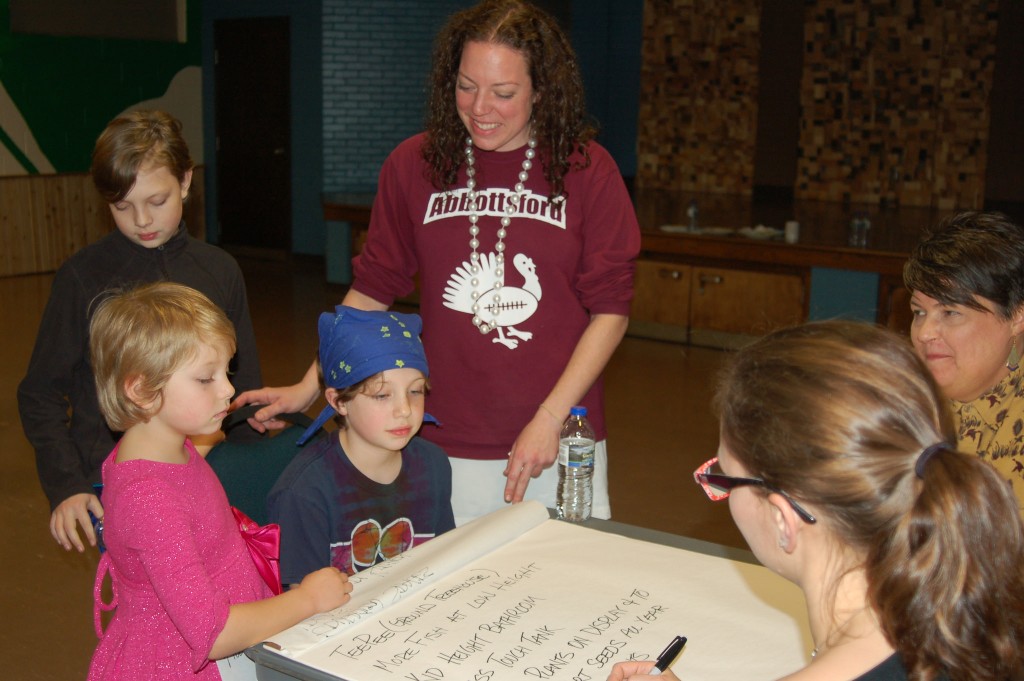 (From left) Beatrix (in pink), Loralei and Vivian Madson tell Quorum architect Kate Edwards (right) what they would like to see at the redesigned Washington Park Urban Ecology Center as their mother, Stacy Madson (center), looks on. (Photo by Andrea Waxman)

Six-year-old Beatrix Madson suggested hollowing out a log and making it into a slide with a long window on top. She and sisters Vivian, 9, and Loralei, 10, bubbled over with ideas for renovating the Urban Ecology Center in Washington Park, including a non-gravity room, bakery, more plant displays and edible plants, and kid-sized bathrooms.

“How about a tall fish tank with a slide around it,” added Vivian.

The sisters and their parents joined about 30 community members, as well as representatives of Quorum Architects, Milwaukee County Parks and Urban Ecology Center (UEC), to discuss a planned Washington Park branch renovation. The architecture firm, selected from three invited to submit proposals, stimulated the brainstorming session with a slide presentation of beautiful indoor and outdoor structures and spaces from other locations near and far. 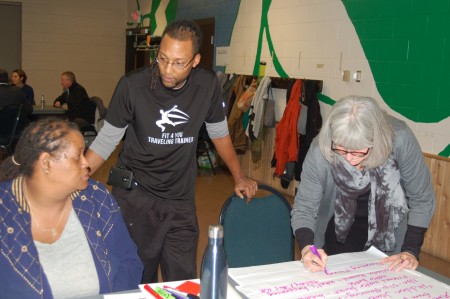 Stacy Madson, who home schools her daughters, said she brought them to expose them to how such a project takes “persistence, a long vision and hard work,” she said. The girls regularly participate in the Menomonee Valley UEC’s Young Scientists Club.

Originally, there was a boathouse on a large lagoon in Washington Park where UEC is now located, at 1859 N. 40th St. That was later replaced by another boathouse and then, in the mid-1970s, with a recreation center. The Urban Ecology Center rented a third of that building for its second branch in 2007 and then, two years ago, expanded to the entire building, according to Judy Krause, UEC director of finance and operations.

“Since we signed a new lease in 2013 we’ve been thinking of expanding (further),” Krause said. The branch began holding meetings to discuss the renovation in fall 2014. Now Quorum Architects and community members are contributing their ideas to a shared vision for the building that will lead to a budget and a fundraising plan, she added. It will likely take two to three years to complete the project, according to several sources.

Dozens of ideas were offered, including a more visible and welcoming building and building entrance; a community kitchen suitable for cooking classes; a tower offering an overhead view of the park; outdoor classrooms; a petting zoo; and a winter outdoor café.

Guy Smith, chief of field operations for Milwaukee County Parks, said he is excited about the renovation and wanted to be involved. He said he especially likes the ideas offered by the children who attended. Smith added, “I’m a kid at heart and I love the slides and tree houses.”