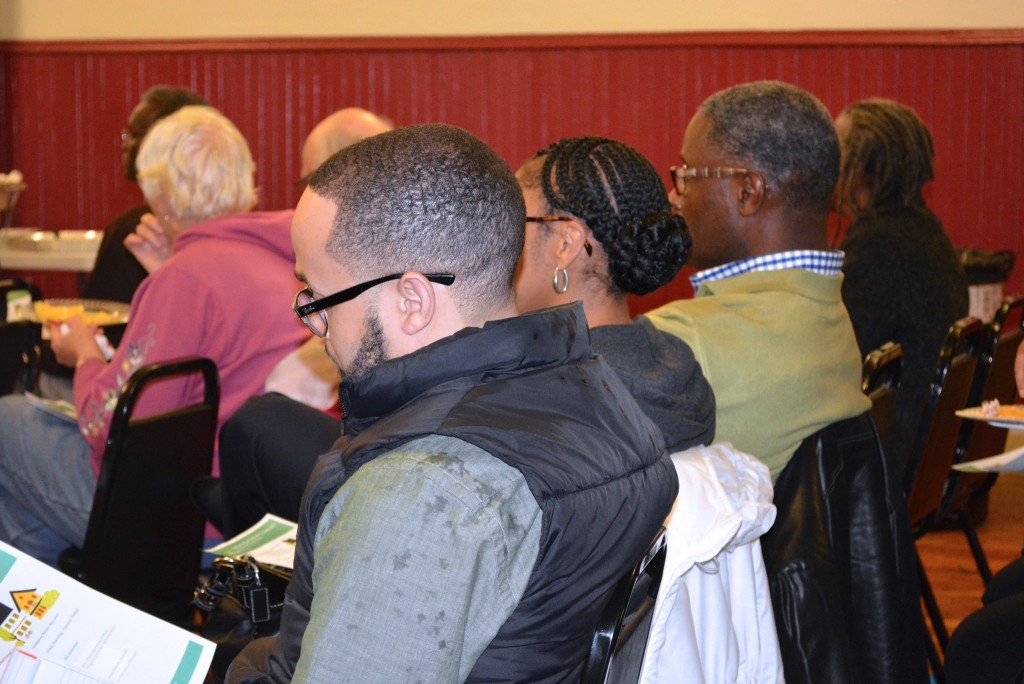 Lindsay Heights residents gather to hear plans for a new commercial redevelopment project coming to the neighborhood. (Photo by Marlita A. Bevenue)

When nearly 100 Lindsay Heights residents gathered recently to discuss commercial redevelopment in their community, it became clear early on what many of them want in the area: access to a high-quality grocery store, recreational venues for youth, and a school that offers vocational and trade classes for adults.

The meeting featured a suggested blueprint for redevelopment with colorful images and drawings presented by the UWM School of Architecture and Urban Planning Campus Design Solutions team. The sketches were designed to give residents an idea of possible commercial developments including trendy restaurants and nightlife entertainment venues, a fitness center and health care clinic. 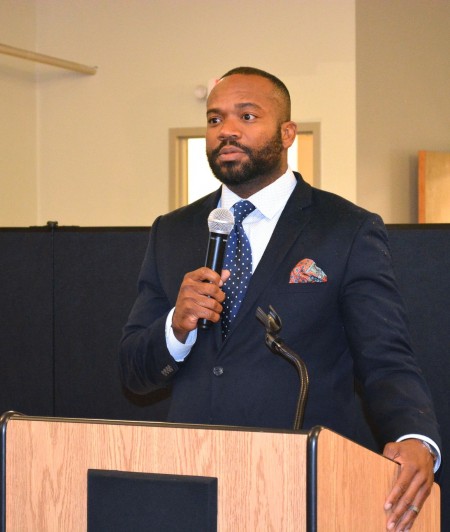 Ald. Russell Stamper II offers his support for a revitalization plan for Lindsay Heights. (Photo by Marlita A. Bevenue)

“This particular neighborhood has been disinvested in for well over three decades,” said Ward, who led the discussion. “It’s time to turn that around and revitalize this area. The commercial corridor on North Avenue and Fond du Lac is right off the freeway and is a prime location for many businesses.”

Local investors Lenny Chu and Stephen Green purchased the Sears, Roebuck & Co. building, now known as the Milwaukee Mall, on 21st Street and Fond du Lac Avenue. They came to the meeting to share their ideas on commercial space in the area, including a plan to convert the building into an MATC campus.

Since Chu and Green purchased the property in February, they have been approached by developers to turn the building into affordable housing or assisted living apartments, but the businessmen have a different vision for the space.

“You can build apartments anywhere,” said Green. “Today, over half the people who go to MATC come from the North Side. They shouldn’t have to leave their neighborhoods just to travel all the way downtown or West Allis to take classes.”

Green said he has talked to Ald. Russell Stamper II about the plan. His next steps are to talk to MATC management and City Development Commissioner Rocky Marcoux, who was at the meeting.

Some people participating in the discussion urged local investors to consider bringing a new grocery store or supermarket to the area, while others talked about the need for youth to have places to gather after school and on weekends.

“I grew up with a movie theater and a skating rink in my neighborhood,” one woman told the group. “That was over 40 years ago, but where do kids go nowadays? We need to bring those social activities back to our neighborhoods.”

According to Ward, the meeting was the first step in the redevelopment process for Lindsay Heights. “This neighborhood is worth the investment, and we want the people who live here to be involved in the rebuilding plans every step of the way.”