Though Fit 4 You traveling trainers Robert and Jolie Brox were still setting up their equipment in the community room at the Urban Ecology Center in Washington Park and the “community boot camp” wouldn’t start for half an hour, participants were already arriving.

The women and men of varying ages seemed familiar with the space and the routine. They greeted each other and began walking or running slowly around the room to warm up on a recent evening.

The Broxes’ daughters, Mulaja, 4, Ndaya, 3, and Nyemba, 2, hopped and danced through a “ladder” laid out for an exercise routine on the floor.

In addition to improving health, the class provides a community and “many networking opportunities,” said Wendy Winston, a college friend of the Broxes and Fit 4 You class participant “since the beginning,” she added. 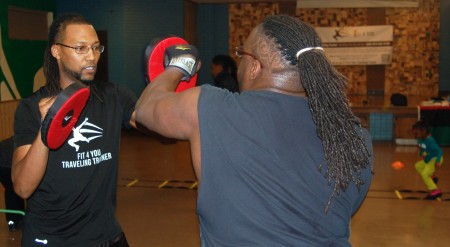 Committed to bringing low-cost professional physical training and knowledge of good nutrition to the central city community where Robert was raised, he and Jolie started Fit 4 You five years ago.

In addition to the total body workout session they offer in Washington Park at 6:30 every Tuesday evening, they also take their knowledge, experience and equipment to people’s homes and offices for personal and small group fitness training and injury rehabilitation. “We bring the gym to you,” is their company tagline. Making and selling fruit and vegetable juices also is part of their program.

Robert, 33, a health promotion and wellness graduate of the University of Wisconsin Stevens Point, met Jolie, a journalism major, when both were college students. He played football and ran track and after graduation worked as an assistant football coach at his alma mater. He then spent three years working for a fitness consulting company in Milwaukee.

But Robert grew up “in what is considered to be the worst neighborhood in the state, 53206,” he said. Noting that that characterization arises from the deficits in the 53206 ZIP code on the city’s North Side, Robert said Fit 4 You is intended to bring health and wellness education to the couple’s own North Side community.

Jolie’s family emigrated from Congo when she was a just one year old. After a brief stint in Madison, they settled in Milwaukee.

Each community boot camp class begins and ends with a 10-minute warm-up and cool-down period consisting of walking and stationary stretches. This is followed by a 35-minute circuit-style training session that targets lower body, upper body and abdominal/core muscle groups, Jolie explained. Classes cost $5 per session and package deals are available at discounted prices.