You are here: Home / Home / Carousel / Rebuilding Together keeps elderly, disabled in their homes, stabilizes neighborhoods
Share this... 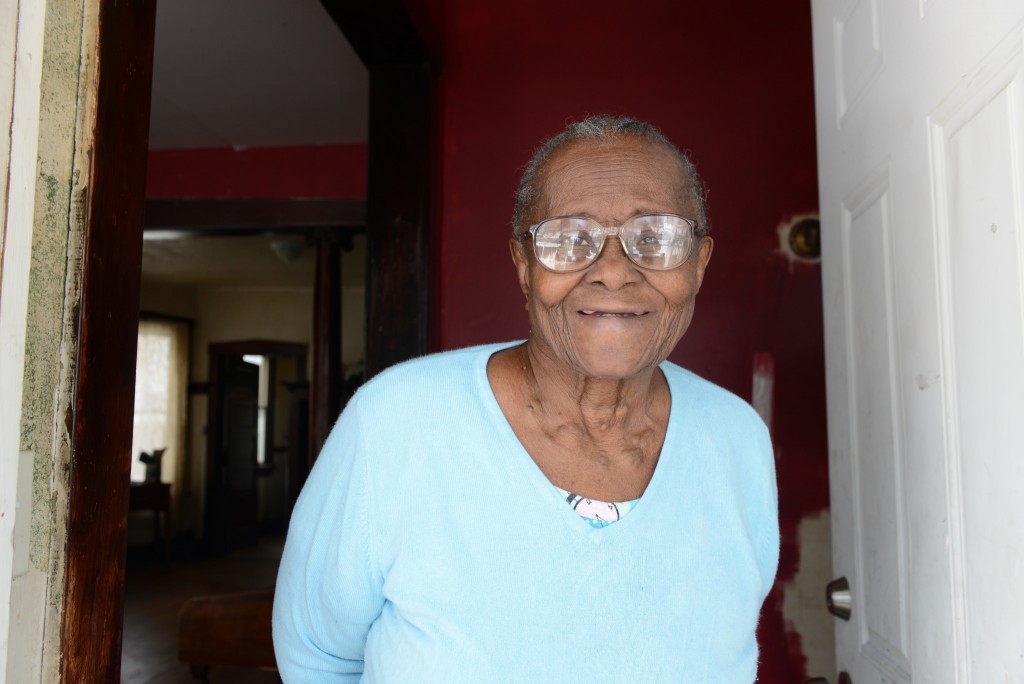 Geraldine Tate’s home on the North Side has been renovated by Rebuilding Together Greater Milwaukee. (Photo by Sue Vliet)

Editor’s note: This article is one of an occasional series profiling the 15 finalists for the Milwaukee Awards for Neighborhood Development Innovation (MANDIs). Rebuilding Together Greater Milwaukee is a finalist for the PNC Bank Trail Blazer Award, which recognizes an innovative approach to a community problem.

Since 1965, Geraldine Tate’s home address has not changed. The longtime Harambee resident raised seven foster children in her place near Fourth Street and Keefe Avenue. By 2013, her home was badly in need of repairs.

“Between my foster kids and maintaining my job… I really didn’t realize how much I had let the house go down,” she said.

The windows had to be replaced and the bathroom needed to be remodeled. The problem was that Tate, 84, could not afford the renovations. “I just had no way to get the money to fix this bathroom and it really needed fixing then.” Tate feared that she could lose her home and be forced to move. When she attended a community meeting, Tate learned about an organization dedicated to keeping aging adults living in their homes by providing repairs for free.

Rebuilding Together Greater Milwaukee provides free home repairs to veterans, seniors and people with disabilities. Representatives from the organization visited Tate’s home and completed the renovations. Beyond the changes to the windows and bathroom, workers identified other needed repairs, such as installing new flooring, water pipes and a sink, to ensure that Tate could continue living safely in the home on her own.

Tate noted that the RTGM staff checked in with her after they made the repairs to make sure she was satisfied. That showed the team’s dedication, she said. 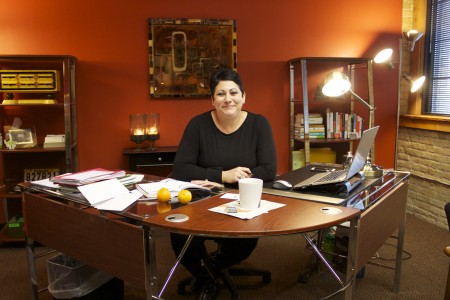 Lynnea Katz-Petted is CEO of Rebuilding Together Greater Milwaukee, an organization dedicated to helping Milwaukee residents age in the communities they love. (Photo by Emmy Yates)

Bruce Elliott, executive vice president of commercial lending at Tri-City National Bank, volunteers for RTGM doing home repairs. The most rewarding part of volunteering is being able to help individuals remain active in their neighborhoods, he said. “These are people who have given blood, sweat and their time to their community,” he said. “It’s time to give them something back for what they’ve done.”

Since the Milwaukee chapter of the national organization was founded in 2000, RTGM averages 500 volunteers a year and has invested more than $10 million in almost 1,500 properties. RTGM is funded almost entirely from private donations and grants. The expansion of the organization’s budget, from $42,000 in 2005 to more than $1 million today, allowed it to move from serving 14 properties per year to more than 300.

The organization hires 17 local contractors and has seven full-time staff members. Staff members meet with homeowners to assess specific needs and connect with other organizations that can help.

Minor changes to a home, such as adjusting the height of a toilet or installing a ramp, can have a large impact. “You’d be surprised what a difference an inch can make,” said Lynnea Katz-Petted, CEO of RTGM.

The changes also empower homeowners to continue investing in their local communities. Tate is thankful for the freedom of owning her own home, which allows her foster children and foster grandchildren to visit at any time. She makes big meals of meatloaf, collard greens and cornbread for her visitors, who share the memories that come with returning to the place where they grew up.

When individuals are forced to move to assisted living facilities, properties are left vacant, neighborhoods suffer and taxpayers pay more, Katz-Petted said. “These neighborhoods would be a lot worse off if the people who’ve lived there for 30 or 40 years left.”

Paying for home modifications is especially difficult for individuals on a fixed income. According to a study by the Milwaukee County Department on Aging, 18 percent of Milwaukee seniors do not have, or are not confident, in a financial plan. Nearly a quarter of seniors are not certain that they will be able to cover expenses in the next 5 to 10 years. Home repairs or improvements are often overlooked in favor of paying for food or medication. Offering these services at no cost benefits homeowners and neighborhoods, said Jonette Arms, interim director of the Milwaukee County Department on Aging.

“People can stay in the community that’s familiar to them and with people they may have known for many years, so they can stay connected,” Arms said.

Each situation is unique, whether people are experiencing diminishing physical abilities or having trouble paying bills. “It’s surprising but we still get calls from people who haven’t had hot water for two years,” Katz-Petted said.

RTGM works with homeowners to determine what can be done to keep them living in their neighborhood. The organization can put them in contact with local food agencies and also partners with Social Development Commission for weatherization repairs.

Nina Johnson, senior vice president at Guaranty Bank and a member of the RTGM advisory board, praised Katz-Petted’s efforts to work with other groups. “She goes above and beyond,” Johnson said. “The amount of impact they’ve made in the community, and to do it without a cost to the homeowner, is incredible.”

To receive help from RTGM, applicants must own their homes, fall within established income guidelines and be up to date on property taxes. Volunteers usually complete the repairs within 30 days. Elliott said he especially enjoys being able to sit down with homeowners and learn about their lives. These interactions can often be emotional, he said, as homeowners struggle to put into words what it means to be able to stay in their homes.

RTGM’s biggest challenge is raising awareness about issues facing veterans, the elderly and people with disabilities, Katz-Petted said. “I don’t think there is a lot of help out there for the people who built our city and the people who kept us safe.”

RTGM will host its first Block Build MKE on May 20-21. In other years, the one-day building event focused on completing projects across Milwaukee County. This year, however, RTGM is focusing on one block, between 17th and 18th streets and Lloyd Street and Meinecke Avenue. Nearly 1,000 volunteers will be present, Katz-Petted said, providing critical repairs to at least 15 homes and completing other projects, such as new lighting or mailboxes, at another 15 to 20 homes.

“Once we leave that block, the whole thing will be revitalized,” Katz-Petted said. “Hopefully, everyone’s spirits will be lifted.”