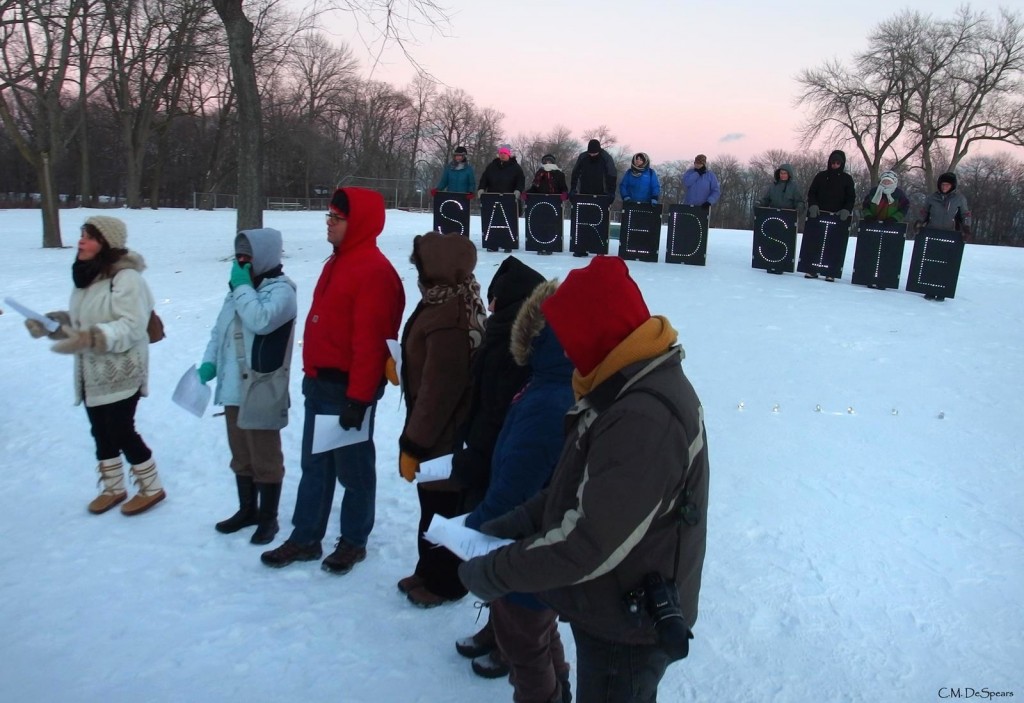 Margaret Rozga, poet, civil rights activist and professor emerita of English at UW-Waukesha, writes that sacred Indian mounds in Wisconsin, including one in Milwaukee, would be destroyed if proposed state legislation moves forward.

Near the deep cold blue lakes in the Bamyan Province of Afghanistan, rugged mountains rise dramatically. For 15 centuries these mountains were home to two immense statues of Buddha, one 170 feet tall, the other almost 140 feet tall.

When the Taliban destroyed these statues in March 2001, people around the world gasped at the audacity and felt outrage at the destruction of these works important to Buddhists, and to the cultural heritage of the world. These statues were marvels of human creativity, and they were irreplaceable.

Very near the long stretch of life-giving blue at Milwaukee’s lakefront, there is another cultural and sacred treasure, an Indian mound, even older that the Bamyan Buddhas and also irreplaceable. I went to the site of this mound, at Lake Park, on a cold Tuesday. There I joined with Native American leaders and scholars, poets, the Overpass Light Brigade and others who support the Ho-Chunk in defending their sacred sites, places important to the cultural heritage of the world, especially of all of us who live in Wisconsin.

I stood in the cold to read a part in a cento, a poem that drew together the voices of many poets, lines that speak to our conviction that money is not everything, that human culture and creativity are to be embraced, celebrated and protected from the outrage of destruction. In the words of poet Allison Hedge Coke, “Our wealth abounds / within what we preserve.”

I felt outrage in 2001 when the Buddhas were senselessly destroyed. I feel it again now. Sen. Chris Kapenga (R-Delafield), Rep. Joe Sanfelippo (R-New Berlin) and other sponsors of the bill display a disregard for the cultural heritage that doesn’t fit their own narrow definitions.

One problem with the bill is that if human remains are found, then their burial site has already been disturbed. Another problem is that even if excavation uncovered no human remains, there are other reasons to value these mounds and to refrain from compromising their integrity as important heritage sites.

AB 620 is specifically intended to force the Historical Society to excavate a mound on land outside of Madison, owned by Wingra Stone and Redi-Mix, Inc., where many such mounds were destroyed before passage of the 1986 law.

We’ve had enough destruction. We also have enough ignorance, a fault that I own up to for myself.

Before this action, I did not even know of the Indian mound in Lake Park though I have lived in Milwaukee virtually all of my life. Others who gathered there on that cold Tuesday also said they had only recently learned of this sacred site within their own city. I write at least partially to bring about greater awareness throughout the city of the treasure that lies so close at hand. As schools teach Wisconsin history, I urge them to include lessons on the Indian mounds, including the one in our own city.

More immediately I write to express support for those who value these mounds that exist nowhere else in the world and to oppose this shortsighted measure. The good news is that after the Jan. 12 protest at the State Capitol and the protest in Lake Park, AB 620 has been tabled, which means that it will not immediately advance.

Given the Republican-led legislators’ hostility toward the accomplishments of Wisconsin’s recent progressive past, I suppose I should not be surprised at their cavalier attitude toward a more ancient past, toward the remaining evidence of cultures whose people took care of this land long before the arrival of Europeans. But I am surprised, astonished and alarmed.

Some destruction is beyond the pale. We saw that clearly when the destruction happened half a world away. I write, I speak, I gather with others who are concerned, so that this ill-considered proposal to force destruction close to home may be seen for the similar outrage that it is.