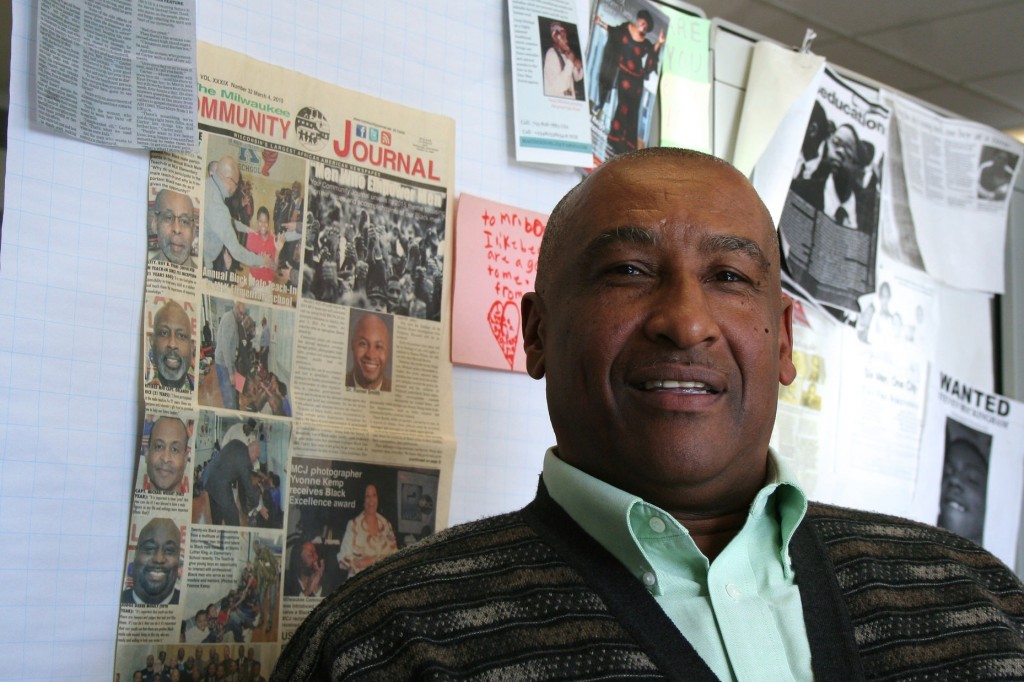 Rodney Bourrage created Operation DREAM in 2006 after 20 years of teaching and other community work. (Photo by Jabril Faraj)

Editor’s note: This article is one of an occasional series profiling the 15 finalists for the Milwaukee Awards for Neighborhood Development Innovation (MANDIs). Rodney Bourrage is a finalist for the Northern Trust Navigator Award, which recognizes individuals for leadership and collaboration.

Davon Carter, 14, has never known his father — he left when Davon was a year old. He and his younger brothers were raised by their mother. Then, when Davon was 12, that all changed. “She basically couldn’t take care of us no more,” he said, “She didn’t have a lot of money and we were very bad.”

Davon’s brothers went to their grandparents’ house; Davon went into foster care. “When I first came to foster care, I always had an angry look on my face, and I never liked to talk,” he said.

Davon then went to live with Melissa Carter, who adopted him in November 2014. By that time Davon was participating in Operation DREAM. “Just being in this program with all boys, keeping them active, getting out and doing stuff in the community, he loved it.”

Rodney Bourrage founded the mentoring program for at-risk boys in 2006. Bourrage, who had taught and worked in the community for 20 years, saw a need for role models, particularly males, in the central city. The organization serves more than 300 boys, ages 4 to 18; 97 percent are African-American. 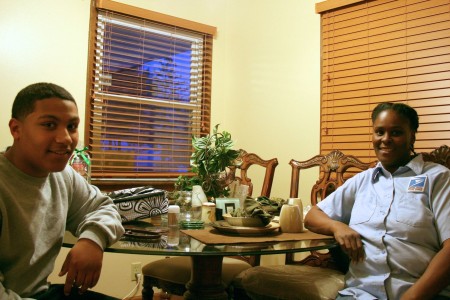 “When I was young, there were people there for me. There was the teacher, the preacher, the neighbor, the older siblings, the older neighbors, my parents’ friends — everybody was there,” said Bourrage, who grew up in the 53206 ZIP code during the 1960s. “Now … you have shady characters.”

Even though he had support, Bourrage had his own challenges. He wasn’t a great student; he “didn’t do a whole lot of studying or learn how to study.” Bourrage said his father told him from a young age that he would play football at Michigan or Ohio State, so he immersed himself in sports.

“I was a good student, you know, as far as conduct, but wasn’t the best academically and didn’t know how to excel. My father had a third-grade education and my mother, she had graduated from high school and had some technical college,” he said. “Academics wasn’t something that was really big as far as enhancement, enrichment.”

Bourrage, who graduated from Washington High School, eventually did learn how to study. After flunking out of UWM and UW-Eau Claire, working in a Milwaukee factory for four years and starting a family, Bourrage returned to UWM and graduated in 1987. Later, he completed a graduate degree in cultural education, also from UWM.

But none of that diminished his love for sports. “It was kind of like an outlet from … poverty and being poor, growing up poor,” he said. “You always had positive activities, you always had people that were there for you.”

In 1989, Bourrage began coaching baseball at Beckum Stapleton Little League, near North 8th and West Brown streets. Shortly after, he started coaching soccer and basketball, as well. The basketball team included boys from the central city and from the Jewish Day School.

Bourrage said it was difficult, even then, because he knew about the barriers the young black boys would face. “I knew a lot of the Jewish kids … would end up being very productive people in life — doctors, business owners, lawyers,” said Bourrage. “And, a lot of these boys playing ball with them, on the same team, a lot of them wouldn’t be around — they would be dead or in jail.”

“I can name 10 black boys that are dead from gun violence,” he said. “Our boys are dying in the streets.”

For Bourrage, the urgency could not have been more pronounced. But he was only scraping the tip of the iceberg. “They were still dying. I knew I had to do more.”

So, 10 years ago, he created Operation DREAM. The organization began with Saturday programming at the Boys and Girls Club and field trips, including trips to ballgames, Discovery World, horseback riding, college visits. “Member Support Coaches,” mentors who work with 12 to 15 boys, help to manage the boys’ lives “as a parent would,” making daily phone calls, weekly home visits and taking the boys to do fun activities.

Larry Willis, the first of five coaches, has been involved in community work for more than 20 years, putting young men in his neighborhood through military drills, working with St. Charles Youth and Family Services and the Social Development Commission.

“I like success stories,” said Willis. “And, I look at the youth nowadays; if you think about it, the odds are stacked against them.” He added, “There’s a tremendous need for people to really interact with these boys.”

“I knew I needed a gym to keep these boys focused, keep that carrot and keep them coming,” he said. “Once they had a gym, things were fine. But, as we found out, as the boys got older … the gym didn’t keep them engaged — they needed money.”

According to Dan Parman, an advisor to the Operation DREAM board, once the boys turned 12 or 13, they were disappearing from the program. Parman, a business owner and philanthropist, had connected with Bourrage through a board member. They talked and, in 2010, Parman sold his interest in the company he owned at the time to help create Operation WORK.

The program, which operates alongside the mentoring aspect, trains the boys in work skills and provides them with work experience, including cleaning up the neighborhood, working at camps, landscaping and more. Once the boys turn 14, they can get work permits and can do internships at Milwaukee businesses such as Gruber Law Offices, the Jewish Community Center and the Green Team.

“You know, most of these kids, they just don’t have a support system. They have no choice but to go into the street,” Parman said. “They might be smart … there’s just nobody there for them … And, given a choice, a lot of these boys are making good choices.”

Bourrage called Operation WORK the “flagship program for our teenagers.” He said the ultimate goal is to instill a work ethic, morals and an understanding of the value of education. “We try to let the boys know that they have options, that they have these people that care about them and that are going to be there for them,” he said.

“These children, they need consistency, they need structure in their life,” said Bourrage. “That’s what they want, and what they really deserve.”

Antwan Powell, 20, has been a part of Operation DREAM since he was in fifth grade. Powell, who does maintenance for Schlitz Park and now works as a mentor on weekends, also grew up without his father. “A lot of the kids now, believe that what they see outside is just what they’re gonna get,” he said. “Everyone was willing to tell me what to do; no one was really willing to give me guidance and help me understand why it is I’m doing what I’m doing.”

“Mr. Bourrage gave an alternative to what I saw out in the community,” said Powell.

“I want the kids to know they’re just as good as anybody else … that [they] do have a purpose here on earth to achieve, and that you have to know and search for that purpose,” Bourrage said. “Then, you have to work hard to make sure you’re fulfilling those dreams.”

Bourrage said that all the community and volunteer work he’s done over the years brought him to where he is now. Even though he called Milwaukee a “war zone,” he said, “Now, there is a light at the end of the tunnel.”

Powell said he tries to give the boys “the understanding that Mr. Bourrage gave me” because, even though he won’t be around forever, what he’s teaching can be passed on. “For anyone who really wants to understand the program … they need to speak to these boys, they need to hear stories,” Powell said.

Melissa Carter said Bourrage and Operation DREAM have helped Davon’s behavior and grades in school. “[He’s] very respectful, now,” she said. “They said he’s a big brother to a lot of the boys.”

Davon, who said his favorite part of the program is “just being there,” is looking forward to college; he wants to work with computers and become an Air Force pilot. And that anger he felt? It’s not there anymore.

“Sometimes, I would have nightmares,” he said. “Every time when I fell asleep, my dreams would be the same thing, of how [my father] left.”