You are here: Home / Neighborhoods / North / Amani / DOJ listens to stories of police abuse from Milwaukee youth
Share this... 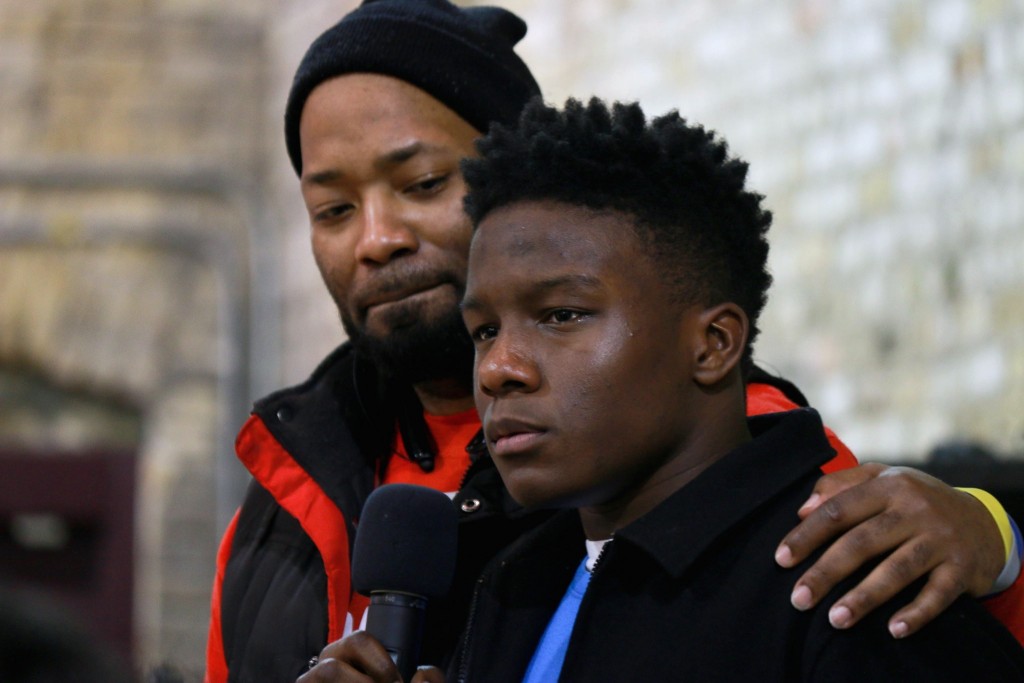 Silas Sanders talks about being thrown on the ground by local police, with a gun to his head, while doing his daily chores. (Photo by Jimmy Gutierrez)

The takeaway from a recent U.S. Department of Justice listening session about youths’ interactions with Milwaukee police was unanimous and resounding: there’s a lot of work to be done.

About 125 people of all races attended the event, where one teen shared his terrorizing experience on Thursday, Jan. 21, the same night as the DOJ’s first listening session in Milwaukee.

“Me and my mom were coming home, and I was just moving garbage cans, and out of nowhere police come up on me with guns,” said 15-year-old Silas Sanders. “It’s (one) thing to see a gun on TV, but to see a gun in front of you, you don’t see that everyday.”

Silas’s mother, Diane Sanders, said she and her son were heading home after she picked him up from choir practice. He hopped out of the car to move their garbage cans so she could park in the garage. When she came out of the garage she heard commotion.

“I come out and I just see my child on the ground with a man on his back, cuffs to him, gun on his head, head on the ground,” Sanders said. “This is the second time he’s been accosted on his own property doing nothing but chores. He was shoveling snow a year ago and they pulled up on him saying he fit the description of a burglary suspect. He didn’t want to go back outside after that.” 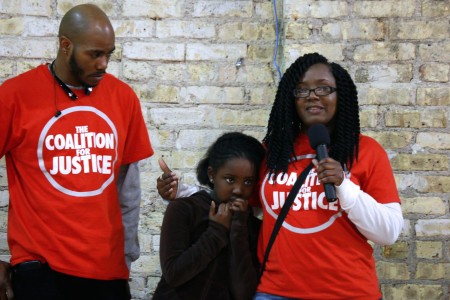 Markasa Chambers (left) and Nate Hamilton, co-founder of the Coalition for Justice, comfort Zoe Chambers, 8, as she tries to speak to the group. (Photo by Jimmy Gutierrez)

The listening session for youth was sponsored by the Coalition for Justice and the DOJ’s Community Oriented Policing Service, or COPS, at the Wisconsin Black Historical Museum. This is the second event of what is being called a “collaborative reform,” which is examining the Milwaukee Police Department’s policies, practices and training. Police Chief Ed Flynn requested the process, which was entered into voluntarily by MPD.

Another speaker was Paulara Davis, 25, the older sister of Christopher Davis, who was fatally shot in the head by a Walworth County sheriff’s deputy on Feb. 24. Authorities say officers confronted the occupants of a vehicle in the parking lot of Roma’s restaurant in East Troy, in what is being called a drug investigation. Of the four people in the car, Christopher Davis was the only African-American and the only one shot.

“This problem has hit home with me. I’ve never thought that this whole Black Lives Matter movement would hit this close to me, this soon,” Davis said. “I have a daughter and going through this, I’m scared to leave the house. (She’s) only 10 months and I don’t want to live in Milwaukee anymore.”

The city was ranked as the worst place for blacks to live by the business website 24/7 Wall St. last October. One of the major findings was the difference in high school graduation rates for white students compared to black students. The 14.2 percentage point difference is nearly double the national average. The disparity in median income between white ($61,675) and black ($25,646) households is also one of the nation’s largest.

Darryl Gibson, who coached football on the North Side, said he would stick around after practice until all the kids got home after witnessing police harassing his players.

“It really has to be changed how society perceives us, how MPD perceives us, and not how to deal with us, but how to interact with us,” said Gibson, who is black. “They’re here to serve and protect. There is no serving and protecting. There’s militarization. They’re a threat to us and our safety.”

Flynn told local media earlier in the day that the youth testifying might have been hand picked by the Coalition for Justice, which was formed after a police officer killed Dontre Hamilton in April 2014. He went on to say that the youth would have a chance to “speak their truth, not necessarily the truth, but their version of the truth.”

After hearing a few dozen first-hand testimonials, which included poems, stories of racial profiling, and elected officials pleading for help, Troy V. Williams, an official with COPS addressed the audience.

“This is powerful and difficult to hear,” said Williams. “I was saying that the one girl looks like my daughter. I understand what you’re all saying.”

Williams said the first round of goals and objectives from COPS will be made public within the next week on the COPS website. Community members are invited to submit public comments by emailing Milwaukee.crita@usdoj.gov.

Jimmy Gutierrez joined News414, a collaboration between Wisconsin Watch, Milwaukee Neighborhood News Service and Outlier Media, in March 2020. As engagement manager, he is connecting with Milwaukee residents to respond to their information needs and generate news coverage that addresses their concerns.