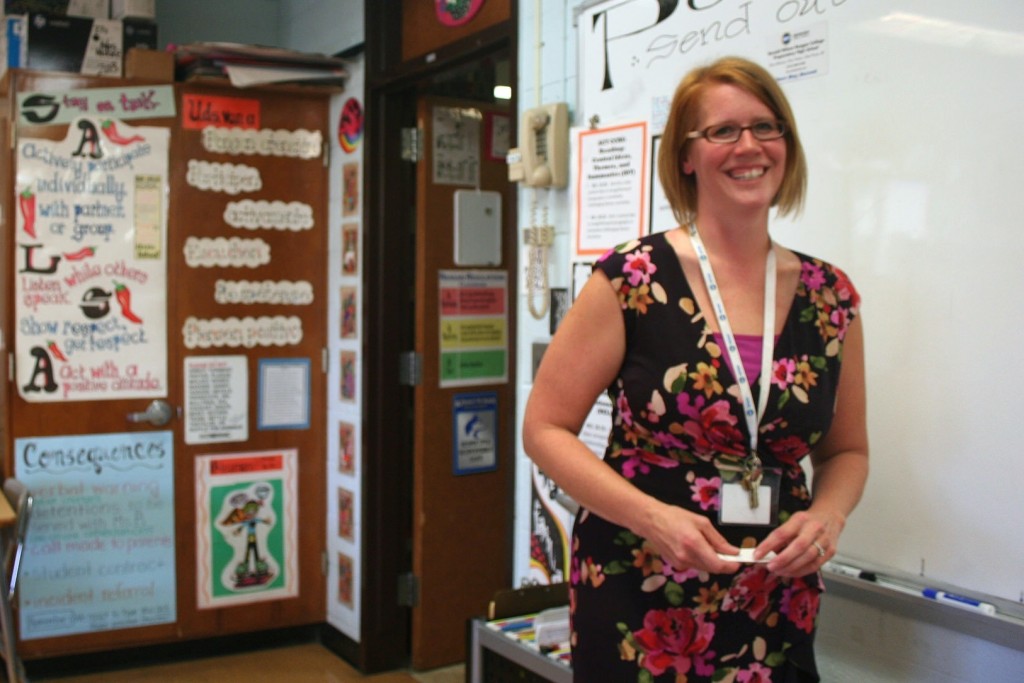 Sarah Moore, who won a prestigious national teaching award in 2013, has taught in Milwaukee Public Schools for more than 10 years. (Photo by Jabril Faraj)

Sarah Moore didn’t become a teacher because she had one who changed her life. Unlike many people, Moore didn’t have that influential teacher, one whose name she still remembers.

“I went into teaching because I don’t remember a single high school teacher’s name,” she said. “I always wanted to be different than the teachers that I had and, somehow, create learning experiences that [the kids] would enjoy.”

Moore, teaches Spanish and critical thinking at Ronald Reagan High School. In 2013 she, won the prestigious Milken Educator Award, considered by many the “Oscar of Teaching.” Last year, Moore was chosen to be one of 27 teachers from around the country to take part in the Lowell Milken Center’s fellowship program.

“We look for teachers who can challenge their students in innovative ways,” said Norm Conard, executive director of the Milken Center. “She’s just an outstanding educator. And … she cares a great deal about children, and about how they learn.”

Moore’s own school experience was not ideal. She said she was “a terrible student” from 5th to 9th grade, and even dropped out of the University of Wisconsin-Milwaukee (UWM) after a semester before going back to college three years later and eventually graduating from Cardinal Stritch University.

“I think I was kind of depressed,” said Moore of late middle school and early high school. “Not a single teacher noticed that. There was never really a conversation about it.”

Moore neglected her homework, lied about doing it, threw away progress reports and feigned sickness during parent-teacher conferences so her mother didn’t find out. “I really played that game well,” she said.

Lori Paisley, Moore’s mother, said that during that early stretch Moore was dealing with the death of her grandfather, with whom they were both very close. Paisley said it was “really a big blow.” 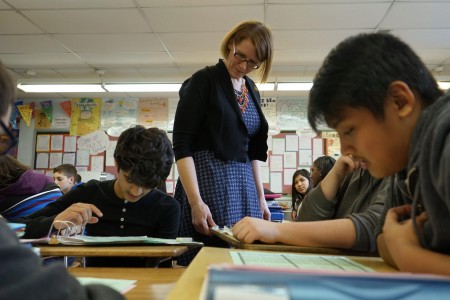 Sarah Moore observes students during a Spanish 1 class she teaches for freshmen and sophomores at Ronald Reagan High School. (Photo by Adam Carr)

Christina Ramirez, a close friend of Moore’s, said Sarah “reaches the top and she wins these national awards, and she’s recognized for her work. But, she’s also had some very low, lows,” Ramirez said. “I think, when you live your life so much to the fullest … you allow yourself to get really sad, and to get really hurt because you are so full of compassion.”

Moore didn’t have very many friends during her first year of high school. Eventually, she found one — the girl was a swimmer — and joined the swim team. That changed everything. Though her academics didn’t come along overnight, Moore kept her grades up enough to stay on the team.

“Being part of a team, it’s that sense of belonging,” said Paisley. “I think … that she had to commit to something and that not only was she committing to it but [that] she was belonging had a big impact. And, she developed some really good friendships from being on that swim team, some that she still has today.”

For the last five years, Moore has taught Spanish and MYP Design, a critical-thinking and problem-solving course that focuses on preparing students for real-world decision-making. That course, Moore said, is about teaching students to be effective human beings, effective students and global citizens.

“We’re looking at bigger, larger-than-life skills, not just putting ourselves into a little box,” she said.

But, for Moore, connecting with her students comes first. Before every class, she greets students at the door with a smile — her motto is “positivity is pervasive” — and, during class, she makes sure to engage them in multiple ways, with lessons that extend beyond the classroom.

Steve Glaeser, a former colleague at Reagan who now works for ThinkCERCA, an education company made up of former teachers, said he often observed Moore; their rooms were adjacent to each other. “She valued, from the very first day, the connection,” said Glaeser. “The kids knew about her life and she invested time to learn about them.”

Moore said, “Without having that connection with a student, if they’re not interested in the subject matter … all bets are off.”

She’s also extremely organized. She writes a “to-do” list on Post-it notes — no more than three to a note — and everything in Moore’s room has a place. Moore, who called herself “a work in progress” when it comes to organization, was not as neat earlier in her life. She said having everything planned out makes it easier both for students to learn and for her to teach.

That sensitivity to what her students are going through, Paisley said, is one quality that sets her daughter apart. “She really has a keen awareness for if a child’s struggling with something, because … she’s been there. And, she wants to help them not only obtain the best grade they can obtain but just help them become the best person they can become.”

Moore makes sure to engage her students in a number of ways, because every student learns differently. In her Spanish classes, which are 85 minutes, Moore said she tries to include 10 to 12 different learning experiences — listening, speaking, writing, reading, interacting and more. She also makes sure not to lecture for too long.

“I have to be creative whenever I lesson plan to honor all of the different types of students that are in my classroom,” said Moore. “And, I think, that’s one of my favorite parts of the job.”

Paisley believes some of that sensitivity came from Moore’s grandparents, who were both teachers. “She’d see how her grandmother taught and … whether she realizes it or not, I do think … that did influence her,” Paisley said.

Moore’s students said she understands how each of them learns and that she keeps learning interesting and fun. “She’s my favorite teacher I’ve had in a long time,” said Mackenzie Stelpflug, a freshman in Moore’s Spanish 1 class. “She cares for every single student in the class. She makes the students want to learn. She never leaves a student behind, no matter how far she needs to go.”

Maureen McCanna, who student taught in Moore’s classroom at Reagan and now teaches middle school social studies in Colorado, said Moore’s dedication to her students is what drives her. “She’s at school until later, she brings her work home and dedicates a lot of time outside of school,” McCanna said. “Her goal is to make every student successful … She, really, is incredibly intentional in the way that she teaches.”

Glaeser said Moore’s energy and care for her students is infectious and inspires those around her to be better. He noted, “It’s not a job for Sarah, it’s a calling.”

While Moore’s goal has been to keep her students interested and excited about learning, every day is an adventure for her, as well. “I truly think it’s the best profession in the world — I love it. I can’t imagine doing anything else, I really can’t. I thrive off of every day, all the interactions with students, seeing them grow, seeing that progress.”

To Moore, failure is inevitable. But it isn’t bad — it’s a learning experience. The most important thing is to always be working toward the best version of yourself, she said, adding, “There’s always a way to get better, and to improve, and to change.”