You are here: Home / Home / Carousel / Carmen student travels to Japan to join discussion about world peace
Share this... 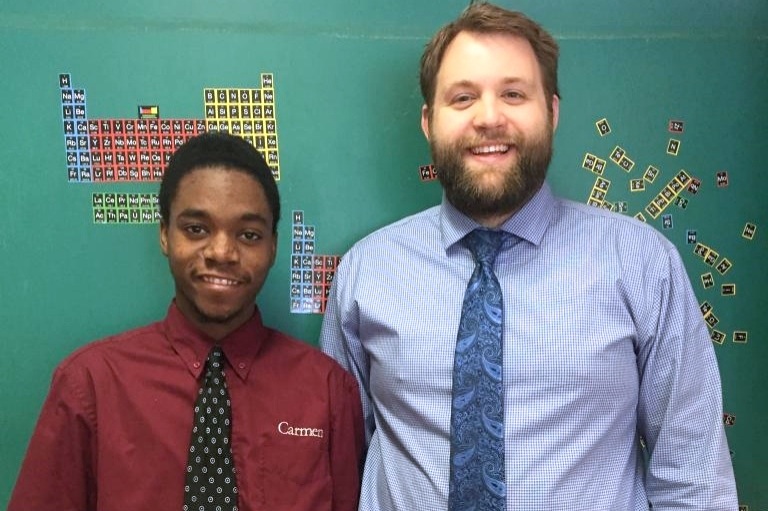 Without the help of his chemistry teacher, Andrew Linderman (right), Alvin Watts would not have been able to take a trip to Japan. (Photo courtesy of Liz Hein)

Alvin Watts, a 16-year-old sophomore at Carmen Northwest High School, is one of two U.S. students selected to be part of a Group of Seven (“G7”) Youth Summit designed to create conversations about international peace.

Before he left, Watts said the trip is a chance to change global perspectives about America and bring stories back to his home on the South Side and his school. “(The trip) means the whole entire world to me,” he said. Being selected to join the summit has already benefited him. “This has definitely given me a lot of confidence.”

Twenty-four teens, 12 from Japan and 12 from the other G7 countries —the U.S., Germany, Canada, France, Italy and the United Kingdom, were chosen for the summit, from March 18-21. Participants were expected to draft a “Hiroshima Declaration” after discussing what young people can do to help realize a more peaceful world. About 140,000 were killed as a result of the atomic bomb dropped by the U.S. on Hiroshima in 1945. Watts and the other young people were scheduled to visit the Peace Memorial Museum and meet with survivors. 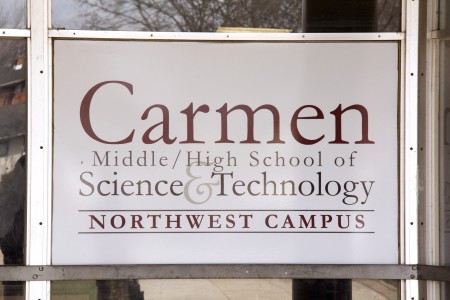 Watts’ father dreamed of visiting Japan. After his sudden death, Watts carried on that wish.

“Alvin’s very vocal about that dream,” said Liz Hein, dean of students and culture at Carmen. “And I told him that it paid off.” Watts said that he would not have had this opportunity if not for Hein, who learned about the conference on Facebook.

Maurice Thomas, vice curator of the Milwaukee Global Shapers Hub, posted the notice that Hein saw. Thomas chaperoned Watts in Japan and said he was impressed with him from the moment they met. “He’s a dreamer,” Thomas said. “He’s one of those kids who has a twinkle in his eye.” Thomas is the founder and executive director of Milwaukee Excellence Charter School, scheduled to open in the fall.

Global Shapers is an international organization started by the World Economic Forum for people between age 20 and 30. The group organized the youth summit to coincide with Shape Asia Pacific 2016, a global conference focused on peace.

Traveling abroad with Global Shapers changed Thomas’ life, he said, and he thinks it will do the same for Watts. “Having the ability to share that with another kid in Milwaukee — and he’s a sophomore in high school — that’s amazing,” he added. Thomas wants the experience to empower Watts when he returns home. “I hope he demands that there are more opportunities like that for him and his classmates.”

The opportunity to visit Japan and realize a long-held dream was almost lost to Watts because of passport trouble. Watts has lived in Milwaukee with his uncle since his father’s death, but his uncle did not have legal guardianship. Before Watts could get an expedited passport to go on the trip, his uncle needed to receive temporary guardianship.

“I was really sad because I thought I wasn’t going to be able to go,” Watts said.

After the guardianship issue was resolved, Andrew Linderman, chemistry teacher at Carmen and Alvin’s adviser, drove Watts to Minneapolis to get his passport, less than a day before Watts was scheduled to leave.

The process of getting Watts’ passport was “unreal,” said Hein, who added that she is thankful it worked out. “There’s no one more deserving of this trip than Alvin.”