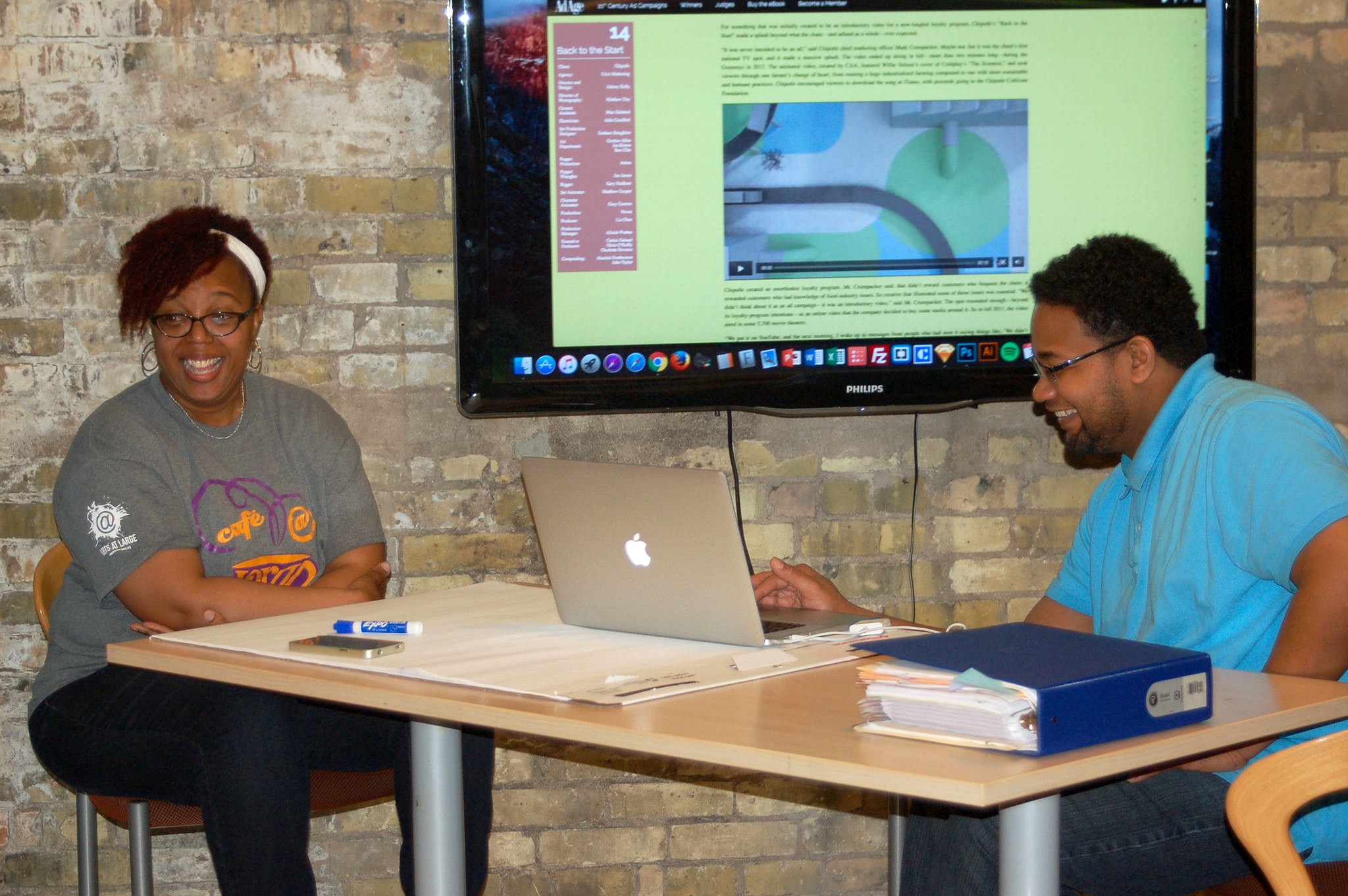 MKEGrind owners Sylvia and Thomas Wilson lead a workshop on branding for students at the Arts @ Large Gallery. (Photo by Andrea Waxman)

The six teens looking at the large computer screen behind presenters Sylvia and Thomas Wilson alternately hop up and down in their seats with excitement; seem to doze, with heads rested on outstretched arms; and tilt their heads reflectively, searching for answers to the questions posed.

They are gathered in the colorful Arts @ Large gallery and café, 908 S. 5th St., for an after-school session on branding, part of a career development program the Wilsons took over in January through the Café @ Large program, currently in its second year.

Founders of MKEGrind, a for-profit, “social enterprise” devoted to helping young people find, develop and achieve their personal and career goals, the Wilsons launched the business after winning the UWM Student Startup Challenge in 2014. MKEGrind was one of 10 winning proposals chosen from 80 submissions. Winners were given start-up funds of $2,500 to $5,000, and mentoring on becoming entrepreneurs.

The Wilsons, who grew up in poverty on the North Side, want to reach kids who live “where we came from, kids who had no opportunities,” said Sylvia Wilson.

“We feel like we were missing this kind of guidance when we were growing up,” she added. Their biggest regret is that they did not have someone to help them understand how to get where they wanted to go, the Wilsons noted.

Evan Sandherr, Arts @ Large special programs coordinator, thinks it’s important that the Wilsons have similar backgrounds as the teens in the program. 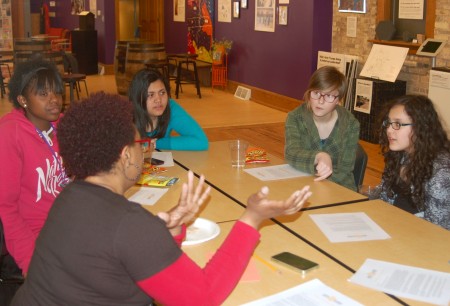 The Wilsons are inspiring the students and allowing them to explore where they fit in, Sandherr said. “It’s difficult to become something that you can’t imagine. How do you create a space where young people can imagine where they want to be and … make it happen?” Sandherr added.

Now in their late 30s and the parents of three young sons, the Wilsons come from self-described “rough backgrounds.” Thomas had the more difficult childhood, Sylvia said. His mother struggled with alcoholism; he lived with multiple families; and was homeless from the beginning of high school into his early 20s. To survive, he fell in with a group of drug dealers.

Sylvia’s family was also impoverished. She and her mother moved from the central city to Oak Creek and later Port Washington after her parents divorced. She graduated from Bay View High School, earned a bachelor’s degree in English from Marquette University, and a master’s in administrative leadership and doctorate in urban education from the University of Wisconsin Milwaukee.

The two met in their early 20s when Sylvia moved back to the North Side, “the only place she could afford” at the time, she said. Thomas stood out from the men hanging around her building and she soon had him going to church with her. They married and Thomas, who had always wanted to be an artist, started pursuing an education in graphic design, online and at UWM.

The Wilsons worked closely with the other nine winners of the challenge and with mentors from the university and local businesses. Initially they envisioned MKEGrind as a digital magazine aimed at central city teens. The magazine was intended to be video interviews of successful business people about how they became successful. But when their first subject backed out, they decided to focus on the workshops instead.

“We never wanted to be in the position of having someone able to stop us from moving forward,” Sylvia said. They had learned from their mentors that when they encountered roadblocks they had to find another way to approach their goals, she added.

The students in the Café @ Large program, in grades seven through nine, start with career exploration. At a recent workshop, participants brainstormed about businesses and institutions they will visit this summer to explore career opportunities. And in partnership with Anodyne Coffee Roasting Company, they learn professional barista skills and how to run the café.

“We hope they will end up with a pretty solid idea of where they are going and how to get there,” Sylvia said. “We would like to have them stay with the program through high school. We would like to establish long-term relationships so that they can come back for help along their journey.”

Greenleaf Baker, an eighth-grader at the nearby Vieau School, said when she started in the Café @ Large program, she was shy but now she feels more open and able to communicate. She described an assignment in which participants approached strangers at a market with survey questions. Baker said it was difficult at first, but “the more I did it, the easier it got. I had a really good time. I really enjoyed it.”

Andrea Hernandez, also a Vieau School student, moved here from Puerto Rico recently. “I made a commitment to myself that I will take advantage of every opportunity for my future,” she said about joining the program. The classes and field trips not only teach her new things; they also help her with her social skills, she added.

In August, the Wilsons will start working with an additional group of young people at Teens Grow Greens, a skill-building employment program that provides nine-month paid internships.

Sylvia, who teaches part-time in the UWM School of Education, believes that people underestimate what kids from disadvantaged backgrounds can do.

“I try to bring in some of the concepts I teach at the college level. I believe (our Café @ Large participants) have the ability to analyze and create if they are given the opportunity to do so.” She added, “I don’t think we often offer them those opportunities.”